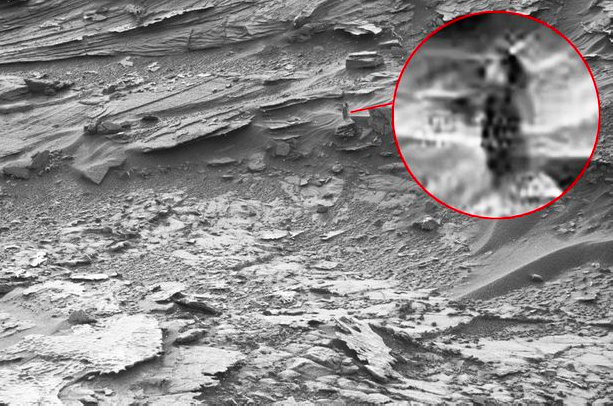 A photograph taken by NASA’s Curiosity rover appears to show a mysterious figure and a cave dwelling, prompting speculation about what is being depicted.

NASA's Curiosity rover, a car-sized robot decked out with cameras and environmental sensors, has offered scientists and the public fascinating insights on Mars since it landed on the red planet in August 2012.

The space agency recently launched an interactive website that allows you to drive Curiosity around, examine the planet's topography and learn more about the mission of the Mars Exploration Program, which is gathering data to help find a landing site for the Mars 2020 rover mission. Eventually, this research will pave the way to coordinate a manned mission in the 2030s.

On Earth, meanwhile, people have been scratching their heads over a photo, taken by the Curiosity Rover, that appears to show a human-like figure standing on a rock, Inquisitr reports. Another nearby formation resembles a cave dwelling.

The figure in the photo, which has circulated on Twitter and in discussion forums, has been called the 'Dark Lady,' sparking speculation about whether it's a hoax or a visual processing error. The following video shows the clearest images of the 'Dark Lady.'

The 'Dark Lady' surfaced only days after another mysterious photo from Mars shows what's been dubbed a "space crab," which is as terrifying as it sounds.

An astronomer at the Center for SETI Research said the "space crab" visions are an example of pareidolia, where the brain connects apparent forms with recognizable objects.

Whatever the 'Dark Lady' is, she's a great reason not to go to sleep tonight. Instead, take some time to delve into the Experience Curiosity site and learn more about the Mars Science Laboratory mission.