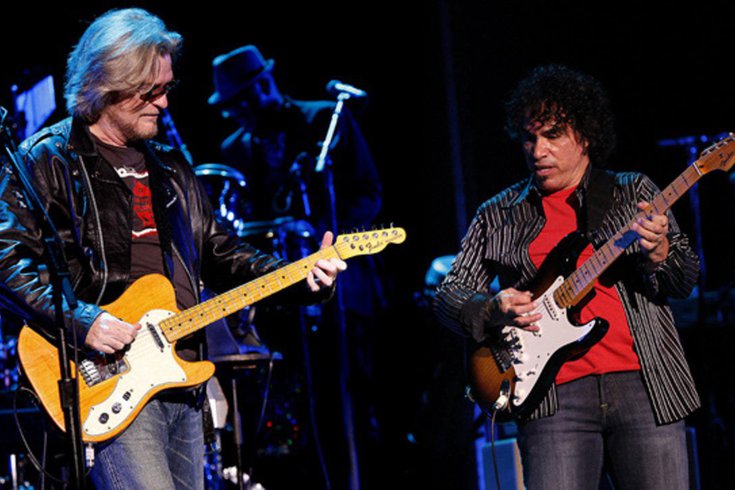 'Jimmy Kimmel Live' featured Philadelphia's Daryl Hall & John Oates on Wednesday, Aug. 18, 2021, singing their hit 'Rich Girl' during a recent tour stop in Massachusetts. The performance marked the first time the duo, who met as students at Temple University, were on late-night television in more than five years.

Daryl Hall and John Oates still got it!

More than 50 years after the chart-topping due joined forces in Philadelphia, Hall and Oates were on "Jimmy Kimmel Live" on Wednesday night to sing their hit "Rich Girl."

The performance, filmed during a recent tour stop in Mansfield, Massachusetts, marked the first time in more than five years that the Rock & Roll Hall of Famers had appeared on late-night television. Hall brings the energy on the keys and vocals, as expected, while Oates wows the crowd with an extended guitar solo at the song's conclusion.

And then there's the kaleidoscopic image of a $1 bill that rotates on gigantic monitors behind the band.

The only thing missing, really, was an encore. Watch the performance below:

Hall and Oates, who met while students at Temple University, played just one show on a tour they had planned for 2020 before canceling the remaining dates due to the COVID-19 pandemic.

When the tour picked back up this year, the duo stopped by Philadelphia to headline HoagieNation 2021 with special guests Kool and the Gang, Squeeze, the Wailers, Craig Robinson and the Nasty Delicious, the Soul Survivors and Down North.

"We really had a cool show planned. And so because we had invested time and energy into that show, we kind of just put it in mothballs, basically. And now we’re bringing it back up because no one’s really seen it," Oates told the Associated Press.

"I think there’s definitely going to be an energy there that is very unique. No one’s ever experienced a time like this in our modern world," he added. "Quite honestly, this is the longest I have not played live in my entire professional career."

Luck for us, they're back on the stage – and sounding as good as ever.