How concerning is the COVID-19 Delta variant? Americans share worry, but 'move on' from pandemic in new poll 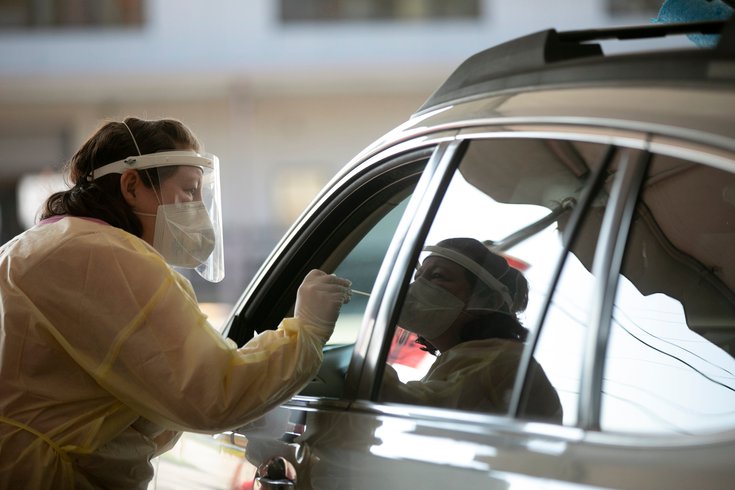 The Delta variant of the coronavirus is expected to soon become the dominant strain in the United States, where COVID-19 restrictions have been lifted across most of the country. Above, a testing site in Ohio.

The global emergence of the highly infectious Delta variant of the coronavirus has prompted public health officials around the world to reevaluate COVID-19 mitigation policies.

Even as vaccination rates continue to rise — in the United States, about 46.8% of the population is fully vaccinated — there are growing fears that outbreaks are going to hit pockets of the country where immunization is comparatively low.

The Delta variant was first detected in India, where the pandemic has raged for months, and has since been identified in at least 85 countries. In the U.S., its prevalence has doubled over the last two weeks, now accounting for one in every five cases of COVID-19, compared to just 2.8% of cases over the two weeks that ended May 22.

"It is the most hypertransmissible, contagious version of the virus we’ve seen to date, for sure — it’s a superspreader strain if there ever was one," Eric Topol, a professor of molecular medicine at the Scripps Research Institution, said in an interview with Scientific American on Tuesday.

There is also some evidence to suggest that the Delta variant produces more severe illness and hospitalization from COVID-19, according to a Scottish study published in the journal Lancet. Data on how deadly the Delta variant is compared to previous forms of the virus remains to be determined in future studies.

Early research on the effectiveness of COVID-19 vaccines against the Delta variant suggests that those who are fully vaccinated likely have protection.

A preprint study by Public Health England found that two doses of the Pfizer vaccine and two doses of the AstraZeneca vaccine were 96% and 92% effective, respectively. Those numbers are similar to the rate of effectiveness against other variants, and it appears just one dose of these vaccines still also affords some level of protection.

Moderna announced Tuesday that its preliminary tests on blood serum from vaccinated individuals shows promise that the company's vaccine is effective against the Delta variant as well. Infectious disease experts are weighing whether the single-dose Johnson and Johnson vaccine may require a booster shot to enhance its effectiveness.

But as nations and cities across Asia and Australia enter another round of lockdowns, there is growing concern about whether vaccination rates can keep pace with the spread of the Delta variant. Even in the U.K., where vaccination rates are comparatively high, the Delta variant has quickly surged to become the dominant strain. The pattern is similar to the previous alpha variant in the U.K. that preceded a sharp rise in infections in the United States.

The World Health Organization last Friday urged continued mask-wearing even among vaccinated people, a measure the CDC has not embraced in the United States thus far. Across much of the U.S., mask mandates and other COVID-19 restrictions have been on the way out, including in Pennsylvania, where the state fully lifted its universal mask mandate this week.

In Philadelphia, where COVID-19 restrictions and mask requirements were lifted earlier this month, the health department has given no indication that the city aims to revert to mask requirements as a result of the Delta variant.

Acting Philadelphia Health Commissioner Dr. Cheryl Bettigole published an open letter last week warning about the risk of the Delta variant and the urgent need for vaccination rates to climb — sooner than later. Those who get fully vaccinated still need two weeks to reach immunity, and the variant will continue to spread in the meantime.

"Given the rate at which it has increased in the UK and in the US, we should expect the majority of infections to be Delta variant by late July," Bettigole said. "And that could mean another big increase in COVID cases and hospitalizations in Philadelphia. It could mean that, but it doesn’t have to."

A health department spokesman said the city is not planning any immediate changes to restrictions or mask guidance, but would not rule out reinstituting a mask mandate if case counts rise sharply and hospitalizations increase in Philadelphia.

Elsewhere, in Los Angeles County, public health officials have again recommended that masks be worn indoors, regardless of vaccination status, to protect against the spread of the Delta variant.

An Axios/Ispos poll released Tuesday found that 48% of American respondents were somewhat familiar with the Delta variant. Among those who knew about it, 72% said they are either somewhat or very concerned about the variant, yet only 55% of those polled said they are wearing a mask all or some of the time when they leave home. That's the lowest percentage since polling began in April 2020.

The poll included 1,065 American adults and was conducted from June 25-28. In the event of a new COVID-19 spike in their area, only 43% of Americans said they would self-quarantine and 57% said they would stop gathering with friends and family. Another 64% said they didn't consider their summer travel plans particularly risky.

"America’s moved on," said Cliff Young, president of Ipsos U.S. Public Affairs. "The way Americans perceive the world has changed because of the vaccine. The vaccine and, then, governments at every level saying it’s ok to go out: it’s those in combination."

Topol and other health experts told Scientific American that vaccination will remain the key to preventing a wider resurgence of COVID-19, especially in the fall and winter as infectious disease risk rises. New lockdowns and restrictions don't appear likely, so the focus will remain on ramping up vaccinations. This is especially true among younger people between 18-29 — the least vaccinated age group in the U.S., according to the CDC — who may be more likely to spread the Delta variant in the coming weeks and months.

Topol said the best-case scenario in the United States will be outbreaks of the Delta variant in certain parts of the country where vaccination rates remain low, rather than the massive surges across the nation seen last year and in early 2021.

"We’re going to likely see this patchwork phenomena," Topol said. "Certain places will light up, and hopefully they won’t light up too badly."