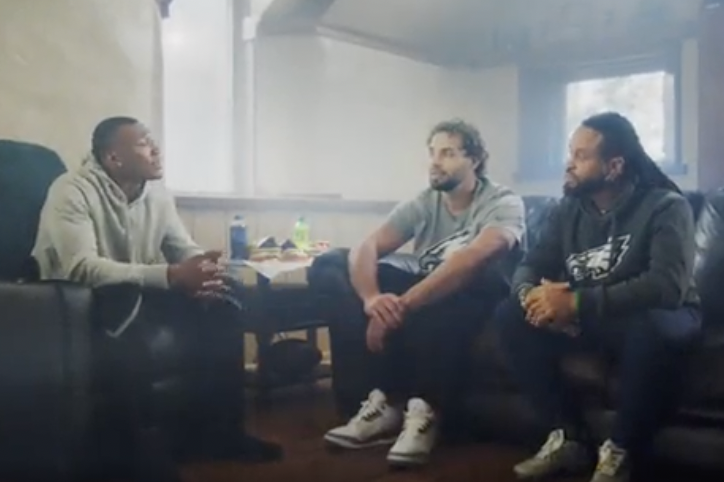 The Philadelphia Eagles' DeVonta Smith, Dallas Goedert and Avonte Maddox teamed up on a Wawa commercial ahead of the 2022 NFL Draft.

Eagles wide receiver DeVonta Smith kind of committed a Philadelphia sacrilege this offseason when he said he doesn't really care for cheesesteaks.

“Cheesesteaks and all that I feel like are kind of overrated,” the wide receiver said in a February interview with SiriusXM.

In a city with its share of pandering athletic figures, it's actually kind of refreshing that Smith doesn't go over the top to ingratiate himself with Philly fans. Athletes are kind of damned if they do, damned if they don't.

Last summer, the best bud duo of tight end Dallas Goedert and slot corner Avonte Maddox teamed up with Wawa for a fantasy football promotion. The silly commercial featured "The Dallas and Avonte Show," which basically just showed them living their best lives until they get bummed out because they forgot to order Wawa.

Ahead of the NFL Draft this year, Wawa revived the show with Smith as a guest. Goedert and Maddox are so obsessed with Wawa instead of the upcoming draft, that Smith has to gently break it to them that they are too enthusiastic about the convenience store.

And then Goedert and Maddox get all depressed about it.

The guys @goedert33 @2live_AM & @devontasmith_6  know the only way to celebrate being drafted is with us 💪 🦅  Win tix to a @Eagles game, lunch with players, autographed merch and Wawa swag including a $50 gift card on us, enter now: https://t.co/81P5VGFSgZ pic.twitter.com/8Sia5d0ufA

In the end, for the good of the team, DeVonta cheered his guys up by suggesting they make a Wawa run together. That's the kind of leadership Smith brings to the table.

The University of Alabama product and former Heisman Trophy winner paid dividends for the Eagles last season, setting a franchise rookie record for receiving yards and emerging as an NFL playmaker with a number of acrobatic catches.

This year's draft, from April 28-30, is probably the most highly anticipated in recent memory for Philadelphia. The Eagles now hold two first-round picks after completing a trade with the New Orleans Saints on Monday to stockpile extra picks over the next few years.

Smith, Goedert and Maddox all figure to be core Eagles players for several years to come. They can probably start offloading some of those Wawa runs to the next crop of rookies.