There was no fire and no injuries, according to SEPTA 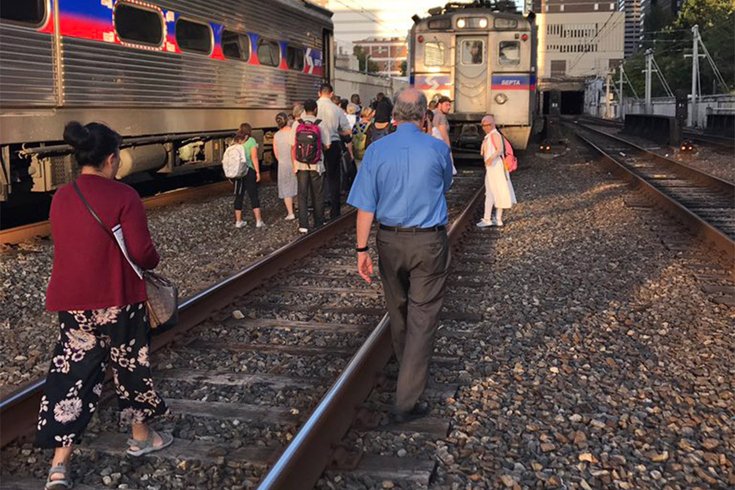 SEPTA Regional Rail riders walked along the tracks near the western entrance to the Center City commuter tunnel after a train had equipment problems during an afternoon rush hour.

SEPTA Regional Rail service through Center City has been restored after a disabled train temporarily halted it Wednesday evening.

A SEPTA spokeswoman told PhillyVoice that all but one line had resumed service both to and from the city, but that residual delays would remain. Inbound service on the Media-Elwyn line remained suspended due to unrelated downed wires, she said.

On Twitter, passengers said rumors of a fire aboard a halted Paoli line train headed from Suburban Station to 30th Street Station sparked a panic and a rush to exit the train.

So some of us just jumped off the Paoli Septa train because there was a panic about non-existent fire. pic.twitter.com/DgbVecLHNw

I was on this train. Wild stuff. People yelling fire and stampeding through the train. Quite the experience.

A SEPTA spokeswoman told PhillyVoice that some passengers "self-evacuated" the train, which had experienced an equipment problem.

There was no fire on the train and no injuries were reported, according to the spokeswoman, but the SEPTA still evacuated remaining passengers and halted Regional Rail service through the city as a precaution.

Easily 200-300 evacuate people from disabled train got on to our Rescue train. @septa conductors and transit police did a great job 1/2

Shortly before 6 p.m., the authority had advised passengers on Twitter that Regional Rail trains headed through the city would be delayed up to 90 minutes and possibly longer.

I'd rather crawl than continue riding SEPTA. I've sat on a train for nearly 2 hours now. We just moved backwards. Fix that before advertisin