Dodging tolls on the Pennsylvania Turnpike? You could be charged with a felony

Many of the worst scofflaws use Philly-area interchanges 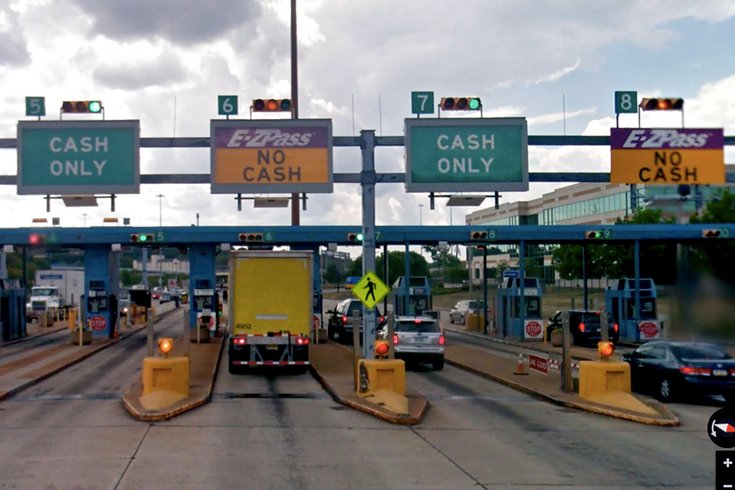 The cash and cashless E-ZPass lanes at the Fort Washington interchange on the Pennsylvania Turnpike.

Motorists in the habit of dodging tolls on the Pennsylvania Turnpike could find themselves facing criminal charges.

The worst offenders could face felony charges – and it's likely many of them regularly use interchanges in Philadelphia and its suburbs.

Last August, state law was amended to permit the Turnpike Commission to ask PennDOT to suspend the vehicle registrations of drivers with six or more unpaid toll violations or who owed $500 or more in outstanding tolls and fees. (There were more than 10,000 such drivers as of July 2017, officials said.)

Now the state is going after the worst scofflaws, those who drive through the highway's cashless E-ZPass lanes without a transponder to pay the toll, by filing criminal charges against them for theft of services.

The agency is enlisting local prosecutors to pursue felony-level cases against toll evaders who owe more than $2,000, according to a report Friday in the Wall Street Journal.

According to the Journal:

The state’s top 100 toll evaders each have more than $21,000 in unpaid tolls and fines. One driver is accused of racking up more than $90,000 in debts since 2012, mostly in snowballing fines, by using an E-ZPass-only lane more than 1,600 times without a valid transponder, according to a criminal complaint.

So far the commission has filed 13 private criminal complaints. A judge has approved a payment plan in one case, and the others are pending, Mr. [Ray] Morrow [chief of compliance] said.

As of June 2017, the 10,611 motorists eligible for suspension of their vehicle registrations owed the turnpike agency a total of $17.1 million. All told, those individuals were sent 280,855 violation notices and invoices.

About 52 percent of that $17.1 million was owed in three counties: Montgomery, Bucks and Philadelphia. Not surprisingly, those three counties racked up the most violation notices and invoices: Montgomery, 60,687; Bucks, 44,080; and Philadelphia, 32,307, the agency said. (See table  below of Top 10 interchanges with highest percentages of violations.)

Last summer, the agency announced a partial amnesty program to help motivate its top scofflaws to pay up before changes in state law allowed the suspension of motor-vehicle registrations.

“Our customers pay tolls so we can keep our roadway safe and in good repair and meet our obligation to PennDOT to help fund mass-transit services statewide,” Turnpike CEO Mark Compton said in a news release at the time. “Now, those who are habitually taking a free ride — both private and commercial drivers — will have to stop doing that, or risk a suspension. It’s simply not fair to those who do pay their fair share.”

Paper toll cards are used on much of the turnpike, but the commission continues to expand cashless tolling on its roads. Toll revenues, which total about $1.1 billion annually, are used to maintain and upgrade the highways and pay down the bonds used to build them.

It was Compton, according to a November report in the Pittsburgh Post-Gazette, who initially wanted to find out if criminal prosecution could help get those outstanding debts paid. Morrow researched applicable state law.

According to the Post-Gazette report:

Mr. Morrow, a former FBI agent, said prosecutors initially told investigators nonpayment should be considered a civil matter. But after researching the law, he convinced them that scofflaws could be prosecuted criminally for theft of services and is preparing cases against companies and individuals with unpaid tolls of more than $2,000.

The agency is going county by county to pursue cases against the top 10 scofflaws in each, beginning with Dauphin County, Mr. Morrow said. The case preparation is a detailed process that began four months ago, he said, and involves one major piece of evidence: photos the turnpike automatically takes of each vehicle that passes through the E-ZPass system.

Fares increased on the Turnpike by 6 percent in January, a necessity to pay for operations and annual improvements, officials said.

The new law last summer came a year after an audit claimed the turnpike commission's financial situation could lead to dire consequences.

That audit, conducted by the office of state auditor general Eugene DePasquale noted the commission lacked the power to collect unpaid tolls, which totaled $61.3 million in 2015-16. About $43 million remained uncollected at the end of 2015.

DePasquale noted then that other states had enacted legislation to force the payment of unpaid fines and violations by suspending scofflaws' vehicle registrations.

The commission "lacks the authority to deter drivers from skipping out on tolls,” DePasquale wrote in the 2016 audit. “What the General Assembly needs to do is provide the authority to suspend a Pennsylvania vehicle’s registration until outstanding tolls and fees are paid."

The audit had warned that inaction could lead to a financial and statewide transportation crisis by 2023.