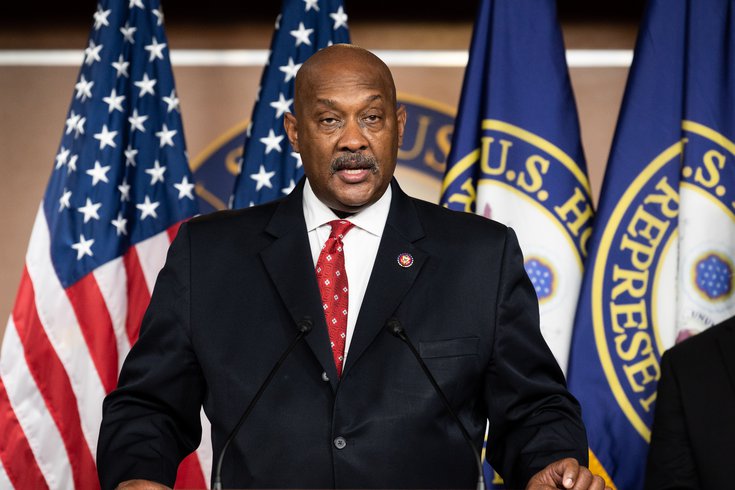 Congressman Dwight Evans revealed his $51 billion plan to prevent and combat gun violence in Philadelphia on Thursday. He will hold a virtual town hall on Friday to discuss it further.

Addressing gun violence in Philadelphia and other communities across the country requires an "all-hands" approach, Congressman Dwight Evans said on Thursday.

Evans unveiled his $51 billion proposal to address the gun violence crisis in a press conference held at Temple University Hospital. The seven-point plan aims to create community based programs to address the causes of violence and provide enhancements to local law enforcement.

"Over the last two years, Philadelphia and the communities across America have suffered from a surge in gun violence — a second epidemic," Evans said. "This is a national problem — it is not just happening here. I have co-sponsored and voted for legislation in Congress, but I wanted to look for ways to do more. This epidemic of gun violence demands an all-hands response — federal, state, and local government — and more community involvement. We must use all the tools in the toolbox to save lives."

Philadelphia is experiencing an influx of homicides and violent crime. Police data shows that the city saw 562 homicides in 2021 and has seen 145 so far this year. Danielle Outlaw, Philadelphia's police commissioner, told The Washington Post in February that the crisis could result in the loss of an entire generation of Black and Brown residents in the city.

The climbing homicide and gun violence rate has prompted the creation of programs and initiatives throughout the city aimed at using community resources and engagement to reduce it.

Evans' funding package includes some proposals that have already been introduced in the House of Representatives. A proposal for $1 billion in federal funding for local police departments is currently making its way through Congress in the VICTIM Act – co-sponsored by Evans and Florida Rep. Val Demings.

A $5 billion investment in community-based violence intervention programs is included in the Build Back Better Act, which is currently being reconsidered by the House of Representatives.

An additional $5 billion was proposed to address blight in the city and improve its environment. Efforts to repair or replace streetlights and other security measures, as well as housing assistance and improving the city's public green spaces, are just part of a holistic look at the causes of violent crime throughout the city.

State Sen. Nikil Saval, who represents portions of Philadelphia, introduced a bill that would establish a state grant program to fund housing repairs. The fund would allow low-income homeowners to make regular repairs to their homes, which could offshoot displacement. Some Republicans in the state Senate have already signaled bipartisan support for the bill.

In his plan, Evans detailed the efficacy of evidence-based strategies used by police to reduce gun violence, including focused deterrence. Using this strategy, police and community leaders engage with at-risk individuals and provide them with incentives and additional information in order to dissuade them from gun violence.

In this case, incentives include things like job training, workforce development, housing assistance and drug treatment. Leaders would also present the individuals with the knowledge of the "negative impacts" of violent behavior on them and their communities.

The plan includes details on increased police technology to focus in on crime hot-spots, which can be used in conjunction with focused deterrence in order to engage with the small groups of people responsible for shootings in a given community. In Philadelphia, 2% of known individuals are responsible for 80% of shootings throughout the city.

The PPD's hot spot initiative, Operation Pinpoint, includes 45 zones throughout the city. Outlaw has repeatedly praised the initiative for its success in reducing violence in parts of Fishtown, South Philly and Northwest Philly. However, violent crime has spiked in other parts of the city.

Evans' proposal would encourage local police departments to adopt focused deterrence and other evidence-based strategies for reducing violence in their communities.

The plan would increase resources for federal agencies like the Bureau of Alcohol, Tobacco, Firearms and Explosives, the FBI, the DEA and the U.S. Marshals Service. It would also seek to increase collaboration among different agencies at all levels of government.

Discussing the Hub model, Evans noted that "in order for this model to work most effectively, it needs the buy-in and participation of all relevant agencies and organizations, as well as more avenues for funding to increase personnel."

Evans will explain his plan further at a virtual Town Hall on Friday, April 22.