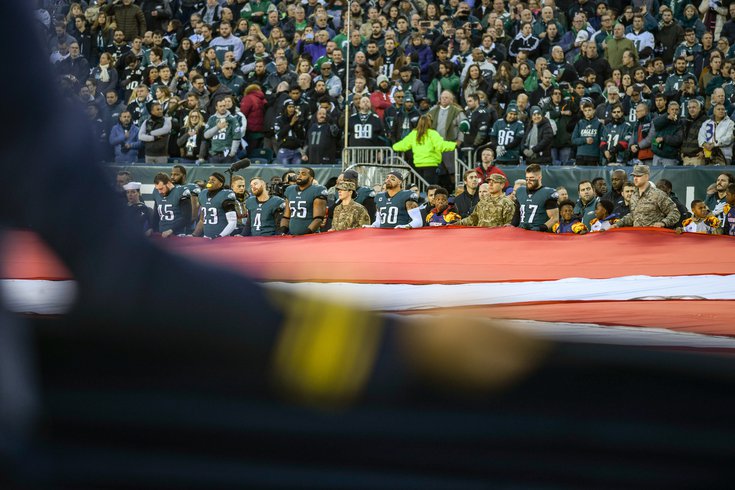 Eagles players and members of the military hold the flag before a wild-card game against the Seattle Seahawks.

Following the protests sparked by the death of George Floyd at the hands of Minneapolis police last month, there's again an expectation that many players around the NFL will take a knee during the playing of the national anthem this season as a way to protest police brutality and racial injustices across the country.

Eagles safety Rodney McLeod has already said that he plans on demonstrating again this year, and he expects the majority of his teammates to join him. Whether or not head coach Doug Pederson joins his players, however, remains to be seen.

On Tuesday, during a Zoom call with the Philadelphia media, Pederson was asked if he'd be demonstrating alongside the players on the sideline. And while he didn't give a hard yes or no, he made it very clear that he supports whatever his players decide to do.

"You're hearing a lot about it more and more, but one of the things as a head football coach that we are going to continue to do is have discussions in every area, not only with social injustice but the anthem, with anything that comes up," Pederson said, referring to the eye-opening conversations he's had with his players since Floyd's death ignited protests around the nation. "And that's one of the things that I think going into my fifth year with this football team, we have been able to have dialogue and conversation.

While that seems like a cop out answer from Pederson about whether or not he'll be protesting, it's actually the smart way to go about it. There's no need for him to commit one way or the other with a month still remaining before training camp, especially since he's likely going to want to talk to some of his veteran leaders about whether or not they'd like him involved, and if so, what that looks like.

For now, the most important thing for Pederson is to listen to his players, try to understand where they're coming from (when possible) and continue the dialogue that started in their team-wide meeting before they ever released a statement on Floyd's death.

That meeting, and the conversations he's had with his players since, have gone a long way toward bringing him a better understanding of not only what's happening but also why it's so important to so many of his players.

"Me personally, just the first thing I wanted to do is listen, listen to my players, listen to the guys that have feelings, have strong beliefs, and I want to understand everything that I can," Pederson said. "A lot of it's personal, for me, just hearing from the players -- and I don't want to get into a bunch of dialogue that way, but me just understanding more and more about what these players go through on a daily basis and what the black community, the African American community go through on a daily basis. And we are seeing it more and more, not only with sports but obviously in our communities.

"And so for me personally, it's just understanding that, and this is what I told my team several weeks ago, a couple weeks ago when we had a team meeting is I want to learn, I want to understand. I came from a world that didn't understand that. And so for me as an adult, I want to also be able to take the information and teach my own boys, for those of you that know my three sons.

"I love all our players, coaches, and that for me is what I've taken away is just the understanding and knowledge what have these guys go through on a daily basis."

These conversations are going to continue throughout the offseason and into the season, and it sounds like if the players want Pederson to protest beside them, he'd be open to it.

That actually wouldn't be all that shocking, considering that back in 2017 Pederson said he would join his players if there was a team-wide protest during the national anthem, which was a rather progressive stance at the time. However, it's worth noting that potential protest didn't involve anyone kneeling and Pederson had previously encouraged his players to stand for the playing of the anthem.

Back in 2016, after Colin Kaepernick became the first NFL player to kneel during the anthem in protest of police brutality and racial injustice, Pederson had the following to say:

[Pederson] did discuss the broader issue in a meeting with the full team and said he believes his players should stand during the anthem.

“But at the same time, I feel that [the national anthem] is important and it's obviously out of respect for the men and women of our country that sacrifice in order for us to coach and play this great game.

“So I get it. I understand it. But at the same time, I encourage everybody to stand.”  [nbcsports.com]

While Pederson made no mention of kneeling specifically on Tuesday, it appears that in the years since those comments — specifically in the last few weeks following deep conversations with his players — that the Eagles coach has softened his stance in regards to protesting during the anthem, and has begun to understand that Kaepernick and the players who followed were not protesting the flag or the military, but rather the systemic racism that has plagued our country for far too long.

Whether or not the head coach plans to take a knee this time around remains to be seen, but it doesn't seem like he's written off the idea entirely as he has in years past.