Eagles still looking to sign running back who can add 'value, depth' 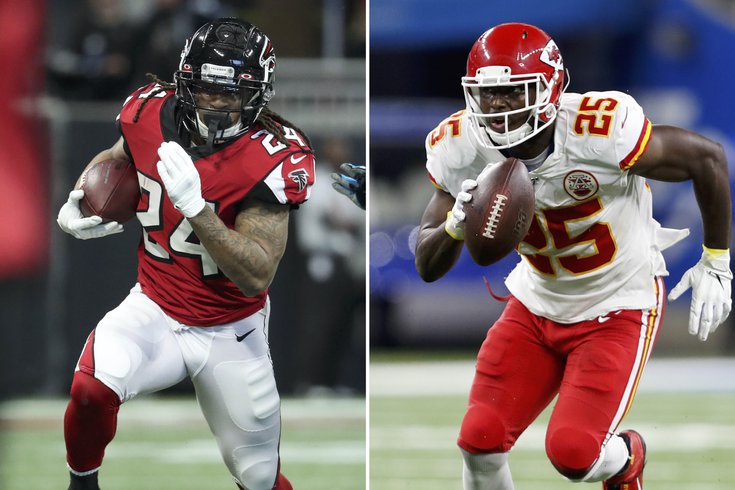 Devonta Freeman and LeSean McCoy remain options for the Eagles.

The Eagles players got a bit of a surprise on Monday when head coach Doug Pederson announced to the team that he was cancelling the remainder of the virtual offseason program, which could've extended another 10 days, because he was happy with all the hard work his players have put in so far.

When the team actual descends on the NovaCare Complex next month for the start of a much different training camp than they're used to, there could be some new faces in the locker room, ones the guys didn't get to spend the past few months getting to know over Zoom chats.

That's because the Eagles still have a few holes to fill — and were handed another on Monday when Pro Bowl guard Brandon Brooks tore his Achilles — on their roster before the season begins. Those position include a backup running back, some depth at defensive end, a linebacker, and now, potentially, a new starting right guard (or at the very least some more depth).

The area that's gotten the most attention has been running back, and for good reason. Typically, the Eagles roll with a running-back-by-committee system, in which two or three backs share the load in order to ease the burden on one another, preserve health, and provide depth should one of the backs go down.

That's a system that has worked out well for the Eagles, but it's also one they may have outgrown if they believe second-year back Miles Sanders is ready to be this offense's workhorse on the ground. But that also comes with a caveat, as the Eagles likely aren't going to want to run their talented young back into the ground in just his second season. They also need to be careful not to give him more work than he can handle.

Currently, the Eagles have a slew of other young running backs behind Sanders, including Boston Scott, Corey Clement, Elijah Holyfield and some undrafted free agents. So it would make sense that the Eagles would be in the market for a veteran presence in the room they can plug in somewhere behind Sanders on the depth chart to not only ease the burden, but also provide valuable depth should Sanders miss any time — the latter of which may be more important than ever given the pandemic-shortened offseason.

And according to Pederson, despite the virtual offseason coming to a close this week, the team will continue in its pursuit of someone to play behind Sanders.

"Right now, obviously, we're going to continue to look and see if we can add value, add depth, add competition to that room," Pederson said on Tuesday.

Some of the remaining options for the Birds include Devonta Freeman, LeSean McCoy, Theo Riddick and others. But each comes with their own set of issues.

For Freeman, it's the price tag. With the Eagles already looking to roll over as much cap space as they can for next year — not to mention that they may need to use some elsewhere yet this summer — they're going to need him to come down considerable from his current asking price. After all, as Adam Caplan reported earlier this offseason, the Birds are looking to bring someone in for close to the veteran minimum.

That brings us to McCoy, a guy the Eagles know quite well, albeit a different version. McCoy is getting up there in age and there are questions about how much he has left in the tank. He's hinted at wanting to return to the Eagles for one last season, but it's worth wondering if a guy who was a healthy scratch for the Chiefs in the Super Bowl is worth brining in the first place. Postseason aside, he was able to contribute in a limited role in 2019, averaging 4.6 yards per carry, and if the Eagles only planned to use him in short bursts, maybe he does make some sense.

Theo Riddick missed nearly all of last season with a knee injury and is still recovering from surgery, which may cause some hesitation on the Eagles part. But at this point in the offseason, beggars can't be choosers, and if the Eagles are set on bringing someone in, even if it's only for some extra competition for the guys near the bottom of the depth chart, it's going to be slim pickings.

Of course, the Eagles could just opt to roll with what they have.

"We are very comfortable and excited about Miles [Sanders], what he did in his rookie season, what he can do now moving forward. He's excited about the upcoming season; he's excited about getting back to training camp," Pederson said. "You know, Boston Scott came on at the end of the year for us and performed well. We do know what Corey [Clement] can do. Corey had a heck of a year in 2017 for us as a rookie and it's unfortunate again [the injuries] but he's put himself in position to come back and help us through injury. And then we have some young guys, some young guys that were excited about looking at.

"You know that the running back position for us has been sort of by-committee, it's been two or three guys each and every week that not only help us in the run game but can also help us on special teams, and that's also a big part of this. So I'm looking forward to, again, getting these young guys in the building, getting them on the grass, and [them] showing us what they can do."

With the start of training camp still over a month away — and that's if everything goes according to plan — the Eagles have time to decide whether or not it makes sense to bring in a veteran running back. But these current free agents aren't going to remain unsigned forever, so they better be careful not to wait too long.