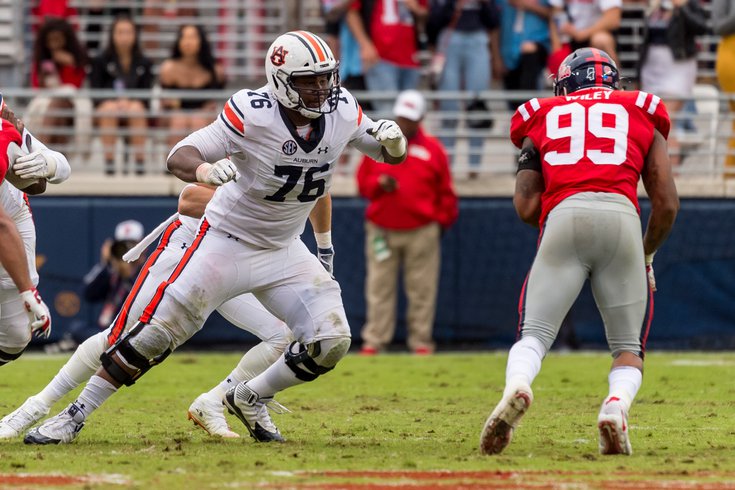 Prince Tega Wanogho has two extra legs and some arms growing out of his back, which will give him advantages in the NFL, but makes it difficult to compare him to other players.

During this dead period of the offseason, we've been comparing each of the Eagles' rookies to current NFL players. Today we'll take a look at sixth-round offensive tackle Prince Tega Wanogho.

The comp we came up with for Wanogho is D.J. Humphries, the Cardinals' current starting left tackle. Wanogho did not compete at the Combine because he had his right knee scoped, and Auburn didn't have a pro day, because of, you know, COVID, so we can't show athletic comparisons, but here's how the two players compare, size-wise:

Humphries came into the NFL with good (but not elite) athleticism:

Wanogho's size has been exaggerated for a half decade. Auburn listed him at 6'8 his first three seasons there, and then at 6'7 for his final two. Perhaps because he is an actual prince who came to America from Nigeria during his high school years, tales of his size and athletic measurables maybe became romanticized a bit?

For example, in an article posted on AL.com in January of 2015, when Wanogho was a highly sought after recruit, high school coach Bobby Carr spoke of him like he was Bill Brasky.

1) Carr said he ran a 4.61 in the 40-yard dash in high top tennis shoes because he didn't have a size-17 football cleat for him. That was on the first day he arrived in American from Nigeria.

Yep, he ran the 40 on his first day in America.

2) He looked fast, but Carr said he wanted a good time on him. So he placed speedy running back Herman McKenzie five yards ahead of him. Wanogho Jr. was stationed at the goal line. McKenzie had been clocked in 4.4 seconds in the 40.

When he blew the whistle, the boys were told to run. He wanted his new project to chase McKenzie. Carr said Wanogho caught McKenzie and grabbed him at the 35.

"That's why I didn't need to worry about a time on him and how fast he was anymore," Carr said. "The kid is an absolute specimen."

3) He is a legitimate 6 feet, 7 and one-half inches and 247 pounds. According to Carr, that's what he will measure with his shoes off.

He wanted a good time on him, so he had another player run in front of him? Huh? Also, as we noted above, Wanogho measured in at 6'5 at the Combine, so unless he shrunk two inches since high school, you can take all of the above with a huge grain of salt, though I do think we can trust that he is athletic, and his tape certainly shows that.

The reality is that Wanogho will have some size disadvantages working against him in the pros, notably his 33 1/2" arms, which aren't exactly T-Rex arms, but they're also not ideal. Humphries has had those same challenges.

Other similarities between Wanogho and Humphries:

• Wanogho and Humphries were both medical risks coming out of college. Wanogho was flagged for a knee injury at the Senior Bowl, while Humphries missed seven games his final two seasons at Florida with knee and ankle injuries.

• Both lacked experience heading into the draft. Wanogho is relatively new to the sport, as he had limited exposure to football in high school (where he played DE), though he did start 32 games at OT at Auburn. Humphries only started 19 games at Florida. Though limited in experience, both players played against high-level competition in the SEC.

• Both players were heavily recruited out of high school, and had to put on weight during their college careers.

• Both have ideal athleticism, and were considered upside players when they entered the NFL.

• Both players are considered to be better pass protectors than run blockers.

Humphries was the better prospect, and he went 24th overall in 2015, which some considered a reach. He has become a decent starting left tackle in the pros. Of course, Wanogho went 210th overall, largely because of the aforementioned medical concerns. To be determined if he can become a steal.