What they're saying about the Eagles: What does future hold for Kelly? 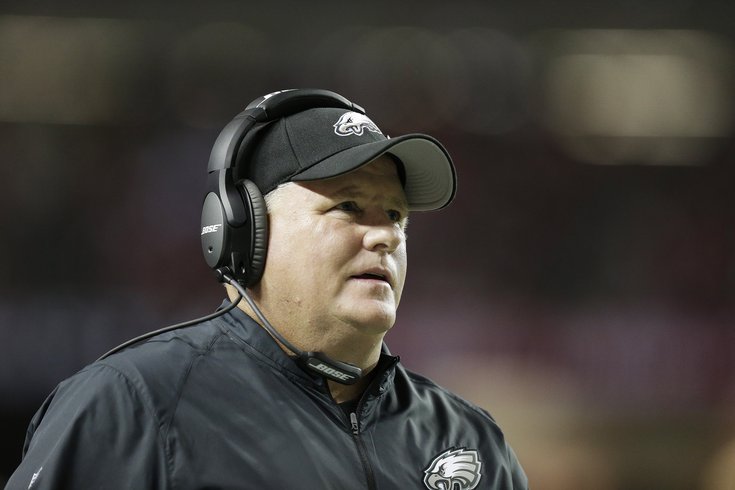 Things are not pretty in the world of Philly sports. But we knew that already.

And based on what we saw out of the Eagles on Thanksgiving Day, things don't look like they're magically going to turn around anytime soon. Even when you look to the other franchises in this city, it doesn't get much better.

I mean, after all, who would have thought that the Phillies -- yes, the 63-99 Phillies that finished with the worst record in baseball -- would have the best winning percentage of any of the four major pro teams this year? Aside from Ruben Amaro, probably no one.

If the Eagles do in fact lose, the Phillies would have the best winning percentage among the Big 4 pro sports teams in Philly in 2015.

Of course, that could change at any day if the Flyers decide to start winning a few games...

In 2015, the Philly team (4 major pro sports) with the best win pct is the Phillies, who had MLB's worst record pic.twitter.com/o2y4X1sBSv

All four of those teams have undergone both coaching and front office changes -- major ones -- since the start of 2013. Believe it or not, but Chip Kelly is the longest tenured coach in the city. And after the outcomes of the last three Eagles games, he's rightfully on the hot seat. And that means so is their GM.

If you asked fans at the start of 2015 which team would have the best winning percentage, most would have likely said the Eagles, who finished 10-6 each of the past two seasons. So perhaps that's what makes this even more of a disaster than Andy Reid's final 4-12 season.

Not only is the city suffering through its worst sports season since 1972, but the national media is starting to catch on to what's happened in this city. I mean, just think of where this city was about five years ago.

The Eagles nearly won the NFC title in 2009. The Flyers went to the Stanley Cup Finals in 2010. The Phillies went to the World Series in 2009, one year after winning it all, and the NLCS in 2010. Even the Sixers took the Celtics to seven games in the Eastern Conference semifinals in 2012.

Here's what Nate Scott of USA TODAY's For The Win blog wrote following the 45-14 drubbing the Lions handed to the Birds:

There are bad situations in other cities, for sure. But Philadelphia deserves better than this. They have proud fans (some of whom may be terrible people) but they’re loyal. These fans care. And they deserve better than what this city is giving them right now.

But judging by what others in the media -- both nationally and locally -- are saying, things may get a little worse before they get better.

Here's what they're saying about the Eagles, specifically about how much Kelly is to blame for the team's struggles, if will be back next season and whether or not that will be his decision to make.

Kelly the coach is not the problem

In truth, it's tough to really judge any head coach without seeing what he can do with a competent quarterback. It's also true that we're -- both fans and league decision-makers alike -- really awful at figuring out whether head coaches are any good. Virtually every current top coach, as I've mentioned in the past, was let go ignominiously by a pro team in the past. The Browns ran Bill Belichick out of town. The Patriots dumped Pete Carroll to bring Belichick in years later. The Bears let Ron Rivera go because he wanted to interview with teams. Heck, the Panthers were about to fire Rivera before 2013. The Steelers forced Bruce Arians into retirement. Even if the Eagles fire Kelly, it wouldn't be proof that he (or his concepts) don't work in the NFL.

As a general manager, though? Kelly's first offseason was so distinct and so disastrous that you could make a credible case that he doesn't deserve a second go. Remember, it's not as though Kelly made a series of universally acclaimed moves that failed to work out. These were acquisitions with warts that were obvious at the time in March. Bradford didn't fit Kelly's scheme. Maxwell was a massive overpay coming from a cornerback's dream home. Murray was a massive case of paying for the outlier. These were all bad ideas before the ink was dry.

Less than 10 months after betting on Daunte Culpepper over Drew Brees as the Miami Dolphins’ quarterback, Nick Saban was gone to the University of Alabama.

If Chip Kelly makes a similar leap (or gets pushed) in the coming months – still a big if, no matter how lifeless the Philadelphia Eagles looked in Thursday’s 45-14 debacle in Detroit – it won’t be tough to trace it back to his own quarterback call.

Kelly now has five weeks to save his job

His players insist they haven't quit on him. I'm not sure what else they would say, but anyone with eyes can see that something is going on inside Chip Kelly's locker room. There are plenty of grievances to be had about the way Kelly has handled his time as general manager, and he's had some suspect coaching decisions throughout the year.

If Kelly has indeed lost the trust of his players, bringing him back would be an impossibility. You simply can't waste another year hoping to "right the ship" if the majority of the locker room (or at least the players who hold sway) have tuned out the head coach. Kelly essentially has five more weeks to prove he deserves to keep his job. And with a road trip to New England looming, it's going to be a big task keeping that locker room intact.

Confused, tormented, forlorn - Chip Kelly looked and sounded like a man who had taken a left turn into hell as he took questions from an assemblage that he no longer regarded with bemused antipathy. If there was nonsense in the room - and there was - it was coming strictly from the podium now as he reached deep into the book of clichés to explain the unfathomable, and the unthinkable.

He needs to put players in better situations. They will look at film and find out what happened. They all need to look in the mirror following the second embarrassingly one-sided loss in less than a week, this one a 45-14 beating from the now 4-7 Detroit Lions.

Kelly must go back to being himself to save Eagles

Looking back at the way Kelly has transformed this team over the past two years, it's clear that instead of being the head coach he was in college, a style that has brought him so much success, Kelly has tried to conform to the NFL.

Gone are the quick, shifty, play-making skill players he had so much success with at Oregon. Gone are the trick plays, the two-point conversions and the guts to go for it on fourth down.

Instead, Kelly, a student of the game and history guru, has tried to build his team like the teams that have traditionally won in the NFL.

Will Kelly be back?

We asked the USA TODAY NFL staff the following question: "Is Chip Kelly done in Philadelphia, either by his choice or the team’s choice?" Their responses:

•  Chris D’Amico — I think it could come down to whether owner Jeffrey Lurie takes away the GM title. …

•  Michael Middlehurst-Schwartz — It's too soon to say Kelly's time in Philadelphia is already wrapped up, but it sure doesn't look good. …

•  Tome Pelissero — Still too soon to say. Chip can leave anytime he wants and there will be a top-flight college job waiting. …

Does Kelly return to Philly next season?

Where will Kelly be coaching in 2016?

Where will Chip Kelly be in 2016? It could be anywhere: NFL, college, new place, old place, relaxing for a year while collecting a pay check “earned” from reputation and expectations rather than NFL performance. But right now, the chance of Chip Kelly returning to Philadelphia is fading as quickly as his team’s playoff hopes. So, if there’s a chance it’s not Philly, then where?

Is it time for Chip Kelly to go?

And now here are some clips that have less to do with Chip Kelly and more to do with what happened Thanksgiving Day in Detroit.

Eagles ripping at seams in all phases

Whenever a team is mired in a free fall like the one in which the Eagles find themselves, it's difficult to find solutions. The defense looks confused, at best, if not lacking confidence or plain old toughness. The offense is overmatched up front and lacks a consistent threat on the perimeter. Special teams have been inconsistent all year. Injuries are beginning to mount as well, stretching a roster that's thin as it is.

Then there's the question of whether Chip Kelly is still the man who can turn it around. With all this losing, there is increasing speculation that the head coach is losing the locker room and could depart at season's end.

For nine games, the Eagles defense didn't allow a team to score more than 27 points, but in a five-day span the unit gave up 90 points. It was only the 12th time in NFL history that a defense allowed 45 or more points in back-to-back games and the first time ever for the Eagles, who had never allowed a quarterback to throw five touchdowns without an interception in franchise history before Jameis Winston and Matthew Stafford did it against them in Weeks 11 and 12.

Overall grade: F — Another game, another blowout at the hands of a bad team. After taking a whooping at the hands of the Tampa Bay Buccaneers, the Eagles had a short week to prepare for the Detroit Lions. And from the beginning it became clear that it was going to be all Lions.

After the Eagles missed a field goal and the teams traded punts, the Lions went on to score on their next six drives. The Eagles, meanwhile, strung together one drive of more than 10 plays during the entire game. It was another embarrassing performance for a team that looks increasingly disinterested.

It is a major problem when a team quits on a coach. It is the kind of thing that costs a coach his job.

But when a team competed and gave effort and got manhandled like the Eagles did twice in one week, that raises other questions. If this was their best, how good can they be?

Eagles players may not want to show their faces