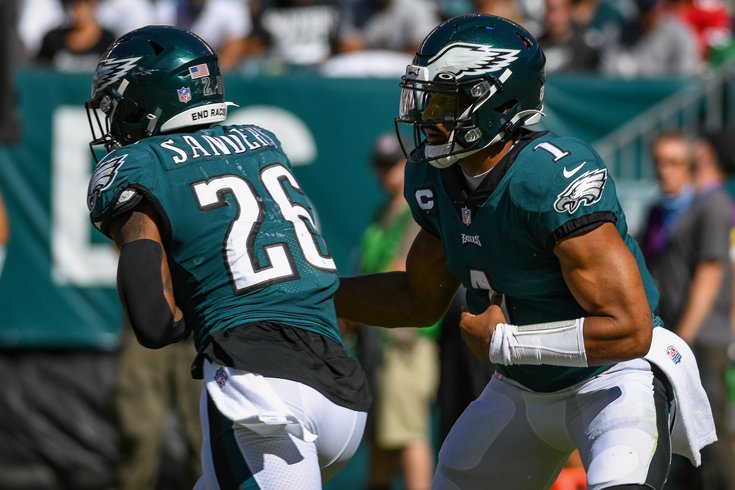 Eagles quarterback Jalen Hurts hands off to running back Miles Sanders during Week 2.

There are positives and negatives to the Eagles playing on Monday Night Football.

On the one hand, you get a nice relaxing Sunday, free of the stress and anxiety that comes with watching the Birds play. On the other hand, you have to wait an additional 30 hours for them to play and god dammit you live for that stomach-twisting madness that is Eagles football and you want it now.

This week, for the only time all season, Birds fans are forced wait that extra day and a half to watch their team play. As Tom Petty said, the wait is the hardest part. And he probably wasn't even considering that it's Dallas Week, which certainly isn't making said wait any easier.

But it's getting close, and I can prove it to you. We already posted our predictions, our matchups to watch, our predictions roundup and even the final injury report. Now, the only things standing between you and Eagles-Cowboys on Monday Night Football is one day of work and these over/unders.

As we do each week, we've rounded up five numbers to watch on Monday night...

That's currently the total at FanDuel and elsewhere, which suggests that in addition to it being a close game — the line for Eagles vs. Cowboys is currently DAL -3.5 — it's likely going to be a high-scoring affair as well. But so far, each of the Eagles first two games have come in well below the projected point total, in large part to some stout play from the Birds' defense — and in the case of the Niners loss, an offense committed to squandering opportunities.

Against Dallas, the Eagles will be facing a less sound (and even more injury plagued) defense than they saw in Week 2, but will also have to deal with a much more dangerous offense. If things follow trend, this could be the high-scoring affair oddsmakers are expecting it to be.

So, who will have more rushing yards for the Eagles? Their starting quarterback or their starting running back? You might think that's a no-brainer, but it was interesting to see the line over at FanDuel putting them within a couple of yards of one another. Hurts' total is at 54.5, while Sanders' is at 58.5. And, honestly, the much safer bet here on the surface appears to be on Hurts leading the way. After all, he's averaging 8.5 yards per carry on 17 carries (72 yards per game) while Sanders is averaging 4.6 yards per carry on 28 carries (64.5 YPG).

The one wrinkle in this one is how the Cowboys might choose to defend Hurts. With stud rookie linebacker Micah Parsons back there, they'll likely have him shadow Hurts quite a bit in an attempt to neutralize the mobile QBs threat as a rusher, or at least to try to keep him from extending drives with his legs. If that's the case, the Eagles could look to use Hurts as a rusher more as a misdirection. All that being said, there's no predicting what Hurts is going to do once a play breaks down, and he's capable of breaking off big chunks of yardage at a time in those situations. And if the Eagles are playing from behind — which we expect to be the case, the rushing attempts for Sanders may be limited, while the late-game scrambling (like we saw against the 49ers) could easily push Hurts ahead in this one. I'll take the underdog (Hurts) in this battle.

That's the real number being offered over at FanDuel, and it seems about right given what he's been able to do over the first two games. More was expected against a beat up 49ers secondary in Week 2, but Smith was unable to come down with a few deep shots that would've drastically changed his final line had he and Hurts been able to link up. Just because he had a down week doesn't mean he's not as good as advertised. He's had 15 targets over two games, and I don't see those numbers going down. Against a beatable Cowboys secondary that has given up the second most passing yards and 10th most passing touchdowns through two games, expect Smith to be heavily involved again. In fact, I could see Sirianni dialing up a couple of quick plays to his rookie receiver early on just to get his feet back under him.

The Eagles haven't been able to force a turnover yet this season, and that's a problem. It was a problem for much of last season, until the unit turned it around over the final month of the season, forcing eight over their final four games. The Cowboys, meanwhile, have turned it over just once in each of their first two games, so it isn't going to be easy for the Birds to get their first one on Monday night. But in a game that's expected to be close and high scoring, that one turnover could be the difference between a win and a loss. So far, Jonathan Gannon hasn't gotten too much heat for this since his defense is also second in the NFL in point allowed and fourth in yards allowed.

Honestly, it's impressive they've been that good without creating any turnovers. But if the losses keep coming — even if they're doing a good job of keeping opposing teams out of the end zone — Gannon is still going to need to answer as to why they're not getting some takeaways. Fortunately for him, I think the first one comes Monday night against Dallas.

Just as surprising as the No. 2 scoring defense not forcing any turnovers is the job that this young Eagles offense has done protecting the ball, and a lot of that can be attributed to second-year QB Jalen Hurts, knowing when to tuck the ball and run — and how to hold onto it when he does, sans two fumbles in the pocket — and when to throw it away vs. force a throw into a tight area. It's part of the reason he's got a 108.0 passer rating through two games despite averages of 227 yards and 1.5 TDs per game (small sample size, I know).

Clearly the Eagles are putting an emphasis on limiting turnovers, not just with Hurts but with the rest of their offensive players as well. Obviously, they're going to come eventually. Against a Dallas defensive front that is totally depleted, Hurts should have some time to throw and can hopefully avoid a costly fumble. But it's Dallas' secondary that is the wild card here. While they've been allowing a ton of yards and TDs, they also have four interceptions in two games, including a pair by cornerback Trevon Diggs, who had three in two games against the Eagles last season. I think Hurts suffers his first turnover of the season on Monday night, which certainly isn't the end of the world — depending on the timing, of course.