The Philadelphia Eagles had a surprise in store on Friday for the South Jersey woman whose emotional exchange over Super Bowl LII with her mother after having her wisdom teeth removed went viral this week.

Haley Parks, a Rutgers University junior who initially thought she missed the Super Bowl while being sedated during the 30-minute procedure, is headed to Minnesota to see her beloved Birds take on the New England Patriots on Sunday.

"Hey, Haley, we've got two tickets waiting for you in Minnesota," the Eagles' Facebook account wrote when it shared the video on Friday. 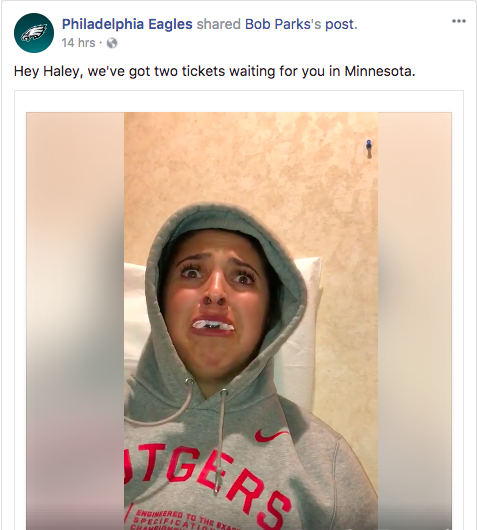 It didn't take long for the video, posted to Facebook by Parks' father on Tuesday night, to go viral. The clip had 3.1 million views and more than 34,000 shares as of Saturday morning.

Park was reached by NBC10 on Friday and said she had been sitting in a restaurant when she saw the Eagles' post. She "literally started screaming" over it, she said.

Parks and her father, Bob Parks, were taking up the Eagles on that offer and were headed to Minneapolis.

The video shows Parks coming out of her anesthesia-induced daze, about as upset as anyone coming off that truly unpleasant procedure.

But her immediate reaction was to ask her mother if she had missed the Super Bowl, and then express her desire to attend the Big Game, her sadness over Carson Wentz' season-ending injury, her faith in "St. Nick" Foles and the Eagles' defense and her deep dislike for "fake" fans who hopped aboard the bandwagon during the Eagles' seemingly improbable Super Bowl run.

The full video can be seen below. Enjoy the game, Haley.