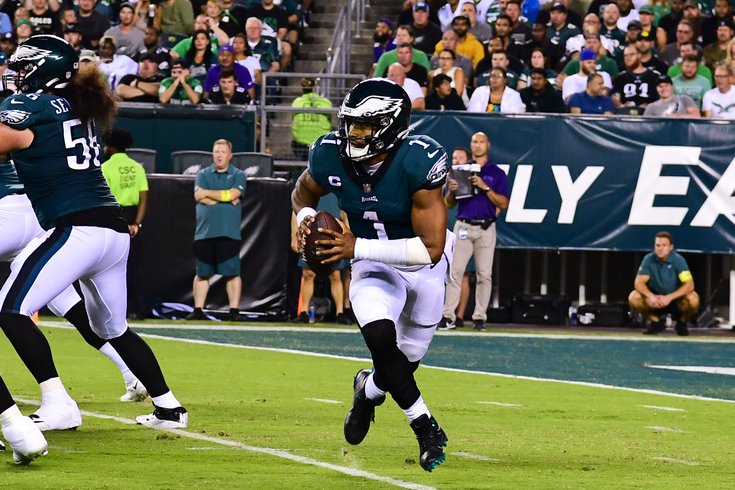 The dictionary defines “ignorance” as lack knowledge or information.

The word has devolved into an insult – that someone would dare profess something without fully understanding it should only result in ridicule. Misinformation is usually born out of ignorance, in it’s rawest and textbook form. Simply not understanding the fundamental aspects of whatever is in question. In this case, it’s the NFL.

What’s starting to develop is this thought process that Jalen Hurts is running the football too much. That’s a bad thing for some people, and the offense needs to change for the Eagles to win the Super Bowl.

This is ignorance in it’s truest and most stripped-down form of ignorance and shouldn’t be met with the typical tone of the playground – or the adult playground of Twitter. A lot of people who feel this way, that the only way you can win in the NFL is by passing the ball, aren’t paying attention, or are only choosing to focus on the smaller aspects of the league.

We had an earlier column that highlighted how teams move away from running against the Chiefs, primarily because it’s in their heads that they need to pass to keep up with Patrick Mahomes. Child, please. Nobody is going to beat that man in a shootout. But you can beat him. That’s not up for debate.

Contrary to what the DFS and sports talk world have pushed for decades now, what the NFL has tried to push with significant rule changes dating back to 2008, and what losing bettors continue to profess – this is NOT a passing league.

It’s a “do whatever the hell you have to do to beat the best team” league. It’s a running league. It’s a combo league. It’s a league that requires you to run and think outside the box as much as you need to just have a QB drop back and throw.

Oh, by the way, Jalen Hurts can make those throws.

That comes in a minute, but first let’s examine what’s happened with the public narrative over the past 15 years. Ever since the NFL pushed for significant rule changes in 2008 to help open the offenses, there has been an uptick in scoring. Certain penalties are easier to control than others, certain penalties are also a little more subtle to not call as far as others.

Holding calls are incredibly easy to see whenever a QB is dropping back and standing in the pocket. It’s as close to time slowing down as you’ll get on the field. The holding calls on run plays are not only much more difficult to see with the naked eye, but also easier for the refs to let go. This in turn opens up some scoring by allowing bigger run plays, chunk plays, turning into scoring drives. Any team that is dedicated to running the football will benefit from less holds being called on the ground.

Go ahead and check for yourself. You’ll see running increase from volume, to yardage, to chunk plays. Fewer plays are called back on the ground, at least on the surface as it’s a sneaky way for the NFL to increase scoring while throwing flags on EVERY play.

Much like we saw teams just desperately heave the ball in the air with the chances of getting a flag, the teams who run heavy are going to see less flags – and bigger gains.

Ok, so what the hell does that have to do with Hurts and the Eagles?

Hurts is the key to this run game. He’s the key to everything, really, but the run game first and foremost. From the obvious threat to run in any RPO to scrambling to designed draws – he’s what keeps defenses shook. His ability to stop and pop with the football makes him exponentially more dangerous. Teams have no choice but to respect this or they die trying. We’ve seen it ten times already.

Miles Sanders and the rest of the ground game just aren’t getting these gains without a threat like Hurts on the field. It’s not that Sanders isn’t a monster talent – he is and deserves to be paid – but this particular offense is incredibly deadly with the dual-threat of Hurts.

This team isn’t running the football because Hurts can’t throw the ball. The Philadelphia Eagles have created one of the most difficult offenses to stop in recent years and the sole reason is Hurts ability to run. It’s not what defines him, nor his skill set, but it’s the most X-factor of his repertoire. They are running sharp plays that spread defenses on the first two downs, with an expectation that Hurts can make an NFL throw on 3rd and 7.

This is a running league, but you still have to pass it.

See? It’s never truly one thing, but if you can do one thing exceptionally well, you have a shot. The Eagles have that because so much of how Hurts can kill a team is when things break down. Every defense has a plan to slow him down, but after the first 1.8 seconds – when it’s clear their plan is failing – what then?

Most guys don’t have the reaction time or speed to change up what they are doing to account for Hurts – anyone who has seen it up close can agree. Teams are just lost for the most part when things break down but unlike a Justin Fields or other younger QB still trying to get his feet set, Hurts doesn’t need to tuck it.

Neither does the offense. They just have the luxury to throw to some pretty damn good receivers. Teams need those. Despite the WRs getting the most press outside of the QB and getting big time money, we see so many other elements truly impact a team winning the Super Bowl. But you still need those guys.

That’s the beauty of this team – they are a machine that’s designed to pummel you on the ground but at any given moment can switch up mid-fight and go southpaw.

Ok, by now you have probably caught on that there’s one key element of the conversation missing in this, his health. The know-it-alls of the NFL want you to believe that Hurts is simply at greater risk of injury if he is running the football as opposed to throwing it.

Some of the worst hits to quarterbacks have come when they are most vulnerable, not preparing to slide to avoid contact – rather forcing a pass and taking on a massive hit. Hurts actually puts his body at more risk throwing the ball at a higher clip than he does running and sliding towards the end. He’s a smart runner who knows when to go down and how to take a hit. It’s just virtually impossible to account for all of your surroundings when you are standing still trying to complete a pass. At least compared to running and controlling your own movement.

The Birds have plenty of guys to throw downfield but even that opens from the run game, which starts with their QB. Both Lamar Jackson and Josh Allen have significantly improved their ability to throw the football since entering the NFL – so has Hurts.

The worst thing any team can do is look at a mobile quarterback, see the level of success they had with him, and try to change him in the offseason to a pocket passer. We have seen this happen countless times in the past from our own Donovan McNabb to Mitchell Tribusky. Teams can’t help themselves. They make bad decisions which is why there’s a lot of turnover in the league each year. That’s why Nick Sirianni and Howie Roseman get so much props for nailing this thing.

Failure coaches and general managers think they can turn Mitchell Tribusky into Patrick Mahomes by sitting him in the pocket, as opposed to building a team around that QB and game planning around the Chiefs. These guys here in Philadelphia built an entire offense around a guy who is expected to keep running while asking him to make big boy throws.