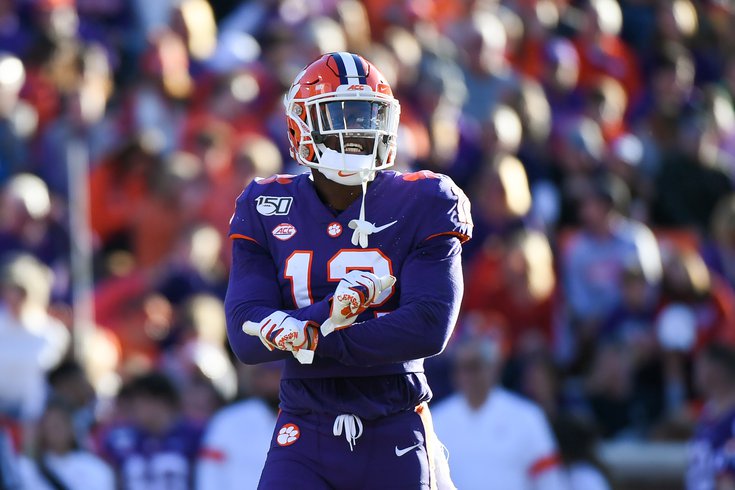 The Philadelphia Eagles drafted Clemson Tigers safety K'Von Wallace in the fourth round.

Finally, the Eagles have made a pick that didn't anger most of the fanbase. With their first selection of the fourth round, Philadelphia went out and got Clemson safety K'Von Wallace, who will have the unenviable task of helping to replace Malcolm Jenkins and live up to the legacy of another former Clemson safety, Hall of Famer Brian Dawkins,

But let's not get too far ahead of ourselves with those sort of comparisons, as Wallace's positional fit and role in the NFL is up for some debate. The Virginia native was part of one of the premier college football programs over the last four years. What exactly did he bring to the table, and how does it apply to the NFL?

Any story about Wallace starts with his mental makeup. Buried on junior varsity early in his high school career, Wallace nearly quit football before resolving to improve at any cost. A self-starter, Wallace edited and posted his own highlight tape on Twitter as a senior, which eventually earned him attention and offers from Ohio State and Clemson.

That mentality shows up when he's on the field. Wallace has earned rave reviews for his competitive fire, unafraid to take on bigger players and always in search of a big hit if he can find the angle. Zone coverage was his point of strength on the back end in college, where he showed good instincts and flashed decent ball skills.

Clemson teammate Isaiah Simmons earned rave reviews for his athletic ability and positional ambiguity, and Wallace offered a lesser version of that package. Down in the box, Wallace had a lot of success getting downhill and blowing up run plays or rushing the quarterback. With Jenkins moving on, the Eagles are in need of a guy who can play and thrive near the line, and Wallace can be counted on for that.

While "jack-of-all-trades, master of none" can sometimes be the mark of a player who isn't good enough at any one thing to warrant playing time, a guy like Wallace who can move around the defense gives you the ability to disguise packages. He doesn't have elite top-end speed, but Wallace is fast/quick enough to be able to take on some slot coverage assignments for Philadelphia, and should be expected to contribute in a nickel role at the very least.

In addition to his defensive contributions, Wallace should be able to step in and help on special teams right away.

If Wallace was bigger, using him as a versatile chess piece would be a lot more realistic.  But he's just 5'11" and 206 pounds without a wingspan to overcompensate for that. He's tough but not overwhelmingly strong, which calls into question his ability to play pseudo-linebacker at times and necessitates a closer look at his coverage skills.

Those physical limitations hurt him on the back-end, too, as receivers can go up and beat him on jump balls and deep throws. On a team that has struggled to prevent big plays in recent years — and with corner still a question mark save for Darius Slay — Wallace doesn't profile as a guy who is going to solve all of their problems there.

Tackling can also be an issue for Wallace when he's on the back-end vs. playing up in the box and getting downhill. That's a problem at a position where you're often the last line of defense, and he plays a lot less sure of himself in situations that demand instinctive decisionmaking.

Is he a man without a position to call his own? That's the question Wallace will have to answer in Philadelphia, and it's one you'd typically like to have figured out before a player makes the leap to the pros.

The scouting community-at-large is fairly unified on Wallace. They like him as a player in specific roles, but there are concerns about how large of a role you can ask him to play at the next level.

Here's what Lance Zierlein of NFL.com had to say about him:

While he played some safety and a lot of big nickel in 2019, his biggest impact came when cutting it loose as a downhill blitzer, disrupting the run and smashing quarterbacks. Wallace plays with exceptional grit and tenacity. He unloads with everything he's got on hit after hit. His hips may be too tight to hold up in man coverage and he lacks range as a high safety. He's a potential backup safety capable of playing near the line and helping on special teams. [NFL.com]

Here's what Matt Miller of Bleacher Report had to say about Wallace:

Wallace is a good nickel defender and has some value as a blitzer, but he's truly stuck without a position. It will take a creative defensive coordinator to get him on the field regularly. His most likely fit in the league is on special teams and playing as a dime linebacker where he can blitz, cover and stop the run. [Bleacher Report]

Not to belabor the point that keeps being made, but this is another area where you can feel the impact of the Jalen Hurts pick on the rest of the draft. If the Eagles had picked up potential starters with each of their first few picks, bringing in a solid depth player who can contribute on special teams would be a nice pick-up in the middle rounds. Perhaps Wallace even outplays that expectation, as he has proven capable of exceeding expectations already in his football career.

But if improved depth is all the Eagles get out of this draft, they are going to risk falling behind the pack in the NFC, with a deep class helping teams around the league strengthen the top of their rosters. Philadelphia had top-end talent that was either too old, too hurt, or simply not good enough last season, and it's unclear whether they will be able to address that problem this offseason.