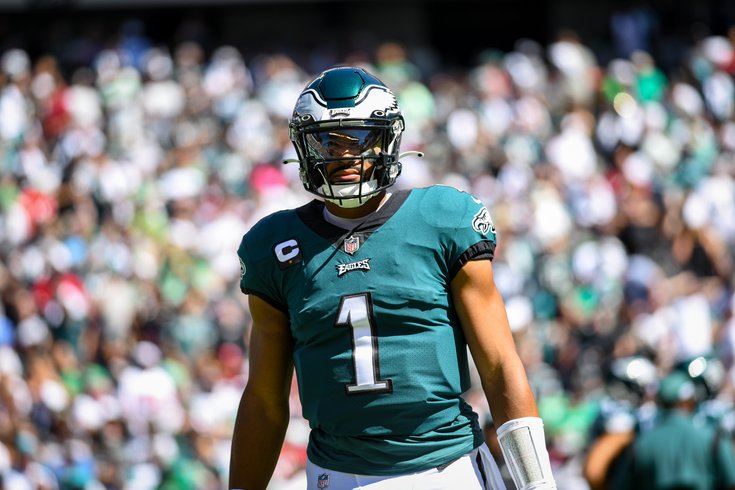 Following back-to-back losses, the 2-5 Eagles will head into Detroit on Sunday looking to avoid losing their third straight game and in the process handing the Lions, the NFL's only remaining winless team, their first victory of the season.

Based on the the predictions, both from our own staff and from others locally and nationally, it's shaping up to be a close game, certainly much closer than Eagles fans would like. And the further you get from Philadelphia, the more likely you are to find people picking the underdog Lions.

That's because the Eagles haven't inspired a lot of confidence recently — there's a reason this is the first time all season they're entering a game as the favorite — and even though the Lions are 0-7 on the year, they've lost a few close games to good teams. After a week of fertilizing, are the Eagles ready to burst through and show their true colors? Or will they wilt under the pressure in Detroit?

We've already taken a look at some matchups to watch, broken down the injuries on both sides and offered up our own predictions — as well as rounded up some others' picks — ahead of Sunday's Eagles vs. Lions matchup. Now, as we do each week, let's run through some numbers to keep an eye on in the form of our five over/unders...

That's the current total at several sports books, but we think it might be a little high. Sure, both the Eagles and Lions are near the bottom of the league in points allowed (24th and 25th, respectively), but their offenses aren't much to write home about either. The Eagles are 18th in the NFL in points scored, but that's misleading since they've scored a ton of points in garbage time late in games that were already all but over. In four of their seven games this year, they would've hit this over. But those four games also came against their toughest competition and were their most lopsided defeats. In the other three games, which came against the Falcons, 49ers and Panthers (who are a combined 8-11) and includes the Eagles only two wins, the total averaged just 35 points.

Going up against a Lions team that is 28th in the NFL in scoring and hasn't scored more than 19 points since Week 1, there's every reason to believe that this game is going to be one in which the Eagles will be within striking distance throughout, if not ahead. And as we've seen all season, those have typically been the lower scoring games for Philly.

That may seem high, but that's right around the average for opposing QBs on the season, which is 74.4 percent, a number so high it doesn't really seem possible. But it is, because the Eagles have allowed four of the last five quarterbacks they've faced to complete 80 percent of their passes, included 91.1 percent by Derek Carr in last week's loss to the Raiders. They can't let it happen again against Goff and the Lions, right?

Not so fast. As Jimmy Kempski pointed out in his five matchups to watch, Detroit's lack of big-play weapons leaves Goff dinking and dunking quite a bit, which is why he has a respectable completion percentage of 66.1, among the highest of his career. Against a soft Eagles defense, that could be trouble. Here's more from Kempski:

Goff and the Lions do not have big play weapons in their offense. Goff is averaging 6.5 yards per pass attempt, and 9.8 yards per completion. Their top two receivers are RB DeAndre Swift and TE T.J. Hockenson, both of whom average under 10 yards per receptions. The receiver with the highest yards per catch average with at least 15 catches is Quintez Cephus, at just 13.6 yards per reception. That guy ran a 4.73 at the 2020 NFL Combine.

If the Eagles play the same soft foofy defense against the Lions that they have played again the majority of their other opponents this season and give Goff easy passes underneath all day, just fire everybody.

The Eagles have been one of the better teams in limiting the deep plays, but the problem is teams haven't needed that to beat them. If they let Goff pick them apart all day, there won't be any more winless teams in the NFL by Sunday evening.

Through seven games, Hurts is averaging just over two touchdowns per game overall, with 10 through the air and five more on the ground. And although he has at least one in each game, he has just two games in which he's reached three touchdowns. The first came back in Week 1 when he had three passing TDs and the second came in the Birds' primetime loss to the Bucs when he threw for one and ran for two more.

Hurts has scored multiple TDs in every game but one (the Eagles' Week 2 loss to the 49ers) and is definitely a threat to get multiple scores again this week, especially with Miles Sanders being out (and the recent Zach Ertz trade) taking away two red zone targets for Hurts.

The Lions are allowing just over two passing touchdowns per game, and although they haven't allowed a rushing touchdown to a QB all season — and have allowed just six total through seven games — we think there's a good chance Hurts ends that streak on Sunday. Nick Sirianni has been asking a ton out of Hurts all season and is allergic running the ball. If the Eagles score three touchdowns on Sunday, there's no reason their QB can't be the guy responsible for all of them.

This is the actual number being offered over at FanDuel, and that actually seems pretty spot on based on the Philly native's average this season (93.3 YPG). Interestingly enough, it's been Swift's impact as a receiver that's actually been greater this year, averaging nearly 56 yards per game on six receptions compared to 37.4 yards per game (on 11.1 attempts, 3.4 YPA).

As we mentioned earlier when discussing Goff's completion percentage, the Lions don't have much of a deep threat on offense, so Swift is heavily involved in their short passing game, something that's given the Eagles problems this year. Add to that some poor tackling where it feels like a guy can fall forward for an extra three yards whenever he wants, and you have a recipe for potential disaster. Jamaal Williams has been the better rusher for the Lions this season, despite getting fewer touches overall, but Swift remains the biggest threat against an Eagles defense that has struggled against the run at times.

Through seven games, Eagles running backs are averaging just 13.7 rushing attempts per game. Some of that, sure, has been due to the fact that they've been playing from behind almost every week. But it's not like they're running the ball with much regularity anyway in the first half of games (or before they get out of hand at least). Now, they'll be without Miles Sanders, who was getting about 75 percent of the running back carries before his ankle injury last week.

Jordan Howard will likely see his first action of the season on Sunday, but there's no telling how Sirianni and Co. will mix in the running backs in Sanders absence. The one thing that seems like a safe bet, however, is that he won't be dramatically increasing their usage. The one exception could be if the Eagles get out to a big lead over Detroit. Unfortunately, they haven't shown us much recently that would suggest they're capable of building a big lead over anyone, even the winless Lions.