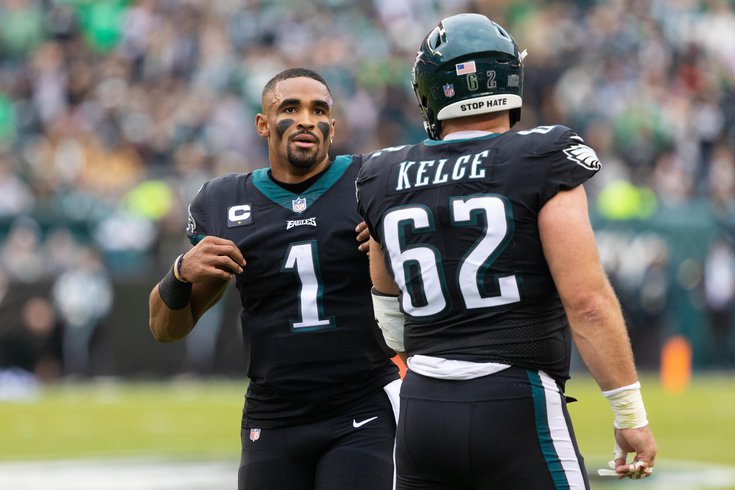 Jalen Hurts and Jason Kelce, who will remain offensive captains for the Eagles in 2022.

The roster is locked in, and now so is the leadership group.

Head coach Nick Sirianni announced the Eagles' 2022 team captains when he met with the media on Thursday.

It's a veteran group – all voted on by teammates, Sirianni said – and a rather unsurprising one for a suddenly much younger roster.

Kelce, Johnson, Graham, and Cox have been fixtures of the Eagles for years. They've been through the highest of highs and the lowest of lows, and, along with Hurts, Slay, and Elliott, have personalities that teammates look to and gravitate toward.

Graham especially of late, as he's set to finally return from a season-ending Achilles tear suffered in Week 2 of last year, staying all smiles throughout his recovery.

Kelce will also be returning to the field after surgery to clean out his elbow caused him to miss the preseason. He's back at practice and should be ready to go Week 1 against the Lions to continue his streak of 122 consecutive starts.

"I've told him this many times, when I'm the head coach here, I want him to be on the football team," Sirianni said of Kelce on Thursday. "There's no secrets in that. I don't know how many kegs I'll have to send next year or the year after that or the year after that, but we'll cross that bridge when we get to it.

"We love having him out on the field, and it just always makes a big difference."

Kelce, Cox, Graham, and Hurts are all retaining their captaincies from last season.

But Slay, entering his third season with the Eagles, Elliott, going into his sixth, and Johnson, coming up on the decade mark, will all be wearing Cs for the first time after safety Rodney McLeod and linebacker Alex Singleton left in the offseason.

"He said he held back tears talking about it the other day," Hurts said of when Slay found out he had been voted a captain. "It means that much to him, and that's a guy I want leading."

To be named a captain is a true blessing for me… never been a vocal or motivational guy. I was always taught to lead by example. An if u kno me I’m a guy that plays an jokes around a lot😂 an for guys to see past all of that I thank ya an I will wear that C on my chest honor!!!

The Eagles submitted their 53-man roster on Tuesday, but still put on some finishing touches when they traded struggling wide receiver Jalen Reagor to the Vikings the day after.

The Eagles' season opener is next Sunday in Detroit. Not much longer of a wait left.