"He did something in this city that I hope to do," Sirianni told WIP Monday morning. "He won a championship." 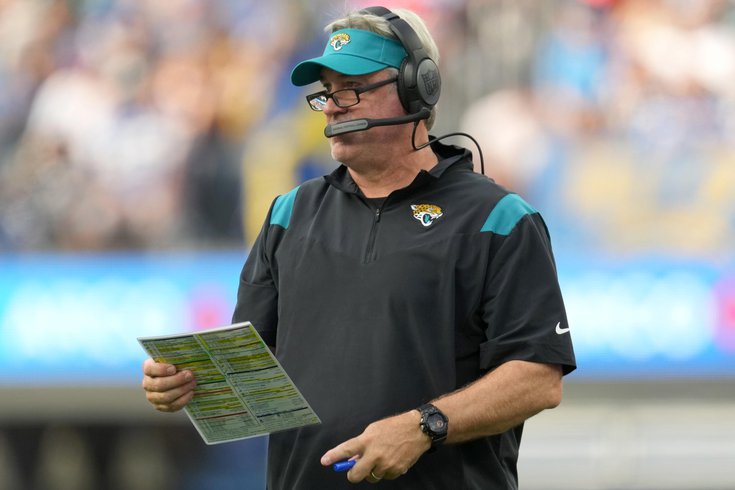 Doug Pederson will make his return to Philadelphia Sunday as the coach for an upstart Jacksonville Jaguars squad.

Frank Reich has a couple of texts coming his way this week, but whether he answers either of them is a different story.

On one side is Nick Sirianni, the Eagles head coach who was the offensive coordinator on Reich's staff in Indianapolis from 2018-2020.

On the other, is Doug Pederson, the Jacksonville Jaguars coach and AFC South rival who had Reich on his staff as the offensive coordinator when the Eagles made their miraculous run to the Super Bowl in 2017.

They'll face each other this Sunday when Jacksonville visits Lincoln Financial Field for a battle between two of the NFL's hottest teams. It will be Pederson's first time coaching back in Philly since his firing in January 2021.

"Well, Frank better answer my text message first since they're in the division together," Sirianni quipped during his media availability on Monday. "I can't tell Frank who to root for or who he needs to like better out of Doug and I.

"I think he's got a good relationship with the both of us, but I know Frank's an ultimate competitor and I'll imagine he'll be rooting for the AFC South team to lose. So we got good mojo on that."

And if there's any animosity left over from the Jaguars' 24-0 drubbing of the Colts two weeks ago, maybe that helps gives the edge to Sirianni too.

In all seriousness, a big week and maybe the toughest matchup so far lies ahead for the Eagles.

After thrashing Washington 24-8 last Sunday – with Jalen Hurts throwing like an MVP, DeVonta Smith catching everything, and the defensive front punishing Carson Wentz all game – the team will be returning home to an electric Philly crowd looking for a 4-0 start, but also a moment to celebrate the coach that helped the city reach its first Super Bowl title.

"I have a ton of respect for him," Sirianni said of Pederson. "I don't know him personally, I've talked to him a couple of times, but I only know him through, obviously the people in this building, and then through Frank.

"I've heard nothing but phenomenal things. I think he's a great football coach, obviously, he brought this city a world championship and so so much respect for him."

Sirianni, in his second season as Eagles head coach after succeeding Pederson, was echoing similar sentiments from earlier in the day when he called into the WIP Morning Show, again acknowledging that Pederson "did something in this city that I hope to do. He won a championship."

But in both interviews, Sirianni quickly shifted focus back to the task at hand against an upstart Jacksonville squad.

"You can just tell that they're well coached and it doesn't surprise me at all because I know how good of a coach Coach Pederson is," Sirianni said. "So we're gonna be working like crazy to put our guys in good position and I know he'll be doing the same there."

The Eagles are 3-0 and atop the NFC East after Sunday's rout of Washington. They look like one of the most complete teams in the NFL right now, and everyone is starting to take notice.

But the Jaguars are garnering attention too. After losing Week 1 to Washington, Jacksonville bounced back with the shutout of Indy and then a 38-10 blowout of the Chargers on Sunday out in LA.

The defense has been locking their opponents down and second-year quarterback Trevor Lawrence looks like he's beginning to tap into the potential he carried out of Clemson.

The Jaguars, under Pederson, just look miles better than the Urban Meyer-led disaster they were last year and are maybe even ahead of where many originally expected them to be. Pederson even matched Meyer's two-win total in 2021 just three weeks into the new season, and Sirianni said Monday that is a testament both to the coach and his staff.

"I have a lot of respect for Coach Pederson as a football coach," Sirianni said. "I know a lot of the guys over there on that staff as well that I think are really phenomenal coaches with [passing game coordinator Jim Bob Cooter], with [QB coach Mike McCoy], with [offensive coordinator Press Taylor], they got some good coaches over there, and I think their defense is doing a nice job as well and I've heard nothing but good things about [defensive coordinator Mike Caldwell] over there too."

Still, the Eagles have a job to do: To stay at the top of the NFC East and continue proving that they're one of the league's best. The Jaguars will be the next test of that.