Nick Sirianni on OBJ rumor: 'Happy with the room we have'

The Eagles head coach shot down the rumor of his team's involvement in former star WR Odell Beckham Jr. 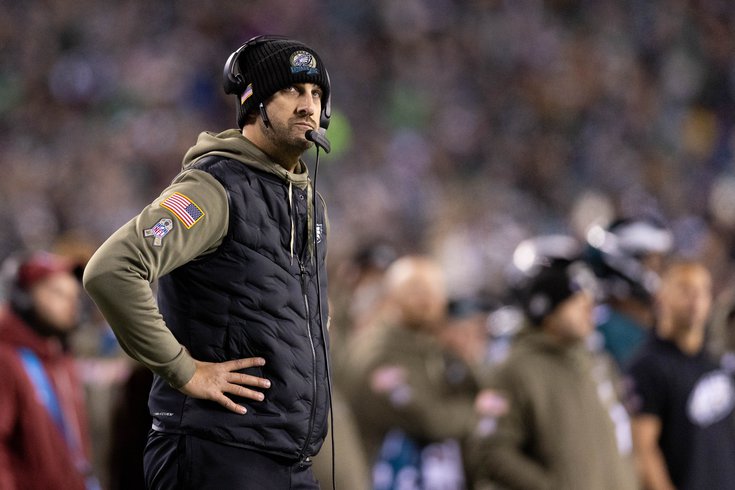 Eagles head coach Nick Sirianni on the sideline during the Week 10 loss to the Commanders back on November 14.

But when a rumor from ProFootballTalk hit Twitter Wednesday morning that threw the Eagles into the mix for the former star receiver, someone was bound to check in with him about it during his media availability later that day.

The Eagles head coach did take the question acknowledging the rumor, but used his response as an opportunity to prop up his current receiving corps instead.

"Everybody knows what [A.J. Brown] and [DeVonta Smith] are doing, right? And then you have [Quez Watkins], who is continuing to come on and continuing to make plays and continuing to be that big speed receiver that we need. Then you have Zach Pascal, who is very critical to a team, the type of play he brings and, you know, your fourth has to be a special teams contributor, which Zach is. He's gotta be willing to do the dirty work and be able to back up every single position, which he does, have a specialty role which he does too. Then your fifth guy better play special teams and our fifth guy (Britain Covey) is our returner, who had his best game as a professional last week.

"So, yeah, I'm really excited about that room, and I'll leave it at that."

Deflecting? A good old-fashioned stonewalling? Maybe, but in all honestly, highly unlikely.

"So you're not signing him?" A reporter followed up.

Sirianni laughed a bit then moved on to the next question.

Beckham has been on a free agency tour of late that has included visits with the Giants and Bills, but now only seems down to talks with the Cowboys... or it was.

See, Beckham is still recovering from an ACL tear suffered during the Rams' Super Bowl win last season, and it hasn't been clear if he is healthy enough to play again.

The NFL Network's Jane Slater came in with a report Wednesday afternoon that Dallas has made no contract offer to him with serious concerns that he isn't.

I’m told there was no offer to OBJ made per a source informed. Serious concerns about ability to play this season. In the absence of seeing him run routes, seeing him cut…they are forced to evaluate the information they have. Doesn’t seem as optimistic as it was pre visit.

In theory, any team signing Beckham would be getting a good but no longer superstar wideout like the Rams did for their stretch run last season.

But the reality is a front office would be rolling the dice on a 30-year-old receiver who has lost a step and is coming off of his second ACL tear on top of that, with no idea of whether he actually is fully recovered. The odds aren't good.

The idea of signing him makes even less sense for the Eagles, who are already loaded at receiver as is. There really wouldn't be any room for him.