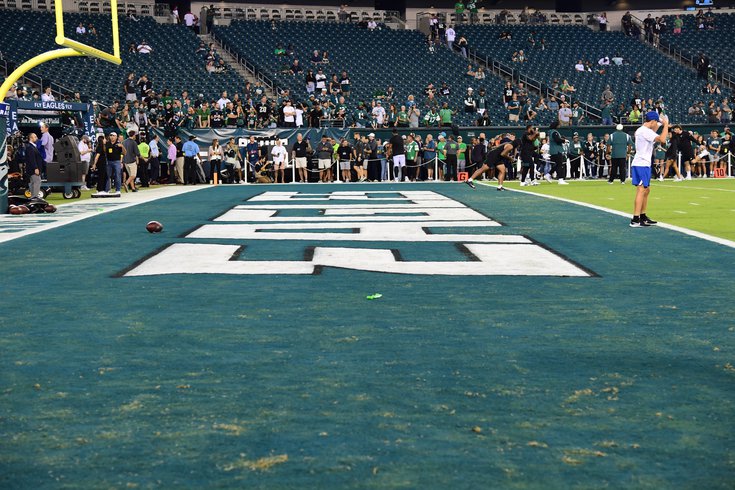 The end zone at Lincoln Financial Field, painted with the new Eagles wordmark ahead of their game against the Minnesota Vikings on September 19, 2022.

Lincoln Financial Field is all set to go for Monday night's home opener, with the field now bearing the new Eagles wordmark in each end zone.

A look at the field was shown late Sunday night on the NBC10 news broadcast and captured by Bleeding Green Nation's Brandon Lee Gowton.

Eagles have their new wordmark in the end zones for their home opener. (Via @NBCPhiladelphia) pic.twitter.com/PzHqETMOZM

The new minimalist wordmark was introduced back in June and designated as a secondary logo for the team to be used in "all forms of media and public-facing materials," which now extends to the Linc's grass.

The Eagles also added a black alternate helmet into their uniform rotation for this season, now that the NFL's infamous one-helmet rule has been done away with, and have plans in place to bring back the early '90s Kelly green look as a throwback in 2023.

It all points to a bit of a brand refresh for the team, which under Jeffrey Lurie's ownership, hasn't really messed with the formula all that much in the past two decades.

The new Eagles wordmark wasn't met with much of a warm reception from fans upon its reveal (it is, admittedly, pretty bland), but has had an increasingly regular presence in the months since, appearing on merchandise, promotional materials, within "Madden NFL 23," and now on the field. Quarterback Jalen Hurts has also been wearing a hat embroidered with the wordmark to press conferences pretty often.

For now, the old, pointed wordmark remains on the Eagles' uniforms but don't be surprised if that changes in the near future. With the reintroduction of Kelly green on the way, the home and road sets could see some touch-ups next season too.