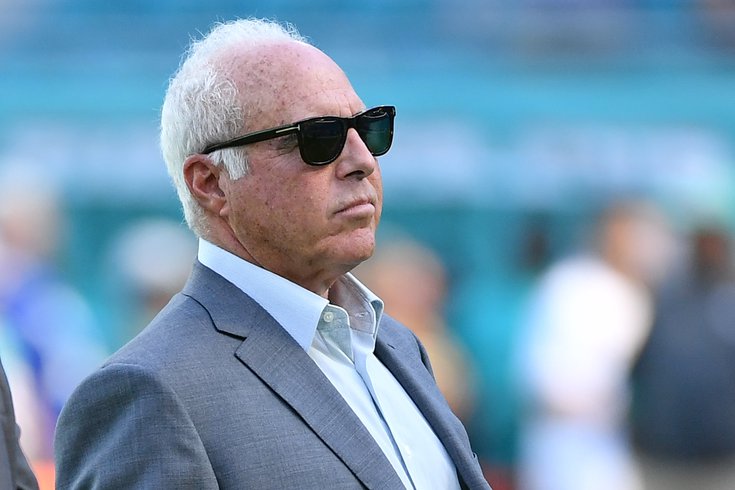 Philadelphia Eagles owner Jeffrey Lurie's new documentary production company, Play/Action Pictures, has announced the subject and title of its first film, and the timing is really something else.

According to multiple reports, the documentary will be called The Meaning of Hitler and the announcement comes just days after Eagles wide receiver DeSean Jackson came under fire for posting anti-semitic, falsely-attributed Hitler quotes on his Instagram page.

Jackson has since apologized, and the Eagles have released a statement regarding the post, but as others speak out against (and in some cases in support of) Jackson, it doesn't seem like this story is going away any time soon. Even Jackson's Eagles teammates Marquise Goodwin and Malik Jackson have been pulled into this mess, proving that DeSean isn't the only player on the team who could use an education in Jewish history.

There hasn't yet been a release date announced for the documentary, but given its subject matter, perhaps getting Jackson a screener as soon as possible wouldn't be the worst idea. Here's more on what the doc will include from the official press release.

Using the eponymous 1978 bestselling book as its frame, THE MEANING OF HITLER is a provocative interrogation of our culture’s fascination with Hitler and Nazism set against the backdrop of the current rise of white supremacy, the normalization of antisemitism, and the weaponization of history itself. Filmed in nine countries over three years, the film traces Hitler’s movements, his rise to power and the scenes of his crimes as historians and writers, including Deborah Lipstadt, Martin Amis, Sir Richard Evans, Saul Friedlander, Yehuda Bauer, and famed Nazi hunters Beate and Serge Klarsfeld, weigh in on the lasting impact of his virulent ideology. As fears of authoritarianism and fascism now abound, the film explores the myths and misconceptions of our understanding of the past, and the difficult process of coming to terms with it at a time in our history when it seems more urgent than ever.

“We couldn't be prouder that THE MEANING OF HITLER is the first completed film made by our new documentary production company, Play/Action Pictures,” said Jeffrey Lurie. “I envisioned Play/Action to be a leading creative force for films that engage with the most crucial and challenging issues of our time. The rise of white supremacy and neo-fascism in the United States and the world over are among the most important and serious threats we face today."

THE MEANING OF HITLER is executive produced by Lurie and Marie Therese Guirgis, Head of Documentary at Play/Action Pictures, and produced by Dana O’Keefe (Barry, 11/8/16) and Mike Lerner (The Great Hack, Pussy Riot - A Punk Prayer)

In addition to this project, Play/Action Pictures is also working on a documentary titled Black Woodstock, which will be directed by Ahmir “Questlove” Thompson of The Roots, as well as a pair of others.