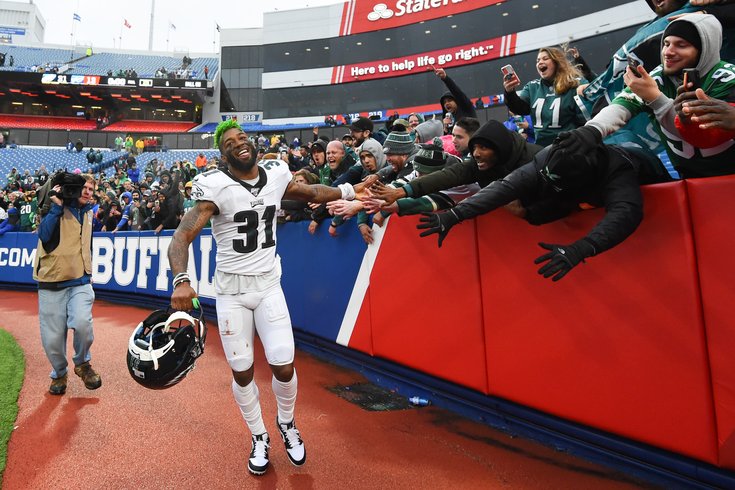 For one windy afternoon in Orchard Park, the Eagles' corners were happy.

Here's where people around the country have the Birds ranked after the eighth week of the 2019 regular season:

Player who needs to step up: Fletcher Cox, DT

Cox is finally starting to round into form after offseason foot surgery. He has 2.5 sacks this season, all coming in his past two games. The Eagles have had issues on all three levels of their defense, but many of those issues would lessen if Cox can reemerge as a line-busting game-wrecker.

#JimmySays: Cox has indeed been much better, and Bears RG Kyle Long is on IR, so he'll have a favorable matchup this week.

That was a potential season-saving performance in Orchard Park. Rookie running back Miles Sanders made the play of the game, a 65-yard burst to the end zone early in the third quarter that put the Eagles in control. That's why Philly used a second-round pick on the former Penn State star. The Eagles ran for 218 yards against a normally stout Bills defense, the highest rushing total in the Doug Pederson era. Speaking of Pederson, this performance reflects very well on the coach coming off a week of a drama surrounding his team. With chatter everywhere, the Eagles showed up to Buffalo focused and took out their frustrations on a Bills team that entered the game with just one loss. Now the biggest question: Can the Eagles sustain this momentum? Up next are the Bears, who are about as desperate now as the Eagles were entering Sunday.

#JimmySays: That's a good point on Pederson. There were a lot of off-field distractions during the week leading up to Sunday, and he had his team focused and ready to play.

Credit where it’s due–the Eagles went into upstate New York and hung 31 points on a solid defense while their own leaky unit only surrendered 13 points. The Birds should be licking their chops with a reeling Bears team in town this weekend.

#JimmySays: I liked the Eagles-Bears matchup in the playoffs last year, and I think I like it Sunday as well.

That was a season-saving victory against the Bills. The running game has keyed two big road victories against the Packers and Buffalo.

#JimmySays: As we mentioned in the NFC Hierarchy/Obituary this morning, the run game keying victories is not sustainable without a good defense, and the Eagles badly need to acquire a receiver Tuesday. On a side note, while the Eagles are clearly a flawed football team, CBS has the Raiders ahead of them, lol.

This is how the NFL goes: You can look horrible and finished one week, then get one big road win and the entire picture changes. The Eagles had a pretty good road win over a Bills team that had only lost to the Patriots this season. The Cowboys have a tough remaining schedule. As cooked as the Eagles looked after that horrible loss at Dallas, they’re right back in the race.

#JimmySays: The same could be said of the Eagles' big win in Green Bay after two straight losses to the Falcons and Lions. Can they maintain the momentum?

Haven't had a 100-yard rusher in two years, a 35-game stretch that's league's longest. Yet Philly run game much better than its air attack.

#JimmySays: That's sort of a weird stat to focus on. On Sunday, the Eagles could have easily gotten Jordan Howard to 100 yards, but chose to rest him with a three-score lead. I mean, they ran for 218 yards, lol. Who cares how it's divided?

The Eagles dug deep to find their defense and running game just when they needed it in windy Buffalo with Carson Wentz facing a tough Bills pass defense. They're still facing an uphill battle in a top-heavy NFC, but now they get three home games and a bye over the next month.

#JimmySays: The Eagles' path to the playoffs is straightforward — Have more wins than the Cowboys. The rest of the NFC doesn't matter much at the moment.

The win at Buffalo was decisive and impressive after all the talk about locker room issues. But the Eagles need to show that they can play like that more often.

#JimmySays: I believe the conditions were favorable to the Eagles Week 8, in that wide receivers and cornerbacks (two bigtime problem areas) became less important in the windy conditions.