What they're saying: Jonathan Gannon the 'front-runner' for Texans job. Should he be? How would Eagles replace him?

The Birds' young defense coordinator has emerged as one of the hottest head coaching candidates on the market after just one year on the job. 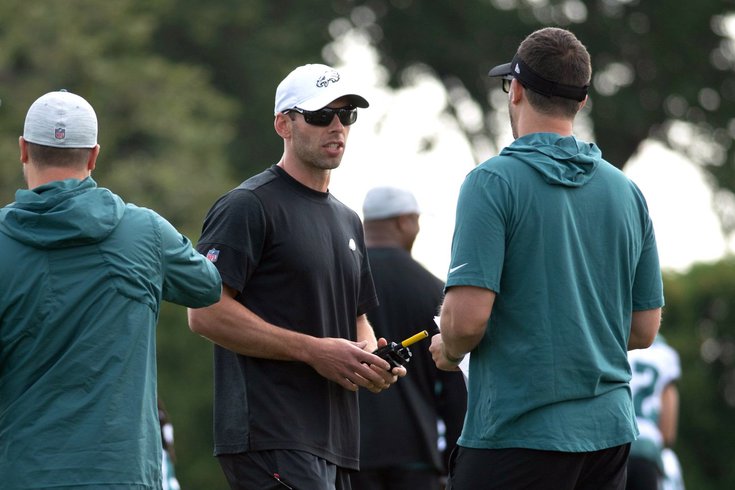 Defensive coordinator Jonathan Gannon could be one-and-done with the Eagles — but not for the reason many thought midway through the season.

Following a rough start to the season in which the Eagles were 2-5 and opposing quarterbacks looked like they could do literally whatever they wanted against his defense, there were more than a few calling for the DC's job. But first-year coach Nick Sirianni stuck by him, and as the Eagles schedule softened, Gannon's defense improved, the Birds started winning games, and ultimately, the team earned an unexpected playoff berth. Of course, once they arrived, Gannon's unit was carved up by Tom Brady in a performance that was reminiscent of everything that went wrong with the Eagles during the first half of the season.

Still, despite all of that, Gannon has emerged as one of the hottest head coaching candidates on the market, already earning interviews with three teams — the Broncos, Vikings and Texans, with the last one emerging as a real possibility for him.

'The current front-runner' in Houston

Over at ESPN, Jeremy Fowler and Dan Graziano answered a slew of questions about the current crop of head coaching vacancies around the NFL, and in the process revealed that some consider Gannon to be "the front-runner" for the Texans job.

Who is this year's Brandon Staley?

Graziano: One of the hottest names out there is that of Eagles defensive coordinator Jonathan Gannon, who I'm told made a very strong impression in his interview with the Texans and is considered by some in that building to be the current front-runner for the job. A head-coach job in this cycle would represent a rapid rise for Gannon, who was the Colts' defensive backs coach two years ago and is coming off his first season as a coordinator.

But those who have worked with him laud his ability to connect with various types of people, build up the confidence of the players and coaches around him and maintain strong relationships. Judging a coordinator based on the way the team performed on his side of the ball is easy, but the characteristics that make a strong head coach don't always align with those that define a coach's specific defensive or offensive schemes. The 39-year-old Gannon is impressing people in ways that make teams look at him as a strong overall leader.  [espn.com]

Of course, those people "in the building" that consider Gannon a front-runner could be the custodial staff for all we know, while ownership might prefer someone else entirely.

Furthermore, that second paragraph is pretty telling. It's the kind of thing that needs to be included if you want to explain away the team's interest despite his defense's below average performance in 2021. Here's a look at their rankings across the board, courtesy of Jimmy Kempski's Stay or Go on Gannon, which you can check out here.

That's not great, and might explain why Graziano's reporting made sure to include that second paragraph. And while all that might be true, I feel like the candidate should at least be good at his former job, even if he has all the personality and charisma in the world. And for Gannon, after a less-than-stellar 2021, the jury is very much still out on that.

Of course, then there's also this report from Mike Florio of Pro Football Talk, which suggests that Gannon isn't really the one the Texans want after all, and instead they would prefer to hire Josh McCown, who has zero coaching experience at the NFL or college level. But first, they need some help legitimizing him as a candidate.

The Texans, who really want to hire Josh McCown as the team's next head coach, hope another team with a vacancy will interview him, in order to help legitimize the move they'd like to make. https://t.co/9Zi3ggDEqU

They can try to legitimize him all they want — and McCown may wind up being a great coach one day — but to give him a shot before someone like, say Eric Bieniemy or any number of qualified black candidates out there would be a terrible look, especially since they just fired a black head coach in David Culley after one season in which he was more or less set up to fail. Do better.

Between that and the Deshaun Watson stuff, this organization is looking more and more like a dumpster fire every day.

Speaking of Gannon's on-field performance in 2021, let's take a look at how NJ.com's Chris Franklin grades the job he did in his first season running the defense:

One example was after the team’s loss to the Las Vegas Raiders. Defensive tackle Fletcher Cox criticized how he was being used in Gannon’s system, stating that he was used to being in a more attacking-style defense. Gannon made some adjustments after that, allowing Cox to rush more from his three-technique area. After that happened, the defensive line looked like it was getting more pressure than it had previously in the season.

The constant criticism about Gannon being passive against opposing offenses is warranted. The Eagles played a lot of zone coverage this past season to prevent big plays downfield. While that aspect of the defense worked, with the Eagles only giving up 39 explosive plays in the passing game, the second-lowest total in the league, it allowed opposing quarterbacks to attack the defense underneath and resulted in high completion percentages.

It does take an adjustment period to get accustomed to each player’s idiosyncrasies, but it may have cost the team some early wins. Gannon is bright and has earned the respect of his players. If he does not get one of the head coaching jobs he has interviewed for, and he gets more players that fit his defense, Gannon could have a better 2022 season, one that could lead to a Top-5 defense.

All I know is if I brought a C+ home, my parents certainly wouldn't be happy. And the school wouldn't be asking me to move up a track. But that seems to be the case for Gannon anyway...

Could Eagles move on regardless?

While Gannon's job this season doesn't necessarily jibe with all the head coaching interest he's received, it wasn't so bad that the team would go the other way and fire him, right? I mean, we know there were plenty of people calling for his job a month or two into the season — and that he left a sour taste with the Bucs loss — but it's hard to imagine Nick Sirianni, Howie Roseman and Jeff Lurie aren't going to at least give him another chance (assuming he isn't hired away).

That's how Inquirer beat writer Jeff McLane currently views the situation, especially given the interest in Gannon around the league.

That tactic was exploited by top quarterbacks, but it was effective against mid-to-low-tier quarterbacks in the second half of the season. On Sunday, however, Tom Brady became the seventh quarterback — he did it first in October — to complete more than 77% of his passes against Gannon’s defense.

“That doesn’t sit well with us,” Sirianni said after the game. “We played some good quarterbacks, too, but again it should never be that high.”

Lurie and Roseman were apparently all-in on the Gannon hire. While a Cover 2-based scheme is unlike any they’ve had before, it has had a bit of an analytically supported resurgence in the NFL because it increases the chances for mistakes and entices offenses to run.

As for how Lurie views Gannon’s performance, it could come down to how he views Roseman’s personnel. But rarely has a defensive coordinator been fired after one season, especially one like Gannon who is currently up for three head coach vacancies.  [inquirer.com]

Still, even if the Eagles want to keep Gannon, that doesn't mean they'll be able to. Should they lose their DC, who are a couple names they might look at to replace him?

Over at NBC Sports Philadelphia, Dave Zangaro took a look at 10 potential candidates, and it included a few former head coaches, which would be an interesting pairing with a young coach in Sirianni, not unlike the Doug Pederson/Jim Schwartz combo that, while it produced some awkward moments at times, also led the team to its only Super Bowl. Beyond those names, Zangaro also includes another name who, like Gannon, is getting some interest for head coach openings.

Vic Fangio: Fangio’s time as the Broncos’ head coach came to an end when they fired him after  this season. Maybe he’s not a great head coach but Fangio is one heck of a defensive coordinator. The 63-year-old has been around for a long time and has a strong reputation in the league.

Jerod Mayo: Mayo, the Patriots’ inside linebackers coach, is getting more looks and interviews as a potential head coach this season but if he doesn’t get a job maybe he’ll be willing to take a stepping stone job somewhere else. The Eagles interviewed him for their head coaching vacancy a year ago. The problem with Mayo is he might not be long for the position if he gets it and you might have to go through this again.

Brian Flores: I put Flores on this list but I think there’s a very good shot he ends up with another head coaching gig. Heck, he shouldn’t have been fired by the Dolphins after this season but here we are. If he is available, he’s a guy with a solid track record. But the problem, like with Mayo, is that he might not stick around long.  [nbcsports.com]

After looking at some external candidates, what if Sirianni and the Eagles wanted to promote someone from within to take over for Gannon? SI.com's Ed Kracz mentioned a pair of in-house possibilities for the Birds...

Dennard Wilson. The defensive backs coach could be one of two in-house promotions the team turns to in the event Gannon departs.

He certainly fits the mold, with his 40th birthday coming up in March, and his experience is certainly noteworthy after getting his start as a pro scout for the Chicago Bears in 2006 and climbing the ranks since then. Before joining Sirianni’s staff, he was the passing game coordinator for the New York Jets and helped develop Jamal Adams and Marcus Maye, who, in 2020 led the team’s secondary in tackles (86), passes defended (11), tackles for loss (4), and sacks (2). ...

He could be the favorite if Gannon leaves.

Nick Rallis. This would seem like a long shot, but maybe not. Granted, he is just 28, but should that matter? Look at the job he did this past season, his first coaching linebackers for the Eagles. Alex Singleton and T.J. Edwards finished 1-2 on the team in tackles with Singleton getting 130 and Edwards finishing with 124. ... It would be a big jump for Rallis, but not out of the question.  [si.com]