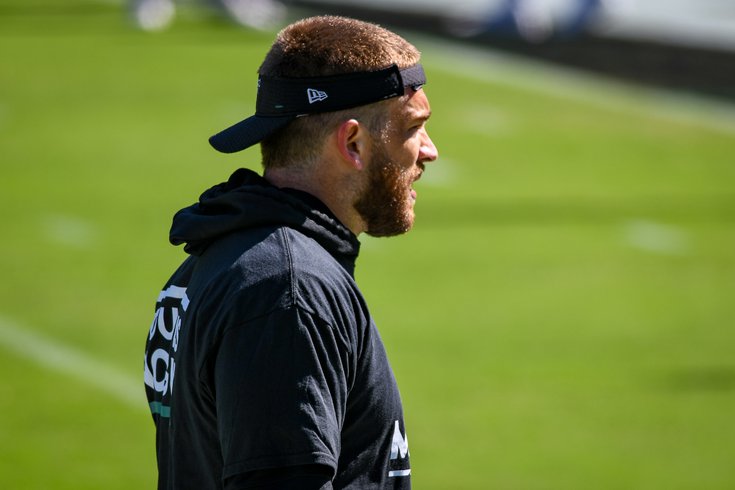 After finally getting healthier with the return of some key players the last few games, the Eagles took a big hit this week, when they lost Lane Johnson for the season with an ankle injury. The Seahawks, meanwhile, have been banged up this year as well, though they have found a way to overcome their injuries.

• RT Lane Johnson (ankle): Johnson's season is over, as his recurring ankle issues continue. We covered Johnson in more depth here. He'll soon land on injured reserve. The Eagles' starting OL will look like so on Monday:

• OG Sua Opeta (back): So I guess Nate Herbig will be active again.

• WR J.J. Arcega-Whiteside: Arcega-Whiteside was a healthy scratch last Sunday in NJ against the Giants, 19 months after the Eagles selected him in the second round of the 2019 NFL Draft. He is essentially the seventh receiver in the Eagles' pecking order, at best, behind Travis Fulgham, Jalen Reagor, Greg Ward, Alshon Jeffery, DeSean Jackson, and John Hightower. In 2019, Arcega-Whiteside had 10 catches for 169 yards, and 1 TD. In 2020, he has 2 catches for 45 yards.

• DE Genard Avery (21-day practice window activated): Avery had one productive game, went back to barely playing to make room for Vinny Curry, and is now on IR.

• WR DeSean Jackson: Jackson played three games, missed three games, returned for one game, and is probably done for the season. Predictably, relying on Jackson to stay healthy this season at this stage of his career was a mistake.

• CB Cre'Von LeBlanc: Strap is a fan favorite, but he has not had a great season.

We'll update with the Seahawks' injury report when it is made available. For now, here are their Thursday and Friday injury reports:

The Seahawks again list RB Chris Carson as limited and RT Brandon Shell as a non-participant (Thursday was an estimation as Seattle didn't practice). Carson still appears on track to return for Monday night at Philadelphia while Shell seems doubtful. Cedric Ogbuehi is his backup. pic.twitter.com/WKNyoc4RFX

• CB Quinton Dunbar (IR): Dunbar is a good starting corner who is currently on IR with a knee injury. He could return this year, but is obviously out against the Eagles.

• DE Bruce Irvin (IR): Irvin had 8.5 sacks for the Panthers last season. He was a starter with Seattle this year before a torn ACL ended his season after two games.

• TE Greg Olsen (IR): Olsen suffered a ruptured plantar fascia (foot). He was a quasi-starter who contributed 23 catches for 224 yards and a TD in 10 games this season.

• S Marquise Blair (IR): Blair was a 2019 second-round pick of the Seahawks who played in 14 games as a rookie, starting three. 32 tackles, 2 FF, struggled in coverage. He was Seattle's fifth DB this year, and was lost for the season after two games with a torn ACL.

• RB Rashaad Penny (PUP): Penny is still recovering from an ACL tear suffered last season, but he could return to the field this season. 5.3 career YPC.

• DE Branden Jackson (IR): Jackson played in 15 games for Seattle last year, starting 3. His season (and possibly career) is over with a spinal condition.

• WR Phillip Dorsett (IR): Dorsett is sidelined with bone spurs. He won't be playing against the Eagles, or fighting in Vietnam.

• CB Neiko Thorpe (IR): Career back-of-the-roster guy, but maybe noteworthy because the Seahawks are already very banged up at corner.

• WR Josh Gordon (suspended): Gordon is out indefinitely while he serves his fifth suspension.

• DE Damontre Moore (suspended): Rotational DE, and not a very effective one. 8 tackles, 1 sack this season.