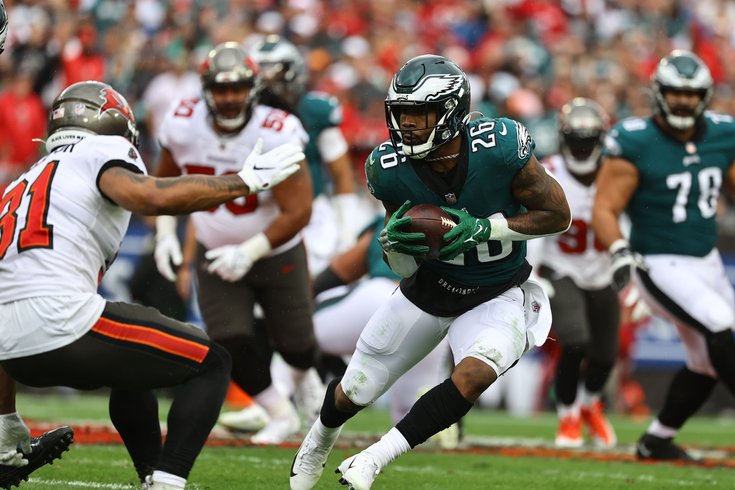 Miles Sanders failed to find creases against the Bucs.

In their wild card round loss to the Tampa Bay Buccaneers, the Philadelphia Eagles played 66 snaps on offense, and 73 on defense. Let's just get right to the snap counts, and some notes.

Analysis: Hurts had a clear "stock down" game, and left a bad last impression heading into the offseason. We'll get more into Hurts' overall standing with the team plenty this offseason, but for the purposes of this snap count analysis, let's focus on durability.

Hurts entered his postgame press conference wearing a walking boot, after looking slightly gimpy at times on Sunday. I think there are two ways you can look at that:

I think we already knew Hurts was tough. That question didn't need to be answered, so consider me part of the pessimist group on the durability front.

Analysis: It's mildly interesting that Gainwell got the most snaps among the running backs, though I guess that makes some sense since the Eagles were forced to throw a lot while trying to come back from a large deficit all day.

Sanders had a bad day running the ball. In the limited opportunities he had, I thought he missed some open holes, and when he was bottled up, he opted to either dance or run horizontally instead of plowing forward and minimizing the damage.

Scott looked explosive on his 34-yard TD run. That was his only carry of the day.

Analysis: We covered Reagor's badness and Smith's lack of targets in our 10 awards, so we won't rehash all that here.

Watkins made some nice plays catching the football, but his game needs refinement. You can't be blocking defensive backs down the field on screen plays before the pass is out. It's the 18th game, and offensive pass interference calls are nothing new for this team.

It'll be interesting to see if there's more changeover at the wide receiver coaching spot this offseason, as the Eagles have failed to get anything out of Reagor, J.J. Arcega-Whiteside, and John Hightower.

Analysis: Goedert is really good, but his drop in the first half was a killer. If he can be more consistent, he's a top 5 TE, easy. But he has to clean up those concentration moments.

The Eagles should be shopping for a TE2 on Day 3 of the draft, in my opinion.

Analysis: Johnson (knee) was replaced by Clark during the game, but no announcement was made by the team regarding his injury.

Analysis: The D-line showed up on Sunday, particularly Kerrigan, who was a surprise standout after showing nothing all season long. After Tristan Wirfs left with an injury, Kerrigan dominated Bucs backup RT Josh Wells.

Barnett was flagged for an incredibly weak roughing the passer on Tom Brady. Just a ridiculous over-officious flag.

Analysis: The linebackers didn't play poorly, necessarily, but it's clear that the Eagles need to address the position with some legitimate resources already. They cannot continue to try to find cheap talent there.

Analysis: Maddox got eaten up by Mike Evans whenever Evans moved into the slot, and it's hard to blame Maddox. Slay didn't follow Evans inside, which was a glaringly bad tactical decision by Jonathan Gannon, seeing as Maddox is 5'9 and Evans is 6'5. If I'm Brady, I'm looking at that matchup and I'm like, "Really? Thank you."