John McMullen: Eagles left the door open for a 'trained killer' with their flawed game plan 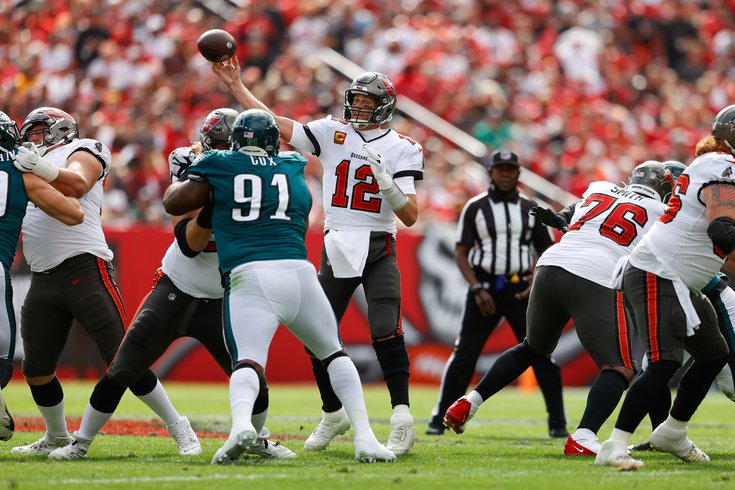 Should we be surprised, at all, that Tom Brady carved up the Eagles Sunday?

When the Eagles were waiting to find out who their wild-card playoff opponent would be I asked Nick Sirianni about how he handled the uncertainty from a preparation standpoint.

In other words, the Tampa Bay Buccaneers were the most likely opponent for the Eagles in the first round so Sirianni and his staff spent more time on them than any other potential opponent.

That’s the same reason many of us who cover the NFL on a daily basis projected Tampa Bay to beat the Eagles.

All the empirical evidence pointed to the Bucs and particularly Tom Brady doing what has become second nature to him.

Brady’s playoff win on Sunday was his record 36th as an NFL starting quarterback, more than all but two entire franchises over the past 50-plus years. Conversely, the Eagles’ quarterback, Jalen Hurts, was playing in his first and his head coach Nick Sirianni was also at the controls for the inaugural time.

Unless Father Time finally stopped hitting the snooze button on Brady for one random Sunday in January, this was as big a mismatch as you were going to get even with the Bucs down their top two running backs, two of its originally projected top three receivers, and after losing All-Pro right tackle Tristan Wirfs to an ankle injury in-game.

Much like the regular-season affair between these two teams, this one wasn’t as close at the 31-15 final score indicated.

When Brady hit a streaking Mike Evans for a 36-yard score with 5:18 left in the third quarter, it was 31-0 and Tampa Bay took the foot off the gas started thinking about its divisional-round foe while the Eagles’ piled up meaningless garbage-time numbers.

The game was won in the first half, arguably in the first 22 minutes when the Bucs scored on three of their first four possessions en route to taking a 17-0 lead and rendering the Eagles’ run-first mentality moot.

From the coin flip, which Philadelphia won and deferred, Sirianni’s plan was flawed, a failure to realize what he was up against and what the coach had at his disposal to combat it.

“I know what you’re getting at there as far as being a run-first team,” Sirianni said when asked by PhillyVoice what kind of stress getting behind put on his offense. “It’s hard to be down 17 points, but I think what you’ve seen from our offense the entire year is that we’re an explosive offense, even though we are a run-first offense.”

Sirianni claimed he didn’t deter from his usual philosophy until a Jalen Reagor muffed punt turned into a short Rob Gronkowski touchdown and a 24-0 Bucs advantage,

“I didn’t feel the stress until we went down maybe 24,” the coach claimed. “I felt like we could play our game still, where we were mixing it – maybe passing it just a little bit more, but the explosive plays weren’t there today.”

The explosive plays the Eagles did admittedly generate this season are based on a significant running game opening up play-action for Hurts along with the occasional off-schedule play by the young signal-caller.

So it’s a chicken and the egg causality dilemma.

“Anytime the explosive plays aren’t there, I’m always going to put myself in that situation first. I’ll have to see the numbers of what we were, but some of our explosive plays came when we were down, and they were playing a little bit softer,” Sirianni admitted. “I didn’t feel that press until we were down maybe 24-0.”

And that’s the problem. The “press” should have been the opponent, not the predictable unraveling on game day.

This wasn’t Garrett Gilbert or Jake Fromm, this was the quarterback who defensive coordinator Jonathan Gannon described as a “trained killer.”

And the Eagles left the door wide open for him by believing a soft schedule in the second half meant more than it really did.