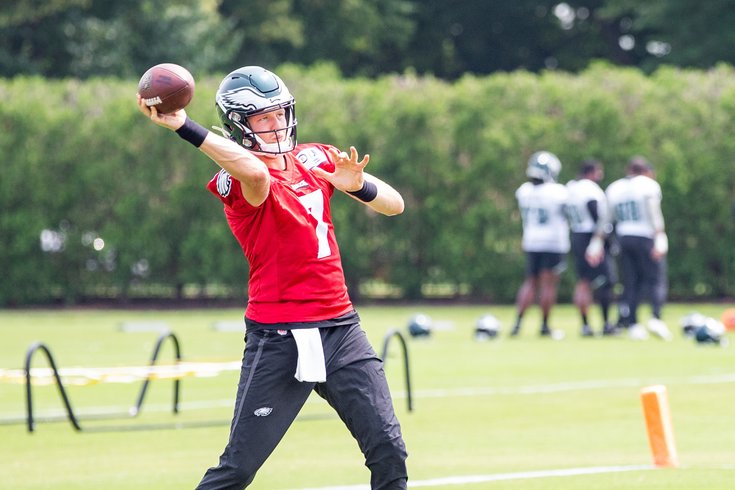 On the eighth day of Philadelphia Eagles training camp practices, the Birds had multiple "live" 11-on-11 tackling sessions, and they suffered a casualty. That would be Kamu Grugier-Hill, who appeared to injure his left knee. As always, we have notes.

• We covered Grugier-Hill's injury in more detail here, but he was clearly in discomfort. Hope for the best. On the positive injury front, Miles Sanders left practice early on Thursday, but he was back out there today, and looked good.

• I'm going to sound like a broken record on this in regard to Sanders, but he has three concern areas heading into the NFL as a rookie:

We won't be able to glean anything by watching practices on concern No. 3, but we can to some degree with concerns No. 1 and No. 2.

In pass protection, Sanders got two reps in one-on-ones. He was aggressive moving up quickly to meet LB Alex Singleton close to the LOS, and then he did a nice job mirroring and matching him. In his second rep, again, he met LB T.J. Edwards close to the line of scrimmage, but Edwards got the edge on him a bit. Still, it was good enough, in my opinion.

In RB vs. LB receiving drills, Sanders dusted Grugier-Hill (pre-injury, obviously) on a deep route. Grugier-Hill is the most athletic linebacker on the team. Sanders double-caught the football, but he has shown that he'll be able to at least get open in the NFL if he has some space to work with.

• The loser of pass protection drills was Josh Adams, who whiffed both on safeties Andrew Sendejo and newcomer Johnathan Cyprien. Otherwise, Adams had a nice day running the football.

• Another day, another deep connection from Carson Wentz to DeSean Jackson. Wentz threw a pretty touch pass on a fly route to Jackson, though it was only about 30 or so yards down the field because he got it out so fast. Great throw, and Jackson made the route and the catch look easy. He got behind Avonte Maddox on the play, and Wentz was able to drop in into the bucket in front of Malcolm Jenkins.

• This could be the first year in a while that an undrafted rookie free agent doesn't make the team. If I were to pick one, it would still be Edwards, who has been serving as the signal caller on third team. If there’s advantage that he has, it’s that he plays MIKE LB, and the team doesn’t really have a pure MIKE backer. Edwards had a nice pop on Donnel Pumphrey today.

• For the fullback enthusiasts among you, Jordan Howard got a carry as one today. It went nowhere.

• Boston Scott showed some juice today running the football. He juked Zach Brown in the hole, bounced it to the sideline, and stiff-armed 6'2 UDFA CB Jay Liggins to the ground on his way. I can't see how Scott can make this team with Darren Sproles back, but it was an impressive run.

• In a "live" goal line session, Jason Peters caved down the entire right side of the D-Line, opening up a ginormous hole for a Howard TD.

• Rookie fourth-round DE Shareef Miller had his first noticeably good day of camp. He stuffed a run play in a goal line setting, and had two sacks in team drills.

• Bad snaps from Stefen Wisniewski have been a theme this camp, and he had another one today in goal line. Not good. I think he'll make the team, but he's not a lock, in my view.

• We had more OL-DL one-on-ones. The highlights:

• After a slow start to camp, Nate Sudfeld is beginning to stack good practices, which is an encouraging sign. During a "live" session, he led a long drive that ended with a Dallas Goedert TD in the back right corner of the end zone.

• We had kicking! Jake Elliott drilled a 54-yarder to end practice. Let's go ahead and update his chart:

Is it a good or bad omen for Grugier-Hill that the practice ended on a 54-yard field goal? It was good, after all.