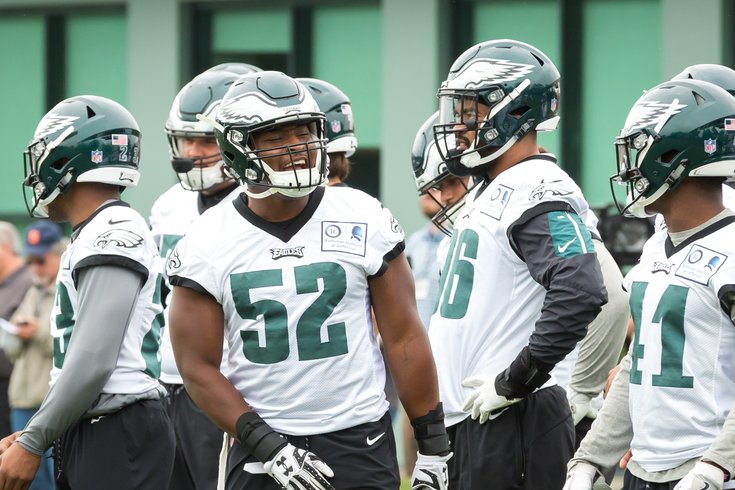 About 12 hours after the conclusion of their open practice at Lincoln Financial Field Sunday night, the Philadelphia Eagles were back out and practicing on Monday morning. As you might expect, it was a lighter, "10-10-10" practice, in which the offense and defense "service each other," as Doug Pederson explained a few days ago.

• We'll start our notes off with really the only thing we can truly evaluate, performance-wise... the kicker! Jake Elliott remains perfect throughout camp, after going 5/5 on Monday. He is now 23/23 throughout camp so far.

One of Elliott's kicks today (the second 38-yarder) skimmed off the upright and in. The Eagles should cut him immediately.

Meanwhile, out in Los Angeles, camp reports suggest that former Eagles kicker Caleb Sturgis is struggling. I'm not sure how up to date these are, but it would appear that ol' Power Sturge is in danger of losing his competition with former second round draft pick (lol) Robert Aguayo.

Day 2 of the kicking competition for the Chargers: Caleb Sturgis finished 4 of 7, with misses from 42, 45 and 50. Roberto Aguayo finished 8 for 8 with a long of 53 yards.

If Sturgis were to lose his kicking competition to Aguayo, that would actually be bad news for the Eagles. Why? Buckle up!

Sturgis signed a contract with the Chargers that would qualify toward the compensatory pick formula. If the Chargers released him at 53-man cutdowns, he would no longer qualify, and the Eagles would miss out on a comp pick. (It would likely be a sixth-round comp pick, but I can't explain why in less than 500 words, so just trust me on that.) In my view, Sturgis would really have to crap the bed to lose that job, seeing as the Chargers gave him a $1 million signing bonus.

Still, it's possible, considering the Chargers were last in field goal percentage a season ago, at a disgusting 67 percent. If there's a team willing to cut a kicker with a million-dollar signing bonus if they truly believe the other guy is better, it's them.

Conversely on the compensatory pick front, Eagles free agent acquisition Corey Nelson has not flashed at all in camp. He too qualifies toward the comp pick formula. If the Eagles released him at 53-man cutdowns, he would no longer cancel out one of the players the Eagles lost in free agency, and would thus gain the Eagles an extra seventh round pick.

Man, I really need a girlfriend/life/hobby.

• In regard to the "third linebacker" competition, I noted last night that if I were Jim Schwartz, I would have Kamu Grugier-Hill in the lead. I'll unpack that a bit here.

To be clear, that is just my opinion. Schwartz may very well favor Nate Gerry or Nelson. I have no idea.

I'll also make one other point. I would have Grugier-Hill as the front-runner specifically at the WILL linebacker spot, because I think his athleticism is a really nice fit there as a replacement for Mychal Kendricks. However, if Jordan Hicks or Nigel Bradham went down, I would start Gerry over Grugier-Hill, because Gerry has more versatility to play all three linebacker spots, and is better against the run. I would, of course, just leave Grugier-Hill at the WILL spot in the event of a Hicks/Bradham injury.

Does that make sense? Good? Good.

• It dawned on me today that I have not yet seen an Eagles players fumble the football, aside from some bad Isaac Seumalo snaps, or some botched hand-off exchanges.

• Corey Graham was a participant in practice last night, the same day he signed with the team. He also got a lot of reps today, working in three-safety sets. Last night, Graham denied (with a smile) that he was just ducking the first week of training camp by delaying his signing until the first week of August, like he did last year as well.

Malcolm Jenkins, however, sees through that BS.

"We've been on his neck since he stepped in the building," said Jenkins. "He pulled a nice little vet move. Maybe I'll take a page out of his book when I'm 12-13 years in, but he's obviously a guy who has played a lot of ball. We're not worried about him taking a ton of reps."

• Last night, as we mentioned in our practice notes, Donnel Pumphrey had a bad drop in the end zone. A bunch of reporters tweeted exactly that, and Pumphrey responded to one of them.