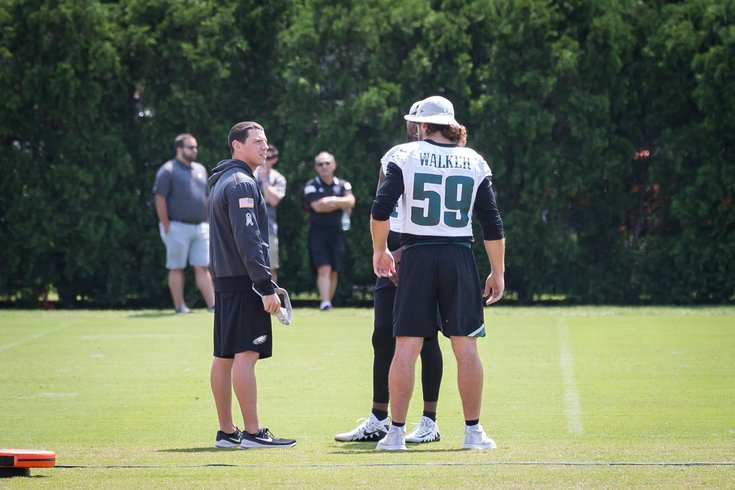 Joe Walker during an OTA at the NovaCare Complex.

Philadelphia Eagles training camp is over! Well, sort of. They'll still practice most days up until 53-man cutdowns, but the media just won't be allowed to watch the practices anymore. So the idea that "training camp is over" is a little silly to say, but whatever. I digress.

Anyway, the "final" day of camp was a lame "10-10-10 practice," in which the offense gives the defense certain looks they might see in a game, and vice versa, so there's isn't the same level of competition as a normal practice. Still, as always, we have notes.

• Avonte Maddox got first team reps with the defense over Sidney Jones once again, as he has all week. Based on that, it's a pretty good bet he'll get the nod in the game against the Patriots on Thursday.

• In other depth chart news, Nate Gerry was again the third linebacker, and the Eagles showed a run-stopping look in which Joe Walker came on as the fourth linebacker.

I would say that Gerry, Walker, Nigel Bradham, and Jordan Hicks will all be on the team, as will Kamu Grugier-Hill. That should leave just one open spot for either Corey Nelson or LaRoy Reynolds.

• Tight end Billy Brown had a really nice running one-handed catch over the middle today, though I believe he has a lot of work to do to make the roster. I would have him fifth in the pecking order at the moment.

• For the first time ever, I charted a quarterback's stats during practice. I made an exception for newcomer Christian Hackenberg, who the team signed on Sunday. Hackenberg was 2/6 for roughly 20 yards, 0 TD, and 2 INTs, and an unofficial QB rating of 4.2. Again, it's a setting in which the offense in this case was just giving the defense certain looks, and thus not as competitive. There were still some pretty ugly throws though.

• And finally, Cameron Johnston did some "pin 'em deep" punting, and I thought he did a nice job. With the line of scrimmage at the opponents' 40, Johnston landed his punts in the following spots:

And with some notes on the punter, that will wrap up our practice observations for the 2018 season.