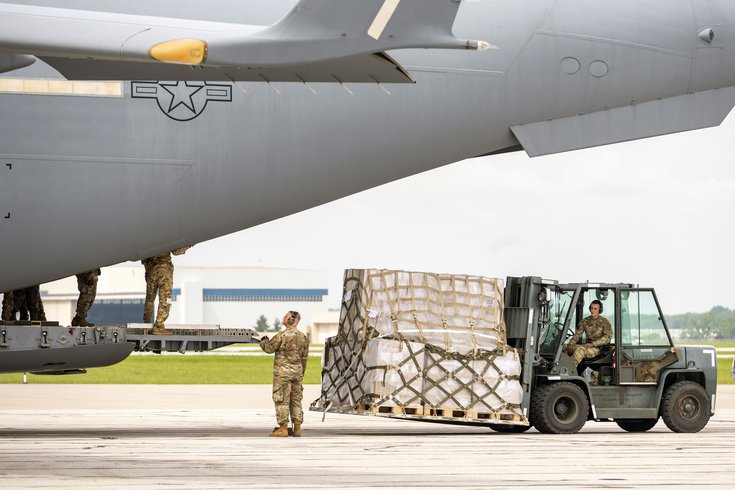 Soldiers at the Ramstein Air Base in Germany load pallets of baby formula onto a plane to be shipped to the U.S. amid the nationwide shortage.

An emergency shipment of Nestlé formula for babies with special dietary needs will arrive Wednesday in Lehigh County.

The White House said 114 pallets of Gerber Good Start Extensive HA will be transported to the Nestlé distribution facility in Upper Macungie Township, outside Allentown, immediately after they arrive at the Dulles International Airport in Washington.

The formula is arriving from Ramstein, Germany via a FedEx Express flight sourced by the federal government in an effort to mitigate the nationwide shortage. Once it arrives in Pennsylvania, the formula will be distributed to hospitals, WIC programs and retail stores across the United States as early as this weekend.

Nestlé prioritized this specialty formula because it's made for babies who are allergic to cow's milk, the company said. Parents of children with special dietary needs have had a particularly hard time finding formula since the shortage began in February.

This delivery is the second emergency shipment from abroad arranged through the Biden administration's Operation Fly Formula. The first arrived in Indiana on Sunday via planes provided by the U.S. Air Force.

Nestle said its FDA-approved factories abroad have been manufacturing formula at full capacity since the shortage began in mid-February.

The U.S. Food and Drug Administration's guidelines for baby formula are much stricter than those in other parts of the world. That makes importing the product a challenge.

But the FDA is giving companies more flexibility when it comes to importing foreign formulas on a temporary case-by-case basis. This change in policy will last through November.

The formula shortage in the U.S. began with the recall of products manufactured at an Abbott Nutrition plant in Sturgis, Michigan in February after the facility was linked to bacterial infections. The company expects to reopen the plant next month.