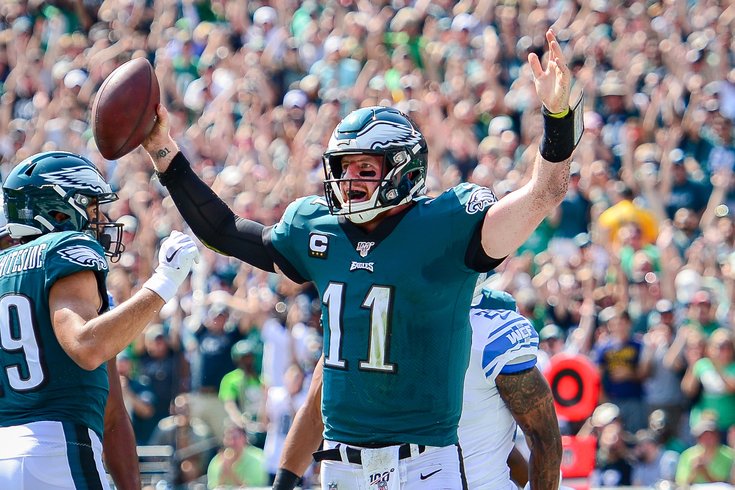 Once again, we find ourselves building up the most unrealistic expectations — expectations we then watch come up short, leaving us to wonder what could have been. This year — this ridiculously crazy year — you’re off the hook.

Wentz is facing another uphill battle with his protection and outside weapons, from health to youth, in a time when we should be watching more continuity than just the Wentz-to-Ertz connection. He’s out of the rookie deal and the team should be balancing the budget in terms of adding weapons – from wideouts to offensive linemen – to make his life easier. Instead it’s relying on older guys staying healthy and younger players picking it up extremely fast. They were actually going to start Andre Dillard at LT before he got hurt! What a disaster.

The Giants are making moves, Washington won’t be a total pushover for long, and Dallas – yes, Dallas – sits there as the odds-on favorite to win the NFC East. This division isn’t as putrid as last year, but there is still a recognizable divide between the top and bottom half. The Eagles should never blur that line, and in fact be more of a favorite than anyone simply because they boast the division's best QB. I don’t know how long the Birds front office feels they can backdoor their way to three or four wins locked in the division, but it’s becoming a risk this year.

Why not take advantage of the weak division? Instead, we are holding our collective breath that this line can stay together. Brandon Brooks going down was beyond painful to see. But there was still enough time to formulate a plan. They let Jason Peters linger out there for months before making the decision he would fit best. Dillard was getting pushed back every day at camp, as was his backup Jordan Maialata.

The blindside tackle position was in the hands of those two. That’s negligence in trying to keep any QB – especially one who’s been hurt as much as Wentz – upright. This is coming off the COVID offseason, even more reason to try and beef up that position, but instead there is absolutely no depth. And the team doesn't seem like its going to move their Hall of Fame lineman back to his natural position at left tackle.

Again, what a mess.

Heading into a pivotal season for Wentz both individually and for this team, the Eagles decided to balance out rookie WR help with the same two guys who barely saw action last year. Desean Jackson and Alshon Jeffery still have talent to help this team, if and only if they are healthy. It’s a huge ask for a position that felt forgotten about before the draft. I loved the Jalen Reagor pick, but knew it was too much for any rookie, particularly in this particular, to just step in and dominate.

For a team that sat back and watched Wentz throw to practice squad guys last season, you would think this would be a higher priority to get Wentz better outside help. I guess you can always fall back on the two TE’s and hope defenses don’t “game plan” out Zach Ertz each week. But even then, expecting Ertz to be some 100-catch receiver this year is unfair and unrealistic.

Even the coaching saw overhaul this offseason as Doug Pederson “upgraded” the staff around him. This is the year we see the team actually get off to a hot start, right? How many more seasons can this offense stumble out of the gates, putting Wentz (and the defense) in absurd predicaments. There is an immense amount of pressure for the coaching staff to change this — like, yesterday – and it will be their undoing once again this year if nothing gets fixed.

Speaking of pressure, it tends to slide downhill and in this case has landed on the shoulders of Miles Sanders. The Eagles will try and band-aid everything listed above by having Sanders take on an overwhelming amount of work. I love the kid and am super excited to see him play more. But, without a ton of depth behind him, it’s asking a ton of one player in a situation that we haven’t really seen play out here in years.

We saw Wentz put up stupid numbers last year throwing to guys who wouldn’t even have a real face on the new Madden. That still wasn’t enough for this team to make the right moves around him, at least for this one crazy season. Instead we will watch them stumble out of the gate, hold our breath when he drops back, and cross our fingers guys around him can keep the quarterback upright. That doesn’t bode well for the season.

But I’ll still give Jeffrey Lurie some credit, this thing is nowhere near as bad as the Sixers.

This week’s tweet of interest centers around what else you are watching regarding the NFL season. I put a tweet asking that very question, taking out the local angle of the Eagles. Some great responses from Brady to Lamar to overall interest in the league.

Outside of your own team, what's the single most intriguing story to you as we head into the #NFL season?

Jimmy Butler willed his team to a Game 1 victory over the Bucks. There's no other way to put it — and even former teammate Joel Embiid was impressed. The guy who immediately sniffed out how toxic of a culture there was here with the Sixers was the same guy who was impossible to slow down Monday night in Orlando. According to TheLines.com's consensus odds, the Heat are +381 to win the Eastern Conference after that big win and I’m starting to think there’s an actual chance they can do it. Boston could knock off Toronto, and a Heat series win against Milwaukee would do wonders for their confidence.

I just don’t understand how anyone can watch what’s going on between Jamal Murray and Donovan Mitchell, or Jimmy singlehandedly beat the Bucks and think, “The Sixers are built to compete in this league.” Tough sell.

I want to keep this as open of a forum as possible. Please hit me up on Twitter with any questions you have by DM'ing @shandershow.