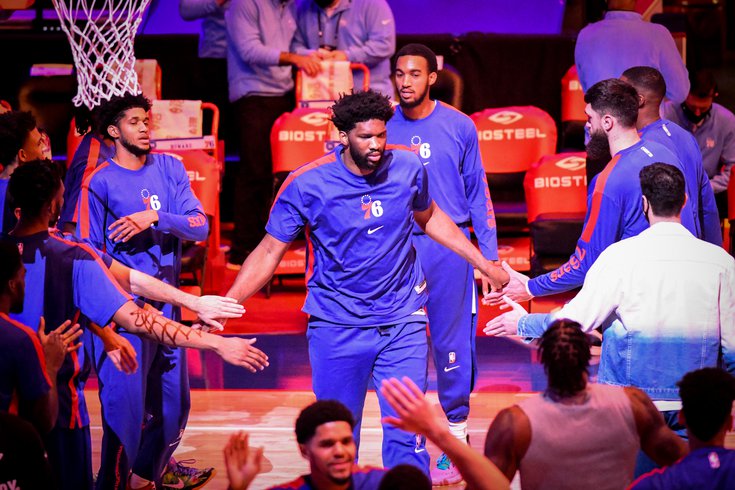 After another forgettable end to the season, we were all hit with a similar message from Joel Embiid. Maybe something we’ve heard before, or maybe it just started to sound like that. Either way, it was turning into Charlie Brown’s teacher.

He did it, folks. Embiid not only lived up to the off-season promises made following his team’s exit from the bubble, but also raised the play of everyone around him. He said something about getting better, about making the team better, and lived up to all of it. That is something that should always be applauded in any sport.

Embiid established something else in this early season of domination in the NBA; he’s now the most important athlete in the entire city of Philadelphia. Protect this man at all costs.

This is no knock on Carter Hart, Bryce Harper or Carson Wen- just kidding. It's not about anyone specific. It’s more the nature of what’s going on here. Some of it is simply how the NBA works. We know you need your MVP, your best scorer and most dominant player to lead you to glory. As great as Tobias Harris is playing, the Sixers won’t make it to the conference finals without a healthy Embiid.

There’s a lot of stress on your superstar(s) carrying weight, and unlike even the NHL, you can’t hide them in the playoffs. Which brings us to the ongoing sports talk radio battle, “Who is more valuable, Embiid or Hart?” and why it actually is the only question to ask.

OK, maybe not to Joey C in Ridley Park. However, it’s a truly valid question about which of our two superstars carries the most value, and with it, pressure to live up to the hype. We want both to succeed, and I would never pit them against each other in anything other than the most positive light. But there is a key difference here, one that Embiid actually has in his favor in this argument but works against him in real life… Time.

Nobody has less time to complete their task than Embiid. Wentz is cooked. I don’t know what low level bar you’ve set for him this year, but the Eagles QB – we think? – isn’t going to return to any MVP level. If Wentz were to win anything at this point, it would be more of a ‘carry him to the finish line’ scenario, like Peyton Manning in his latter years.

The Phillies are locked into a couple of key pieces for a little bit, with good balance in the middle of their lineup and top of the rotation. It’s also not an immediate play. While Harper isn’t getting any younger, the team isn’t making this crazy push to win this season.

Even our young savior in net has years upon years ahead of him, making spectacular save after spectacular save. He’s the key reason why a team that looks awful at times still wins hockey games. He's the missing piece between the pipes, making even the sloppy look good enough to get by. But again, time is on his side — not so much the big man for the Sixers.

Make a trade. Do whatever you need to do. The conversation is no longer a hypothetical, it’s a reality. The window for Embiid isn’t even truly known. It’s still a guess, anyone’s guess, but smart bettors are looking at the under. That’s why this team has to stay aggressive. It’s why I’m thankful for Daryl Morey and a new direction.

We have the most important player on the Sixers since Allen Iverson. Embiid is doing things that we haven’t seen done before – at least in recent times – by a big man. He’s our true Batman. The one who can save this city from the horrors and misery dealt upon us by The Joker Jeff Lurie. Embiid and Hart. Batman and Robin. Bryce and JT make up Commissioner Gordon, because nobody can live up to Gary Oldman without help.

If we get three more years of Embiid dominating the league, is that enough to make a title run? Is there enough help around him no matter how good he is? What can the Sixers actually do to improve the current team, without hurting an area on the court?

So, About that MVP

Can Joel Embiid actually win the MVP and just how important is it for him and the position? We talk with Kurt Helin – an MVP voter for NBC Sports – about how far this thing can go.

I don’t know what’s going on with the Philadelphia Eagles QB situation, I don’t think anyone truly does. What I do know is that Jalen Hurts did something Carson Wentz has yet to do, speak publicly. Hurts went on CBSSportsHQ and was asked the typical questions surrounding a QB controversy. His answers may seem canned to you, but it’s the appearance that speaks to me.

We don’t even have a typical “Welcome to Philadelphia” tweet from Wentz. Meanwhile the young kid is out here doing interviews and taking on pressure from everywhere. I guess Wentz doesn’t trust his legs off the field either.

Bet(s) of the Week

I narrowed down the absurd list of Super Bowl props to three. These three solid bets range from absurd to actual football-related. Last week was the FG/XPT off the crossbar/upright, and we actually found one even more ridiculous. But there’s stuff going on outside of the kicking game where we also found some value.

Play both of these props for the exact final score. The return is through the roof on either one that it’s worth hedging here. Bucs winning should get you +11000 while the Chiefs are +8000. The most common total points reached in an NFL game is 41. Take advantage of that number, especially with the return. You could always have some fun and do the same thing with the next biggest key numbers for totals. Just remember to play both sides of 43, 37, 44, and 51!

Prop 2: First Team to Use a Coaches Challenge

The Bucs are the odds-on favorite here at -120 while the Chiefs rest at -105. Why not take the value? Logic tells us the Chiefs stand a good shot at playing from behind, at least in the first half. Dropping a challenge flag is going to come from a team trying to close the gap. It’s also Andy Reid, who stands a great chance at losing a challenge in the first quarter, then not having that timeout to use at the end of the first half. So many things point to KC in this bet, including the near even-money return.

Yes. Yes. Yes. The return is through the roof. Plus, the best part about taking this bet at Yes +1000 is you will be rooting for the KC or TB Special the entire game. We have multiple WRs who can throw passes, and the creativity of two really strong offenses. No is at -2500 which is ridiculous.

I can see it now… Tony Romo is jumping out of his seat as the Chiefs are getting set at the line. “Jim! Jim! Here it comes, the KC special! Watch out for some trickery here, as I wouldn’t be shocked if Mahomes catches the ball.”

Snap. Toss. Pass. Completion to Mahomes as he crosses into the endzone. Cue Twitter ripping Brady for once again being on the wrong end of this play.