Because, honestly, no one actually knows when COVID-19 will allow life to return to normal. 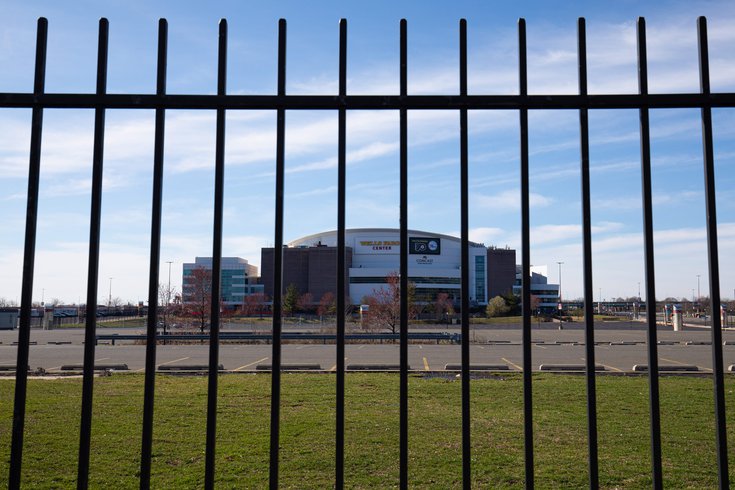 When will the Wells Fargo Center be open again? It's anyone's guess at this point...

When it comes to sports returning, it's time for a reality check.

We may simply have to forgo the NBA playoffs this year. The Stanley Cup Final is in jeopardy. MLB has some ridiculous theory that they are going to start everything – without fans, of course – in May, with players and staff quarantined, away from their families for several months, in one facility. Good luck with that.

Now, we get the NFL throwing their hat into this ring of absurdity with what is actually a rather mundane proposition. If, and only if, the NFL has training camp, you – with the help of HBO – will be rewarded by the league with a doubled-up version of Hard Knocks. The two LA teams will share a stadium and their stories leading up to the regular season. Hard pass on hard knocks. What are you getting from this show that’s new and innovative? How many times can you hear a head coach spew the same platitudes or watch a fringe player get cut?

And, really, does any of this matter? These are all just empty promises, based on the biggest and most unpredictable word right now: “if” — as in if we have training camp. Or playoffs. Or any games at all.

Let's go back to the NBA for a moment, where Adam Silver might have handed you the key to Ford’s maze. While Dana White is creating his own Westworld in order to host his next pay-per-view and MLB is floating out the most insulting of false hopes, Adam Silver gives us nothing but realism. A healthy dose of it too – like that big spoon of red medicine shoved down your throat as a kid.

“The short answer is no," Silver said when asked if he knew when the league would return to action. "Essentially what I've told my folks over the last week is that we should just accept that, at least for the month of April, we won't be in a position to make any decisions."

This is essentially the point of all points when it comes to the return of sports. The NBA won’t even know a timeline until May 1st. Anyone telling you otherwise is either too busy buying a secret island or lying to you. At least Silver has the guts to treat us like adults.

The NFL Draft is already set for a virtual stage with no hugs for Roger Goodell and no team officials at the team facilities, let alone at the draft itself. It will be something else to see a shots of Howie Roseman in his house, Goodell announcing the pick without fans, and (fill in the blank WR) celebrating with an Eagles hat. You can even bet on the global market who the player will hug first and how many people will be in the room.

There’s actually some value here if you play the odds.

Who will No. 1 overall pick hug first?

The parents will be the easy choice here as evident by their odds. The value however lies in the 7:1 pick of the sibling. We are already expecting low turnouts due to social distancing. The girlfriend and friend are out, or at least won’t be sitting close enough to the player. We are betting on immediate reaction, not seeking out someone specific to hug. The brother or sister – living in the house and also quarantined with the family – is the best shot outside of the parents.

You might as well take a flyer on the Over 9.5 people in the same room. Here’s where you play the odds of humanity not what’s on the board. Someone is going to mess it up and have a larger group, it’s just human nature.

Total dogs shown during the first round: Over/Under 3.5

Lastly take the over here. Who doesn’t love dogs? Plus, the networks are going to have to show something outside of the three or four people in the room.

Coping with the COVID-19 virus from Wuhan

We're back with another update on COVID-19 with Dr. Aryeh Shander — and, yes, if you haven't been watching, that's my father. I want to keep this as open of a forum as possible. Please DM any questions you have for us on Twitter (@shandershow).

I’ve come to a sobering conclusion that waiting each week for a new episode of this show further exasperates me in times of quarantine. If I could binge this show – like Ozark – I think my appreciation for this season would significantly improve. Our society is drastically shifting as a result of us staying home, to the point where industry and interaction will forever be changed. If Ozark was successful in releasing their show seasons at a time, then surely HBO can provide a similar service. Where’s the downside? Some idiot may spoil it for you on Twitter? Even more reason for people to binge, especially during the quarantine.

This week, there was one huge reveal – one that I admittedly did not see coming and enjoyed – two cool fights and a lot of my time wasted. To be fair, I don’t care what Ed Harris is doing on screen, I just want more of him. Like Maeve, the Man in Black is one of the more compelling characters of the show. If he needs to take a back seat to the five – maybe six – copies of Dolores, then OK, I get it. Just as I get Maeve becoming the weird version of a hero in this story.

The entire scene with the MiB and Charlotte felt like an excuse to put Harris on screen, not to maximize his talents. William doesn’t need to be in control, like Maeve doesn’t need similar control, to dominate a scene. So this isn’t about being in a weakened or submissive state, it’s that it was drawn out for no other reason than filler. The scene should have ended as soon as Charlotte backed down the gun in her face. She already had the audio after spying on William, and had the physical evidence needed to commit him.

There is this insistence by the writers this year to turn Charlotte into Dolores – yes, I’m aware of my irony here – but it just comes off weird. The show spent two years focusing on the intricate relationship between Dolores and William. IF Harris and his character were to fade away, it would be an unfortunate undermining of his established value.

And finally... some deals for YOU

- There is an AMAZING sleeve for your ankle and/or knee that has a unique and effective way of stabilizing during workouts. Doesn’t matter if you run, bike, or walk. GO Sleeves is for you! Get 15% off now at GOSleeves.com/shandershow!

- If you live, work, or play in NJ, PointsBet has a crazy offer that’s only available through my code SHANDER. And you will get up to $1,000 spread out over four bets, all risk-free! Sign up any way or use this link with the code already in.

You can listen to Eytan during the week on @foxphlgambler (Mon.-Weds., 6-8 p.m.), and @SBNationRadio on the weekends. You can also catch him on FOX 29 Good Day.