Eytan Shander: Why the Cowboys won't make the playoffs this season 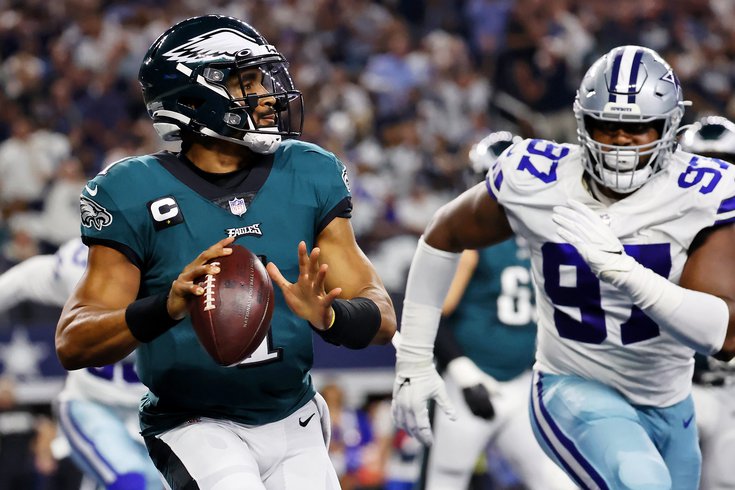 What if I told you the Philadelphia Eagles would make marginal improvement from last year, Jalen Hurts will look better, but not elite, and the defense will bail the coaching staff out once again. All leading to another first round exit for the Birds but with something to build on.

Here’s the kicker in this scenario: The Cowboys don’t make the playoffs.

Would you take that?

Most of you probably would without the caveat, but after looking at some key betting metrics surrounding this year’s Cowboys team – they ain’t making it. Mike McCarthy is a bozo who has no control over his team when things fall apart. That’s important to come back to as we explore this highly realistic possibility.

The first thing to acknowledge is that by missing the playoffs, Dallas may open the door for the Giants or Washington. It also puts the Eagles in a can’t lose position that even Parker Lewis would envy. How could the Giants or Commanders, with injury and talent concerns all over, automatically be slotted into a playoff spot?

Consider this column twofold; a chance to destroy the Cowboys with numbers to boot and putting as much realistic pressure on the Eagles as humanly possible. After all, they are the team who can take most advantage of this circumstance.

Earlier this summer I put out a column on how the Eagles could win the Super Bowl, or at least just make it to the big game. One metric used was how difficult it is for any team that ends the regular season on the road to then travel and win four more. Teams don’t win five road games in a row in the NFL.

The other part of that was how bad it gets for any team that finishes their final two games on the road. This is where the Cowboys come in and how awful of a road, they have in front of them. Back to my buddy Mike Vinsmore in his Week 1 NFL Winners, “Since 2004, teams that close out the regular season with two consecutive road games are almost twice as likely to miss the playoffs completely (42 times) as they are to make the playoffs (22 times).”

The South Jersey Cowboys fan who has never travelled outside of the state is yelling right now, “22 times! Look at this division!” But the reality is we see NFL teams win 60% of the time in their final regular season home game, more if that team hasn’t locked up a playoff spot. Dallas deals with that two-times over this year.

Dak Prescott can throw the football. It’s going to CeeDee Lamb, we know that. So does everyone else on this planet. Ezekiel Elliott is just not a reliable source for offense like he used to be, and there is a seamless infusion of other backs like Tony Pollard. Even clueless McCarthy knows Elliott can’t be what he once was, as he’s just a stat padder against weaker teams.

Prescott doesn’t have the safety valve he once did in Elliott, nor will the offense benefit from nine or ten men in the box to stop the running game. Unless the Cowboys are playing the Giants or a meaningless game against the Eagles, Zeke is cooked.

Back to Lamb. While he’s playing through minor injury, Michael Gallup is coming back from serious surgery. They lose Amari Cooper out of sheer stupidity and are putting too much pressure on guys most defenses won’t even target.

That leaves the below-poverty-line version of Dallas Goedert in Dalton Schultz to take over as the … second leading receiver?

Even Jerry Jones has to be laughing at this one. Prescott is a good QB with misleading power passing numbers, but he’s not throwing Schultz open to a Pro Bowl. Todd Bowles must be laughing his ass off seeing this depth chart ahead of Week 1.

Micah Parsons could win Defensive Player of the Year on a team that’s behind often. These idiots let Randy Gregory walk because nobody mature enough could handle contract negotiations, effectively creating a need at Defensive End. They replaced him with Dante Fowler.

I don’t know which Jones was strapped to the chair during the draft, but they limped their way to three top 100 picks that just filled holes created by the team. They caused problems then fixed them in the draft but are stuck in the same spots – just with lesser talent. Thud.

Lock up two losses right away for Dallas – Week 3 at the Giants and Week 15 at Jacksonville. Prescott is miserable on the road between two home games – 5-10 SU. His TD/INT ratio is 17/13 in that stretch.

This is a stark contrast to the column featuring some metrics, trends, and data on why the Eagles should take a major jump this season. The history of this division would indicate that Dallas is not long to stay on top, and a third team could easily play the role of spoiler.

The Cowboys suck and we should all embrace it before the season even begins. Most of the national media and local pundits see this as a two-horse race to finish atop the NFC East. It’s actually down to just one.

It’s your world, Mr. Hurts, or at least your division.