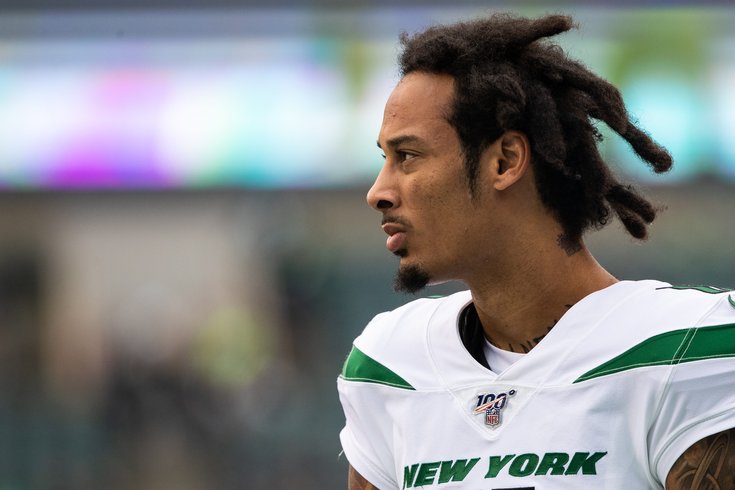 Robby Anderson is from New Jersey, he went to Temple, and he wears green and white every Sunday. He's basically already an Eagle.

With so many injury concerns on so many fantasy football rosters, it's becoming pivotal that team owners pull the right levers each week when choosing who to sit and start.

We've already provided a few names to watch on the waiver wire. Now, as we do every week, we take a look at one player at each position we recommend starting or sitting in Week 9.

(We're not including guys like Saquon Barkley, Christian McCaffrey, or others who are obvious starts, week in and week out.)

Stafford has been on a roll of late and the Raiders are pretty bad against opposing fantasy quarterbacks. This is probably one of the safest starts you'll find with a streamable quarterback all week.

Murray will have his hands full Thursday night against the Niners. San Francisco boasts the top DVOA defense in all of football and will likely trounce the young and flawed Cardinals. Murray is susceptible to being sacked and turning the ball over. Keep him on your bench in Week 9 if you can.

Williams isn't technically the starter, but Aaron Rodgers is having an MVP type season without much help at receiver. Both Williams and Aaron Jones are dual threats and each gets plenty of touches. He scored a touchdown last week even with Jones active and ran for over 100 yards two weeks ago. Start Williams against L.A.

Drake might be a good option going forward, but putting trust in a newly acquired player in their first week with a new team almost never pays off. Avoid Drake at least until he settles into a new scheme in Arizona.

The Dolphins are without top corner Xavien Howard and even with him they aren't doing much stopping defensively. Look for Anderson to shine as the primary target for Sam Darnold.

On the other side of things in the AFC East, the Bills have a stout defense and the quarterback situation in Washington is... murky. McLaurin has been an incredible asset to fantasy owners as a rookie but it is hard to see him being reliable in this Week 9 match up.

Seattle is actually the fourth worst defense against tight ends this season while Brate will be the lone TE option for Tampa with O.J. Howard likely to miss another game. It's a risk but there is a reward for starting Brate in this favorable match up.

Rudolph was incredibly disappointing last week as it really seems as though Kirk Cousins is not a tight end guy. Rudolph will have even less opportunities Sunday with Adam Thielen returning to the line up. Find another option at TE on waivers.