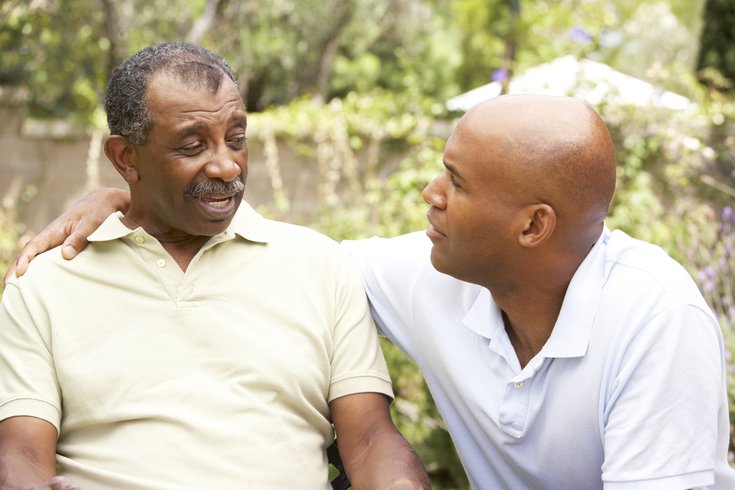 Fatherhood gives men a family constituency where children are ideally suited to inspire their dads to adopt a healthy lifestyle.

Father's Day is an occasion to express love and gratitude for the men who play a meaningful role in the lives of others. As a father and grandfather, I am very much looking forward to sharing a family meal with my two sons and grandson, along with my wife and daughters-in-law.

As a men's health advocate, the holiday makes me reflect on the connection between fatherhood and health, and ask the question: Is fatherhood good for our health?

June is Men's Health Month. Proponents have traditionally used Father's Day as an opportunity to highlight the need for men to take better care of themselves, playing off a man's heightened awareness for longevity when surrounded by family.

While I applaud these efforts and contribute in my own way, men still have a long way to go. Beyond the traditional recognition, Father's Day certainly represents a call to action for men, but perhaps equally so for the family and friends who care about the fate of the men they love.

In need of support and encouragement, fatherhood gives men a family constituency where children are ideally suited to provide this inspiration.

In a sobering article from 2019, Harvard Medical School reported that men die younger than women, and are more burdened by illness during life. They fall ill at a younger age and have more chronic illnesses than women.

Although women see doctors more often than men, men cost our society much more for medical care beyond age 65. Couple these facts with the disproportionately high death toll among men from COVID-19 — largely influenced by their underlying health conditions — and the wake-up call for behavioral change screams to the heavens.

The positives and negatives of fatherhood

While there is research that suggests that becoming a dad has some physical downsides, this same research and others offers a strong upside perspective on fatherhood and the prospect for a man's health, particularly as a source of motivation.

According to the University of California, Berkeley, new studies suggest that having a sense of purpose makes dads healthier, happier and stronger in the face of challenges. In their examination of the role of the father, the Institute for Family Studies suggests that married and residential fathers who were involved were found to be healthier than other men, and had better longevity because of the reduction in risky behaviors. The Journal of Men’s Health & Gender reports that fathers who lose custody were consistently found to be at greater risk for chronic health conditions, psychological impairment and death.

On the down side, the Journal of Marriage and Family reported on a study that found becoming a father induces weight gain and a decline in self-reported health, but reduces alcohol consumption. According to the study, the transition to fatherhood induces changes in health outcomes and behaviors that are both positive and negative.

Equal co-parents and a father's impact

The evolving roles of fathers and a movement toward deeper parental engagement represents a trend that bodes well for driving healthy behaviors in fathers.

The University of Texas says that father involvement has increased dramatically over the past several decades, and simultaneously, the role of fathers in their families has evolved from conceptions of fathers as distant breadwinners to a more holistic recognition that they are equal co-parents.

In describing the changing role of fathers, the American Psychological Association reports that the influence of fatherly love on children's development is as great as the influence of a mother's love. Fatherly love helps children develop a sense of their place in the world, which helps their social, emotional and cognitive development and functioning. Moreover, children who receive more love from their fathers are less likely to struggle with behavioral or substance abuse problems.

According to Pediatric Associates of Franklin, Tennessee, fathers play a role in every child's life that cannot be filled by others. This role can have a large impact on a child and help shape him or her into the person they become.

Research reported by the National Responsible Fatherhood Clearinghouse of the U.S. Department of Health and Human Services shows that children with healthy, involved fathers perform better in school, are more likely to graduate high school and have more friends. They also experience fewer psychological problems, and are less likely to smoke, abuse drugs or alcohol, engage in risky behavior, have sex early, or become teen parents.

The fundamentals are fairly straightforward. They key is action. Here is a simple game plan from Dr. Biren Saraiya, of Rutgers Robert Wood Johnson Medical School, that any man can follow, and a loved one can encourage.

Get regular checkups. A routine physical is taking the right step to improve his chances of living a longer, healthier life. Take part in screenings including a colonoscopy and prostate cancer screening. Focus on heart health. Remain physically active and maintain a healthy diet. Find ways to manage stress, such as exercise, meditation and time management.

The gift of a lifetime

The research shows that fatherhood offers a significant win-win proposition for fathers which extends to their children. While not absolute and without some downsides, fatherhood seems to position men with the opportunity to leverage the emotional drive that emanates from their parental responsibilities. Most fundamentally, to be there for their children and be healthy enough to meet their needs. Sadly, too often this opportunity goes unused.

A big difference this year is that COVID-19 highlighted the vulnerability of men and revealed the consequences of unhealthy behavior in a much more immediate fashion. Perhaps this added context will make 2021 different. That's up to the fathers and the people that love them.

Make this Father's Day the one that starts you on a new path of health and happiness. And, to those who love a man, give him the gift of health by encouraging him to commit to these simple steps and use your power of persuasion. No exaggeration, it would truly be the gift of a lifetime.