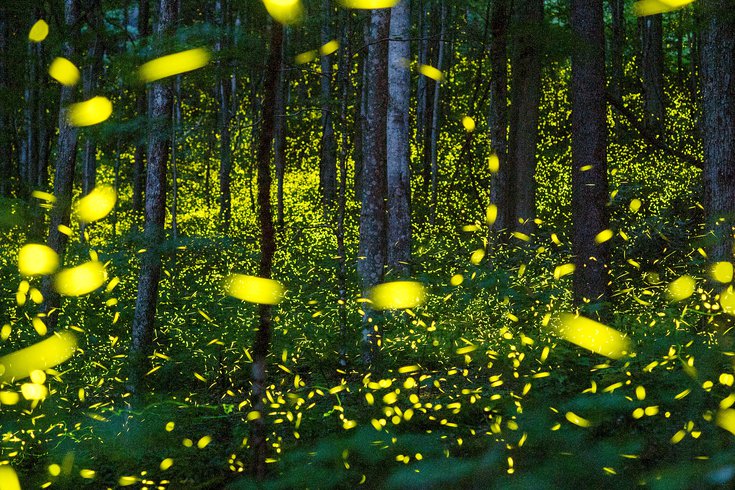 Firefly season is nearly here in Pennsylvania, though residents may have already spotted the glowing winged beetles in their backyards. Massachusetts Audubon Society is encouraging residents to track sightings and share their observation data. Pictured above are synchronous fireflies in Great Smoky Mountains National Park in North Carolina.

Whether you call them fireflies or lightning bugs, the glowing insects are headed to Pennsylvania. Some may have even been spotted early, shining yellow and green in backyards just after dark.

This year, people can share their firefly observations with the Massachusetts Audubon Society, a nonprofit seeking to track distribution patterns of the insect throughout North America. Just sitting outside for 10 minutes once per week through the end of lightning bug season and submitting data can help with research.

For those looking to help, the environmental organization will ask what habitat the insect was found in and whether the grassy pasture was mowed prior to the sighting. Other things to watch out for are temperature, amount of precipitation, cloud cover, wind and amount of artificial light.

It'll be easier to see the glowing bugs on warmer nights throughout the summer, when fireflies are more likely to flash green and yellow. This is because the bugs are cold-blooded, and their activity peaks when temperatures rise.

Fireflies are most commonly seen from mid-June to July and start to become less visible around August. However, some could be seen as early as Memorial Day weekend, emerging from the soil where they spend much of their early life. Rainy, humid days throughout the state in recent weeks could be a good sign for lightning bugs, who thrive in muggy weather.

In years when summer weather arrives before the June 21 solstice, fireflies are more commonly seen weeks earlier than the start of the season. Mild winters can also be a sign of larger populations of summer bug life, so the influx of insects in backyards is not a shock, according to Farmer's Almanac.

Fireflies are actually not flies, but beetles, and each type of lightning bug found in North America are members of the same insect family. Their larvae feed on other invertebrates like snails, slugs and worms, making the insects attracted to backyards and fields filled with other insect life.

Their signature bioluminescent glow helps them attract a mate, though some female fireflies use their glow to attract males before capturing and eating them.

While fireflies may seem like an easy catch for predators, the bugs release tiny drops of blood containing toxic chemicals. Lightning bugs' signature glow often wards off predators, letting them know that the bug is toxic.

Help scientists learn about the geographic distribution of fireflies through the #FireflyWatch #CommunityScience Project. Spend at least 10 minutes once a week from now through August observing fireflies in one location. Learn more ➡ https://t.co/03Tdyb2aac. pic.twitter.com/UOvkP5oo5U

The Massachusetts Audubon Society's cause is particularly important, as experts have warned in recent years that lightning bugs are experiencing population decline.

"We're losing a lot of the insects that not only are an integral part of our natural world, but also are important for things like pollinating our food," Stephanie Wein, clean water and conservation advocate at PennEnvironment told ABC27 in Harrisburg. "And one of those types of insects that we're seeing losses (in) are our fireflies, and that loss is happening across the country and Pennsylvania."

A March 2021 study by the Xerces Society for Invertebrate Conservation found that 11% of the 128 species of lightning bugs were threatened with extinction, while more than half lack sufficient data to determine risk.

Entomologists and biologists have noted a lack of habitats, light pollution and mosquito-killing pesticides as possible causes for the decades-long decline. Dense housing and added street infrastructure and lighting can deter lightning bugs, as they use their own light to find mates and travel, rather than artificial light.

Massachusetts Audubon has a guide for observing (and even catching) lightning bugs. Once you get to know the fireflies in their habitat, it's easier to see the different types of bug flashes they emit.

Though using a regular flashlight could prove counterintuitive to helping the insects, as they need to use their own light to communicate with potential mates, using a red flashlight can allow people to more easily see the bugs without deterring them. The best way to catch a firefly is to capture it with a net and place it into a clear box.

There are more than 2,000 species of fireflies worldwide, including the Photuris pensylvanica — or Pennsylvania firefly — which became the state's official insect in 1974 after elementary school students from Upper Darby rallied state legislators to adopt the bug as a symbol of Pennsylvania.