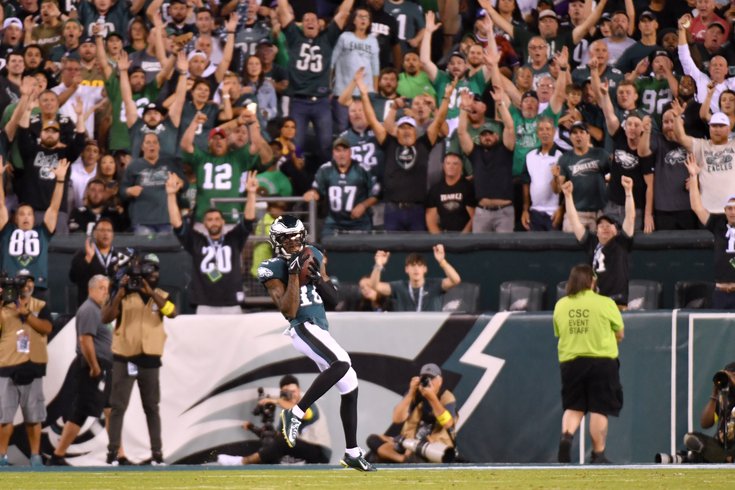 Jalen Hurts is in complete control of Philadelphia's home opener against the Vikings, with the Eagles cruising to a 24-7 lead on Monday Night Football behind a dominant effort from their QB.

• Philadelphia's offensive start against the Lions in Week 1 was clunky and ineffective. Their start to the game against the Vikings is probably the best opening drive Jalen Hurts has put together in an Eagles uniform, a masterclass of balance and precision that marched the Eagles directly to the endzone.

With strong blocking in front of him — a marked change from the trenches performance in week one — Hurts was in total control of the offense during Philadelphia's scripted start to the game. We saw a little bit of everything in the first few minutes of the game, each play showing off a different tool in Hurts' arsenal. There was a roll out to avoid pressure that ended with an 18-yard gain to Dallas Goedert down the sideline, short runs out of RPOs to chew up yards on early downs, and perhaps most notably, a strike from Hurts to AJ Brown to rescue the Eagles on third-and-long, moments after a downfield penalty wiped out a beautiful screen play executed by Hurts and Kenneth Gainwell.

Hurts' arm and accuracy starred for most of the drive, so it was fitting to see him punch it into the endzone using his legs to cap the drive, using agility and power to evade and go through different tacklers for six points.

It truly does not get much better than this for opening drives. The Eagles have not always been a fast-starting team with Hurts under center, but he had them firing on all cylinders to open it up. Excellent.

(There were some cool wrinkles to Philadelphia's setup on the opening series, including using Zach Pascal as a backfield decoy at one point. Nice creativity from the coaching staff. I also usually side with deferring when you win the toss pregame, but electing to receive and then driving right down to score really sent the Linc into overdrive in the opening quarter, so that was fun.)

• The Eagles opened the game on defense almost as well as they started on offense, getting contributions from a number of guys to force a three-and-out on the first series. With a TFL from Josh Sweat on the very first play from scrimmage, the Vikings were forced to play from behind the chains early and never made up for it before giving the ball back to Philly. Despite all the fear about Justin Jefferson going off against the team many thought would draft him, the Birds kept him in check early, with Avonte Maddox wrapping him up on second down and Darius Slay breaking up a throw that came his way on third.

(Slay may have gotten away with a hold/PI on third down, but he masked it well.)

Before things went a bit off the rails against the Lions last week, it seemed like we'd be able to say things like, "The secondary upgrades are making a difference," and I still think you've seen that shine through even with the tough finish a week prior. Philadelphia's defensive backs seem to be regularly around the ball and making plays a lot more this season, and with Darius Slay in a better spot to line up with an opponent's top guy now, they're better equipped to deal with teams who intimidate you through the air. Jonathan Gannon complaints aside, there could be big things on the horizon for this group.

• We saw Hurts have a bit of success going over the top in Week 1, but so much of that centered around a dominant day for A.J. Brown and his singular talent on the outside. The guys who starred at times last season, DeVonta Smith and Quez Watkins, were hardly noticeable against the Lions.

Well, here's one way to get noticed:

No better way to open the quarter!@JalenHurts ➡️ @Mronesx_ 53 yard 💣

Getting this open on a deep route was a direct product of the motion Philadelphia was throwing at the Vikings, the involvement of Dallas Goedert in the gameplan, and the uncertainty you could see in Minnesota every time Hurts dropped back in the pocket. And hell, let's not forget to mention that this was another great downfield throw from Hurts, who now has plenty of weapons to look for if you give him time in the pocket.

I also really enjoyed the Hurts pose after the touchdown:

This is cold, Jalen Hurts. pic.twitter.com/bctye9TkXy

When you're slinging the ball around and scoring as Hurts did through the first 30 minutes, stunt all you want.

Even Hurts' rare incompletions featured some great throws — his lofted toss to Goedert that was jarred loose on the way down is one of the best touch throws I can remember Hurts making. His control of the offense was exquisite, with Hurts seemingly making every correct read and using feints and fakes to open up space for receivers and runners alike. It was a hell of a half for No. 1, and with more efforts like these, the questions about his long-term prospects in Philly will begin to fade from view.

• You're not going to see many two-man efforts better than this one on Hurts' powerful run to pay dirt toward the end of the first half. Between Goedert's committed blocking and Hurts' refusal to be taken down before he could reach out for the goalline, this was a display of will and strength that drew roars from around Philadelphia:

Special play. That's what all those off-season workouts are for.

• Felt like I should mention T.J. Edwards somewhere in this first-half summary, as he was one of the positive standouts on defense through 30 minutes. Even when he wasn't breaking up passes or tackling runners in the backfield, he was an active presence who always felt close to the ball.

The beautiful thing about this half, though, is that they got contributions from all over the place and didn't need one or two stars to carry them toward respectability. Tackling has been better so far this year, and the coverage feels light years beyond where it was a season prior. Now if they could just get some grass stains on the QB...

• Sure looked like Hasson Reddick was asked to sit back in coverage again in the first half, Jonathan Gannon. Sure looked like he was ill-equipped for that job, too, much worse than he is at rushing the passer. Wonder if there's a way to avoid this.

• While we're on the subject of Reddick, it has to be said that the pass rush has majorly disappointed through the first 1.5 games of the season. The Eagles have always invested in the trenches and continued to do so this past offseason, and they are simply not getting a good return on their investment right now. Outside of the odd play here or there, they are not getting to the quarterback, which makes life much more difficult on the guys chasing around men like Jefferson all night.

We've seen it time and time again over the years, but you're not going to get very far in the NFL if you can't put pressure on QBs. Hurts and the offense will eventually have some low moments, and they will need the defensive line to step up in order to steer through that storm. Even when they were able to come up with a sack, they managed to piss it away with a facemask penalty on Sweat. Tough stuff.

(When Gannon sent a third-down blitz late in the half, Kirk Cousins was forced to airmail a throw to nobody that probably could have been called for grounding. The people want more blitzes, my guy. And to be clear, we're splitting hairs because this was an excellent first half for the defense overall.)

• Didn't love how conservative the Eagles were to end the half. I know they were pinned deep after a great punt from the Vikings, but with the offense in rare form to start this one, I say you let it rip.

They ended up basically backing into a decent drive anyway! Had they not pissed away valuable time, who knows, maybe Hurts leads them to another touchdown.

• The offensive pass interference call on Smith during Philadelphia's second offensive series is one of the weakest calls I have ever seen.

• Jalen Reagor urging for more noise from the crowd and getting tackled immediately on his first punt return against the Eagles is the most Jalen Reagor thing I could have imagined happening.

• There are legitimate complaints to be made about the officials in the first half of this game (see above), but some of the illegal man downfield penalties Philadelphia committed were simply egregious. Can't blame the zebras for a total lack of discipline on a quick-developing screen.