Five matchups to watch today between the Eagles and Lions 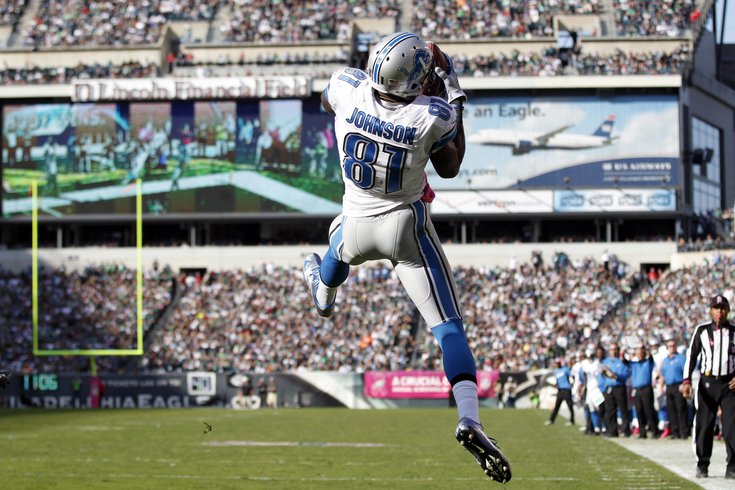 As always, Calvin Johnson will be the focus of the defense.

The Philadelphia Eagles, for the second consecutive season, will play in front of a national audience on Thanksgiving. Last year, they spanked the Cowboys. This year, they're in danger of suffering an embarrassing loss for the third straight week. Here are five matchups to watch on Turkey Day against the Lions.

Remember the wide-nine? Yeah, well, the Lions still run that garbage. While the wide-nine has a wide assortment of flaws, the one thing it does do is put pressure on opposing offensive tackles with rushers who can get around the edge. The Lions' best pass rusher is third-year player Ziggy Ansah, who has 8 sacks and 3 forced fumbles on the season. If Jason Peters can play, that will help slow Ansah and the Lions' pass rush down. If he can't, Lane Johnson will kick over to LT, where he's done a good job, while Dennis Kelly will fill in at RT, where he has not.

2) Calvin Johnson vs. the Eagles' corners

Duh. Johnson is listed as questionable, but is expected to play. Byron Maxwell's contract is hard to defend right now. He needs to step up today.

Two weeks ago, Ndamukong Suh wrecked the game, with plays like this.

For the third straight week, the Eagles will face a very good opposing DT in Haloti Ngata. It's time for the Eagles' interior OL to step up, or at least not get tossed around like they're somebody's little brother.

Is anyone going to step up and make some plays for the offense. On paper (and the paper part can't be stressed enough), the Eagles have a fantastic matchup of 6'3 slot receiver Jordan Matthews on 5'9 slot corner Quandre Diggs, who I really liked at the Senior Bowl back in January:

Quandre Diggs, CB, Texas (5'9, 196): The Eagles aren't drafting Diggs, because he's 5'9 and has 29 5/8 inch arms, but this little dude really grew on me at the Senior Bowl. He made plays on the ball all week, and stoned 230 pound Minnesota running back David Cobb cold at the goal line.

This is a matchup the Eagles would seemingly love to exploit. We'll see.

5) The Eagles vs. themselves

Players are calling each other out for being soft. The head coach has come under serious fire this week, and nobody is coming to his defense. The fans are being blamed for (rightfully) booing terrible on-field performances.

Even with the extreme measures to fill the roster with #culture guys, clearly, this is not a "team" right now. This game affords the Eagles the chance to get away from Philadelphia and kick some ass on the road under heavy adversity. Let's see what you have, Eagles.