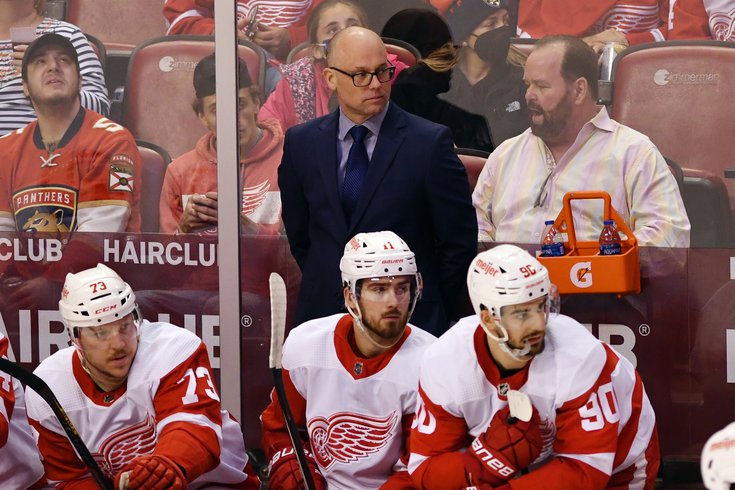 Former Red Wings coach Jeff Blashill has reportedly been interviewed by the Flyers.

The Flyers' coaching search was going to take a while. We knew that going in.

"I think we are aware of the calendar, but the important thing is to get the right coach," general manager Chuck Fletcher said at the beginning of last month. "Get the right fit and the right chemistry. As long as it takes is what we will take."

Man, are they taking their sweet time.

Per the Daily Faceoff's Frank Seravalli, the Flyers have interviewed former Red Wings coach Jeff Blashill and are going to talk to former Rangers and US Olympic coach David Quinn. They are also believed to have added recently-fired Bruins coach Bruce Cassidy to their list of candidates.

The Flyers are still in the initial wave of interviews, added Seravalli, but when they do move on to the next phase, John Tortorella is expected to get a second interview.

> #Flyers haven't reached second round of their hiring process yet, but when they do, expectation is John Tortorella will be part of it.

The list of candidates, along with their last or current role, who were reported or confirmed to have been interviewed thus far:

And the list of coaches who are also believed to be on the Flyers' radar, again with their last or current gig:

Blashill was let go by Detroit in April after seven seasons and a 204-261-72 overall run. He was behind the bench for the last of the Red Wings' 25-year playoff streak, then saw the team through a six-year postseason drought as it undertook a massive rebuild. Detroit finished the 2021-22 season with a 32-40-10 record for 74 points, well out of a playoff spot, and with a promising young core established, the club was looking to move on and take the next step forward.

Quinn also oversaw a rebuild, albeit a much faster one, in New York. He was signed away from Boston University in 2018, but rode middling results the whole way through his three-year tenure. The qualifying round in the 2020 bubble was the furthest he took the Rangers and they were swept by Carolina 3-0. Quinn was fired at the end of last season, which coincided with other changes within the Rangers' front office. They've since hired Gerard Gallant and are now battling the defending champion Tampa Bay Lightning in the Eastern Conference Finals.

Quinn was brought on to Team USA's staff as an assistant to Pittsburgh Penguins coach Mike Sullivan for the 2022 Winter Olympics in Beijing, but after the NHL's participation was canceled, Quinn was promoted to head coach of a roster consisting of college, minor league and unsigned veteran players. They were eliminated in the quarterfinal by Slovakia.

Cassidy was fired by the Bruins this week after a first-round playoff exit, an apparent dissatisfaction with his offensive tactics and deployment of younger players from the front office, and the organization now staring down a rebuild of their own. Still, Boston made the playoffs in all six seasons Cassidy was behind the bench and fell a game short of winning the Stanley Cup in 2019, all with an aging core and inconsistent depth.

Tortorella has spent this season as an in-studio analyst for ESPN's hockey coverage after spending the previous six behind the bench for the Blue Jackets, and at this point, his reputation precedes him: a hard-nosed coach who is known for getting more with less by stressing accountability and strong habits.

Word of his first interview with the Flyers was broken by fellow ESPN analyst Kevin Weekes, and host John Buccigross made a cryptic tweet Monday night in the same fashion he did to break the Taylor Hall trade to Boston last season.

On Thursday, he followed up: