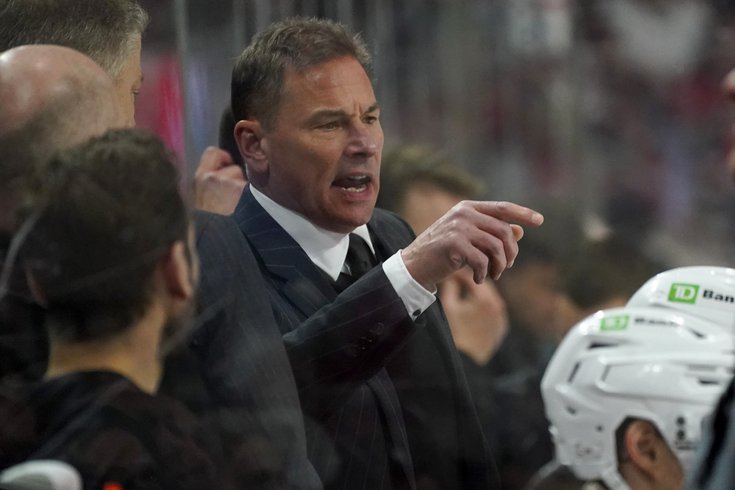 It's been quiet on the Flyers coaching front, as expected, but a new candidate might have been added to their search courtesy of the Boston Bruins.

Boston fired head coach Bruce Cassidy Monday night in a bit of a surprise move considering he had the Bruins in the playoffs in each of his six seasons behind the bench, including coming to within a game of the Stanley Cup in 2019.

The Bruins, however, have a core that's aging out  — Patrice Bergeron is 36 and now without a contract, Brad Marchand is 33, goaltender Tuuka Rask retired, and longtime captain Zdeno Chara left two seasons ago — and there was apparent dissatisfaction with Cassidy this season over his offensive tactics and usage of younger players from team president Cam Neely and GM Don Sweeney.

“There is some of that. There’s no question, players being afraid to make mistakes,” Neely said last month (via The Athletic). “Especially younger players. Because you hear about it. I was one of those players. I had to learn and grow. I heard about it too when I made mistakes as a younger player. You can’t worry about not getting back out there. I think that’s one of the things we have to change. When younger players make mistakes, they’re worried they’re not going to play the next game. Well, that game is still going on.”

Cassidy, 57, had a 245-108-45 overall record as the Bruins' coach since he took over for Claude Julien in 2017 and got the club to at least the second round of the playoffs every year since 2018 before they were knocked out in the first round this season by a high-powered Carolina Hurricanes squad.

On results alone, Cassidy should at least be worth a look. However, Flyers GM Chuck Fletcher stressed the importance of youth to his team going forward in his end-of-season press conference, and given Cassidy's issues with the development and usage of young players, he may not be a great fit.

"Part of it is we need to get younger," Fletcher said last month. "We have to get more talented. We have to get faster. We have to aggressively look at trades, free agency, and can we add a couple players to supplement what we have here and make this team better."

ESPN's John Buccigross also made some waves in the hockey world Monday night when he tweeted photos of John Tortorella and Gritty side-by-side.

Tortorella is a known candidate in the Flyers' coaching search and has already been interviewed by the front office.

What makes Buccigross' tweet notable though is that this was exactly how he broke Taylor Hall's trade from Buffalo to Boston last season. Plus, they've been working in the same building. Tortorella has been an in-studio analyst for ESPN after he and the Columbus Blue Jackets mutually parted ways last season while Buccigross has served as a host and play-by-play man.

Former goaltender and fellow ESPN analyst Kevin Weekes was also the first to report that Tortorella had been interviewed by the Flyers.

This is far from confirmation that Tortorella is the guy, but the bread trail left here does hint that he could be in the lead.

Here's a bullet point list of what is known about the Flyers' coaching search as of Tuesday:

• Tortorella, Barry Trotz, and Pittsburgh Penguins assistant coach Mike Vellucci have all been interviewed. Trotz is the top name on the coaching market after he was let go by the New York Islanders — he also has reported interest from Winnipeg, Vegas, and Detroit — but appears to be taking time to weigh all his options, which could include an eventual transition into the front office.

• The Flyers had interest in Calgary Flames assistant coach Kirk Muller, per Elliotte Friedman on the 32 Thoughts podcast from May 27, and were believed to talk to Rick Tocchet at some point though it isn't known if those conversations have happened yet. St. Louis assistant and former Dallas head coach Jim Montgomery was also said to be on the Flyers' radar and both he and Muller have been free for interviews since both of their teams were knocked out of the playoffs.

• For better or worse, the Flyers are taking their time with this one. "One thing to keep in mind though with the Philadelphia Flyers coaching search: I don't get the sense that the Philadelphia Flyers are in any hurry here to name a coach," said Sportsnet's Jeff Marek on the May 21 Hockey Night in Canada broadcast. "They want to take their time, they want to be thorough, even if that means they miss a candidate along the way."