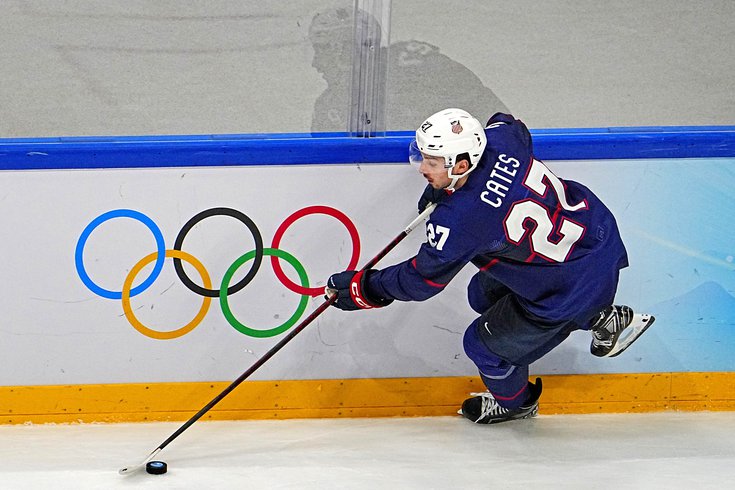 Flyers forward Noah Cates when he was playing for Team USA at the 2022 Beijing Winter Olympics.

The Flyers are using what's left of this lost season to evaluate what they have, and starting with Noah Cates, they'll focus on what's been brewing in the college ranks.

Cates was signed two a two-year entry-level contract on Sunday, and will join the Flyers Tuesday at Minnesota in the final of the team's five-game road trip. He'll wear No. 49, and should be in comfortable surroundings, as him hometown of Stillwater is about a half-hour drive away from the Xcel Energy Center.

The 23-year old winger was originally drafted by the Flyers in the fifth-round of the 2017 Draft, when he was playing juniors with the Omaha Lancers of the USHL. Cates went on the to University of Minnesota-Duluth and the NCAA, where he's spent the past four seasons, and the last two as the Bulldogs' captain.

Along with his brother, Jackson, who is also in the Flyers' system, Cates' play helped Minnesota-Duluth to a National Championship in 2019 and another Frozen Four appearance in 2021.

After the NHL pulled out of Olympic participation, Cates also made Team USA and was designated as one of its alternate captains, scoring a goal in an 8-0 opening blowout of China, and finishing America's brief run with a plus-2 rating.

Noah Cates (@NHLFlyers) had a pair of assists in yesterday's @UMDMensHockey win over Denver.

Cates practiced with the Flyers on Monday, although it isn't clear yet what his role in the lineup will be Tuesday night.

“He has a high hockey IQ…He’s the type of player all coaches want to work with…I’m excited to work with him and excited that he’s a Flyer.”- Mike Yeo on the arrival of Noah Cates. pic.twitter.com/6iAPrzyZ6Q

Billed as a responsible, two-way forward, Cates likely won't coming flying out of the gate with flashy, highlight reel goals. But he can probably be counted on to keep things contained and make the smart play to get the puck moving the other way. He'll definitely have his work cut out for him against one of the better, faster-paced teams in the Wild.

Cates' Bulldogs lost to Denver in the Elite Eight of this year's NCAA Tournament, and there's a chance another high-profile college prospect could be on his way to the Flyers once the Pioneers are done: 2019 second-round pick Bobby Brink, who 56 points (14 goals, 42 assists) in 39 games this season.