What they're saying: Flyers definitely not at home away from home 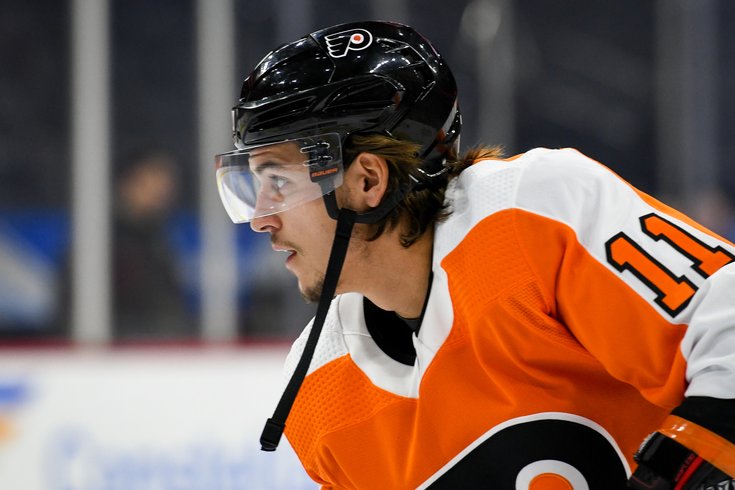 If the Flyers played all of their games at the Wells Fargo Center, they'd be the third best team in the entire Eastern Conference and fourth best in hockey.

If they played all of their games against their fellow Eastern Conference teams, they'd be in line for home ice advantage in the playoffs (if they started today).

If they played all of their games on the road, well, they'd be among the NHL's worst and a contender for a top draft pick.

Flyers fans are used to "what-ifs," and after seeing the team struggle out west and on the road (where they've lost three of their last four in convincing fashion), a team that showed championship potential in spurts back in 2019 looks to be the same old Flyers in 2020.

There is clearly a disparity between the play at home and away. It's obviously not for lack of effort. Philly, in their friendly confines, is 13-9-3 when they fire more shots on goal than their opponents. Away from home, they're 4-7-1.

We'll try and explain this issue and dive into the other things they're saying about the Flyers as the All-Star Game — the first for Travis Konecny — stands just a few short weeks away:

In a highly detailed deep dive into the Flyers' issues away from home, San Filippo does a great job of laying out the main explanation: that the Flyers are not as good, or as bad, as their home/away splits suggest. They are an average hockey team. And while a hosting team has a slight coaching advantage, there is only so much Alain Vigneault and his staff can do.

Some call it a chess match in coaching. I compare it to tennis. A home coach gets to serve. A visiting coach has to return serve. Yes, those returning serve sometimes break serve, but more often than not, the server has the advantage.

Why do I offer this as an explanation for the Flyers being one of the best teams in the sport at home and one of the worst on the road?

Because coaching can only help or hurt so much. Coaches can only make a team a little bit better or a little bit worse than what they truly are, and the Flyers are the poster child for this study this season.

They are not one of the best teams in hockey, so why are they so good at home? Coaching drives that bus. When the system in place works and the structure is sound, confidence grows. Get a crowd behind you and it grows even more. Get a goaltender who thrives off that atmosphere – like Carter Hart, who would be a Vezina candidate if he just started home games – and suddenly you have a team who is very hard to beat.

Meanwhile, on the road, where coaching influence is limited, and more susceptible to error, you have to rely on talent to try and find success and, well, that’s where this team still comes up a little short.

Sam Carchidi talked to some of the players about their inability to extend their success outside of WFC and not surprisingly, the idea of it perhaps being constrained simply inside their heads came up.

“We’re trying to figure it out. It’s got to be a mental thing,” defenseman Matt Niskanen told The Inquirer.

Here's more from the veteran Flyers' beat writer a few days ago (before their most recent loss in Vegas):

After the loss in L.A., Vigneault said the Flyers had a couple of players who, "for whatever reason, don’t seem to have a lot of energy on the ice, so we’re going to have to find out why and obviously get better.”

On Wednesday, he said he didn’t want to give any specific names.

“But we are no different than any team in the league," he said. "You need your goaltender to make key saves at the right times, and you need your top players -- forwards and D’s – to play at a top-end level..”  [Inquirer.com]

A change is gonna come...

Is a shake up required to get the Flyers out of their current road-related funk? Hall thinks perhaps the fourth line is partially to blame and could use a fresh look:

When a team is going through this kind of a stretch, these types of losses trigger roster moves.

The fourth line of Chris Stewart, Mikhail Vorobyev and Michael Raffl was not good in limited time. For the Flyers to shake things up, Vorobyev feels like an obvious candidate to go back to AHL affiliate Lehigh Valley.

Maksim Sushko (four goals, six assists, plus-8) has played well for the Phantoms. Maybe the 20-year-old winger (if he's not banged up) gets his first chance with the Flyers and Raffl moves back to the middle.  [NBC Sports]

Over at The Athletic, O'Connor took the time to give individual grades to each of the Flyers' forwards — with Konecny not surprisingly coming out as the best of the bunch. Here are the grades for the team's offensive regulars through the season's first half:

As you can see, the players who we'd expect to get to high marks, for the most part, did. Here's a bit more on the All Star, Konecny who O'Conner says has played nearly flawlessly so far in 2019-10:

Konecny has been a fantastic even-strength scorer since 2017-18, and that hasn’t changed this year. What has, however, is the fact that Konecny is rounding out his game without sacrificing the dynamic style that makes him such a weapon on offense. Konecny’s previous career-high in even strength Corsi For Percentage was 49.87 percent — that’s jumped all the way up to a team-high 56.10 percent this year, and his results by xG have improved dramatically as well, even though he hasn’t been joined to the hip with Claude Giroux and Sean Couturier as he was during the other stretches when his advanced metrics were strong. Suddenly, Konecny isn’t merely a scorer — he’s a do-it-all winger who can be trusted to drive his line.  [The Athletic]