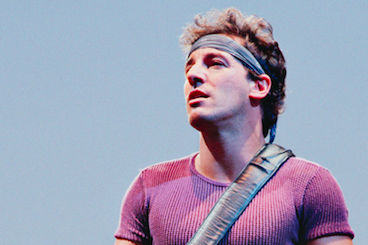 Many of the stories and photos compiled in Lawrence Kirsch's book, "For You: Original Stories and Photographs By Bruce Springsteen's Legendary Fans", come from concerts that took place and fans who call the Philadelphia region home.

Social distancing guidelines designed to slow the spread of the coronavirus have confined most Americans to their homes, leaving them searching for various forms of entertainment.

Concert-goers are now unable to attend shows and festivals for the foreseeable future, so plenty of music is being streamed to fill the void.

But one thing that may cheer up music lovers, particularly Bruce Springsteen fans, is a book titled “For You: Original Stories and Photographs by Bruce Springsteen's Legendary Fans,” by author Lawrence Kirsch.

The title, as any serious Springsteen fan would know, comes from the hit off his 1973 debut album, “Greetings from Asbury Park, N.J.”

The 200-plus page book pays homage to The Boss himself, but most importantly, to his fans. It is packed with stories told by his fans and more than 400 photos they captured from the 1970s through 2009. It include contributions from fans from 30 countries, showcasing Springsteen's wide and impactful reach.

Springsteen diehards likely will relate to many, if not most, of the stories shared. It makes one want to play some of Bruce’s music or imagine one of his iconic concerts. Plus, the books features plenty of other famous musicians who have performed with Springsteen.

There’s also no shortage of stories and images of Springsteen’s performances across the Philadelphia region either. Performances at the Spectrum, Veterans Stadium, JFK Stadium and the Wells Fargo Center in South Philly are featured. So are shows at The Main Point in Bryn Mawr, Widener College in Chester, The Roxy Theater in Manayunk and The Tower Theater in Upper Darby.

One story that particularly stands out comes from a Columbus, Ohio man who saw Springsteen perform at the Spectrum on December 8, 1980, an infamous day in American history:

On the evening of December 8, 1980, a demented young man named Mark David Chapman, who wanted to be famous, pumped five bullets into John Lennon, who died a few minutes later of his wounds. It was 11:50 p.m. I was attending a Bruce Springsteen concert at the Spectrum in Philadelphia that night. Bruce’s fifth album, “The River,” had been released that fall, and “Hungry Heart” was somewhere near the top of the charts. I was a 19-year-old sophomore in college. My friends and I had driven about three hours to the Spectrum from Carlisle, and we saw an amazing show. The Boss played for about four and a half hours that night.

The concert let out at about the time that Chapman fired the fatal rounds. Nobody told Bruce Springsteen that John Lennon had been shot, so nothing was said during the show. We were completely ignorant of events when we left the arena to head for the cars.

When we got to the car, all of the Philly radio stations were playing nothing but Beatles and John Lennon songs, and we could not, for the life of us, understand why. Finally, there was a break in the music, and we heard the terrible news. Obviously, that’s a night that is forever burned into my memory, both for the incredible show we saw, and then for the horrific events that we learned of after the end of the show.

It’s a perfect book for the coffee table and, in the meantime, to keep one occupied and entertained while social distancing at home. Less than 450 copies of the book remain, and you can order a copy here.