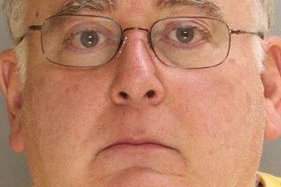 A former Archdiocese of Philadelphia priest pleaded guilty to all charges relating to the distribution of child pornography, the U.S. Attorney's Office announced Monday.

Mark Haynes of West Chester was arrested in October 2014 by Chester County Police after an Instagram account containing nude photos of a 14-year-old girl was linked to his email address.

Haynes, 56, posed as a 16-year-old girl named Katie online, requesting sexually explicit photos and videos from underage girls and distributing them on the internet.

He had last served with the church as parochial vicar at Saints Simon and Jude Parish in West Chester, a position he was removed from by the Archdiocese following his arrest. Ordained in 1985, Haynes previously served at a number of parishes in Chester, Bucks, Delaware and Montgomery counties.

A sentencing hearing is set for September 10, 2015. Haynes faces a minimum 10 years in prison with a maximum sentence of life, along with potential fines and a supervised release.

This case was investigated by the FBI in cooperation with the Chester County Criminal Investigative Division, and it is being prosecuted by Assistant United States Attorney Michelle Rotella.