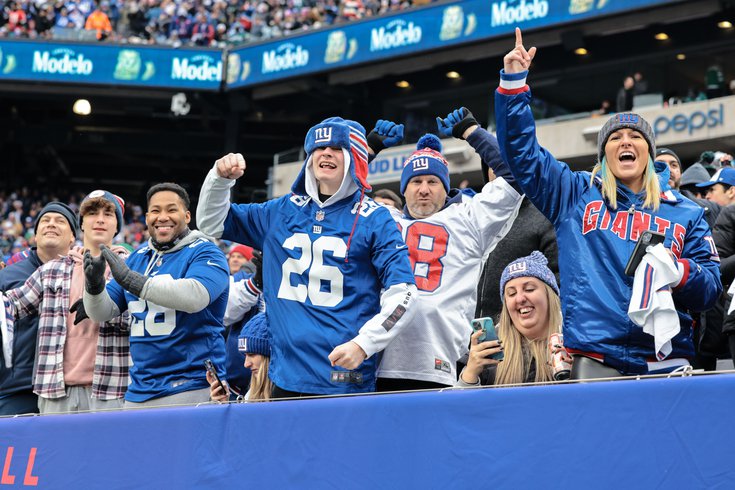 The Philadelphia Eagles sputtered in a 13-7 loss to the New York Giants at MetLife Stadium on Nov. 28, 2021. A pregame promo that aired on FOX Sports to hype up the Eagles may draw a fine from the FCC for its use of the Emergency Alert System.

There's nothing quite like the Philadelphia Eagles getting pumped up as a serious threat in the NFC East last Sunday, only to watch them self-destruct in a 13-7 loss to a hobbled New York Giants team that looked pretty terrible in victory.

Before Sunday's 1 p.m. kickoff, FOX Sports aired an over-the-top promo that treated a 5-6 team with much more respect than they had really earned. Sure, the Eagles have stormed into the playoffs from similar crossroads before, and they've looked good at times this season, but this promo is a symptom of the NFC East becoming desperately unmarketable from a competitive standpoint.

The Eagles not only proved to be incapable of multiple feats described in that promo, but the effort to put this thing together may now cost FOX Sports thousands of dollars for violating the rules of the Federal Communications Commission.

The FCC strictly prohibits "false or deceptive" transmissions of the Emergency Alert System (EAS), the beeps and boops that can only be used for authorized tests and actual disasters at the local, state or national level. This was not so much that, obviously.

In August, the FCC levied a $20,000 fine against ESPN for doing something similar while re-airing a broadcast of its "30 for 30" documentary "Roll Tide/War Eagle." In that instance, the EAS tone was used during a segment of the documentary that specifically focused on tornadoes that ripped through Tuscaloosa in 2011.

ESPN tried to fight the fine, which has a base amount of $8,000, but the FCC tacked on another $12,000 because the network had been fined previously for EAS violations.

FOX Sports doesn't even have historical tornadoes to help wiggle out of a punishment if the FCC decides to come down hard on the network. Their best argument would be that the promo preemptively alerted Eagles fans to the disappointment that awaited them. Maybe getting someone at the FCC to laugh for once would shave off a few thousand bucks out of appreciation.

The lamest part about this promo is that it included a website, "FoxNFLEmergencyAlert.com," that FOX Sports didn't even bother to register. Someone bought it and immediately used it as a slapdash dumping ground to celebrate former President Donald Trump and the conservative rallying cry "Let's Go Brandon," which is vaguely unifying people in an obscure way while directly harming the sponsorship prospects of NASCAR stock-car driver Brandon Brown, who didn't ask for this notoriety.

The guy who made the website would have been better served launching a GoFundMe for Brown and his struggling, family-owned team.

The FCC hasn't yet pounced on the Eagles promo, but there are likely grounds to do so.

The Eagles, 5-7, will try again at MetLife Stadium next Sunday against the New York Jets, a bad team that has never beaten them in the regular season. There may be an actual emergency in Philadelphia if the Eagles don't find a way to win this one.