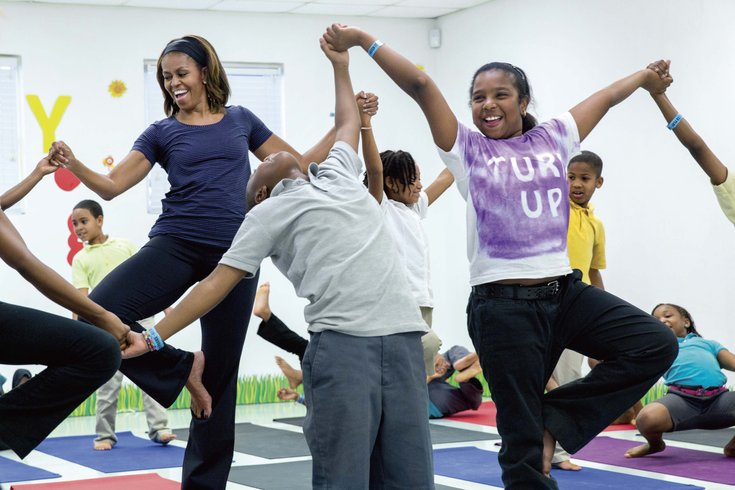 Amanda Lucidon was little more than a face in the crowd when President Barack Obama was first inaugurated on a frigid Tuesday nine years ago.

As a freelance photographer, Lucidon wanted to document the historic event. But she lacked a press credential – a strange feeling for someone who had recently worked at a newspaper.

"I got up early like everyone else and got on the bus," Lucidon recalled. "I arrived at 4 a.m. with my handwarmers and basically took pictures from the people's perspective, since that's what I had access to."

Four years later, her access to the first family increased quite dramatically.

Now, she has packaged the best – and most intimate – of those photographs into a new book.

Lucidon, 38, who grew up in Warrington, Bucks County, will discuss her book Monday at Temple University's Paley Library. The 6 p.m. event includes a question-and-answer session, as well as a book signing.

An ongoing exhibition featuring 10 photographs from the book can be viewed at the library through Tuesday.

The book paints a personal portrayal of the former first lady, showcasing her as she laughs with the family dogs, leads a group of children through yoga and shares quiet moments with her husband.

But don't expect to see many shots of Obama performing speeches.

In editing the book, Lucidon sought to include photos that were "intimate and candid and make you feel a certain way." By design, there's only one photograph of Obama standing behind a podium.

"The reason why I include that picture is that her shoes are actually off and next to her," Lucidon said. "She has blue toenail polish. Even in those moments, I love that element of surprise." 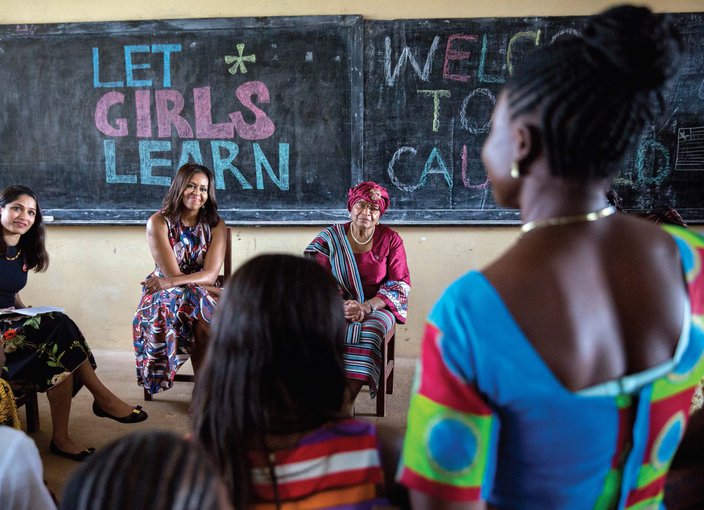 Michelle Obama participates in a discussion with Liberian President Ellen Johnson Sirleaf, Freida Pinto and students at R.S. Caulfield Senior High School in Unification Town, Liberia on June 27, 2016. 'Those girls were the group I designed the book for,' photographer Amanda Lucidon says.

Lucidon was one of four photographers who worked under Pete Souza, who served as the chief White House photographer for both Obama and President Ronald Reagan.

Lucidon, a graduate of Indiana University of Pennsylvania, met Souza while she was working on a Christmas project. She joined him and a mutual friend for lunch.

"To my surprise, a few years later he called me out of the blue and asked if I wanted to apply for the job," Lucidon said. "I was pretty sure that he had the wrong Amanda."

At the biggest events, like the arrival of a head of state, all five White House photographers would set up at different vantage points to capture a variety of images.

But when Michelle Obama would travel, either domestically or internationally, Lucidon typically was the only White House photographer to make the trip. In her four years, she traveled to 20 countries. 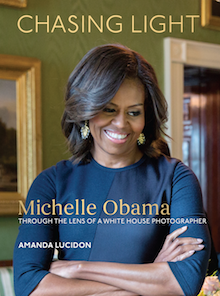 Her first international trip took was to China, where she photographed Obama embracing her two daughters, Malia and Sasha, atop the Great Wall. Later that day, she captured the first lady riding a toboggan.

"To be there with Mrs. Obama and her daughters is something I had never imagined," Lucidon said. "Everywhere I went I learned from the people that we met, and being immersed in the culture and hearing people's stories. You were constantly surrounded by inspiration."

In Liberia, the Obama motorcade once drove 45 minutes through a rainstorm to join President Ellen Johnson Sirleaf at a girls school. The roads leading to the school had washed away. The school contained a dirt floor and lacked electricity.

Once there, the students told the first lady how they walked several hours each day – often through dangerous conditions – to get to school. Following class, they had a list of chores to complete before they studied by candlelight.

"They were just so determined," Lucidon said. "When I had the opportunity to make this book, those girls were the group I designed the book for. It's not a heavy coffee table book. It's the type of book that you can put in a backpack and walk for a couple hours."

As an official White House photographer, Lucidon's role was to document the first lady. But she had freedom to do so creatively. And she often found herself trying to capture the reactions of people meeting Michelle Obama.

One image included in the book depicts a little girl gazing upward at Obama during an event at the National Zoo. The girl's look is one of complete admiration. Only the first lady's arm is seen in the photo.

Another photograph features a group of Moroccan and Liberian girls meeting Obama prior to a screening of "We Will Rise: Michelle Obama's Mission to Educate Girls Around the World." With the first lady facing away from the camera, the photo instead highlights the girls' gleaming faces as they look at her.

"It would be easy for me to focus on her in every picture," Lucidon said. "But I always liked looking at the edges of the frame, how people are reacting to her." 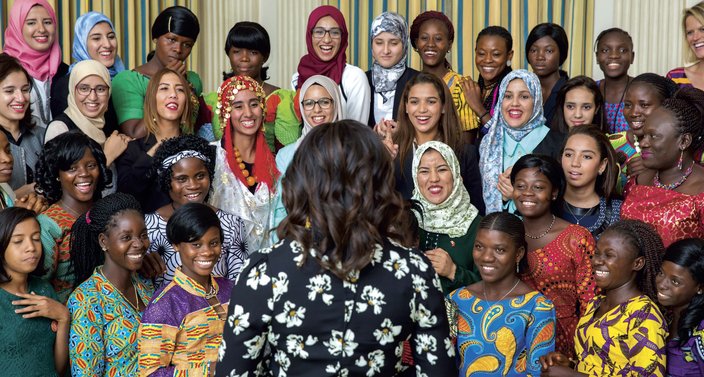 Michelle Obama welcomes girls from Morocco and Liberia in the State Dining Room before a screening of 'We Will Rise: Michelle Obama's Mission to Educate Girls Around the World' on Oct. 11, 2016. Photographer Amanda Lucidon says she enjoyed capturing the reactions of people meeting the former first lady.

During her time in the White House, Michelle Obama's approval ratings mostly remained steady – even as her husband's popularity waxed and waned. Americans admired her charisma, compassion, intelligence and confidence.

Lucidon found the Obamas to be "truly authentic" – and sought to depict that in her photographs.

"I had some friends and family members say, 'Did you hear her speak at the DNC? That was really incredible,'" Lucidon said. "My response was that's how she always talks. It's just that people were starting to listen. 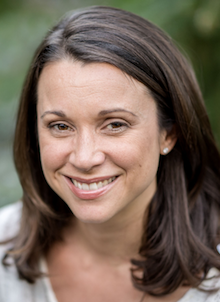 "I had those experiences all the time, because I got to travel with her and see her at all of these events. I think that she has been and always is true to her core."

That authenticity particularly was apparent when the first lady interacted with children, Lucidon said. Through her Let's Move! initative, which stressed healthier lifestyles, Obama brought children to her White House garden and led them through yoga.

"Those were the moments that she really lit up – when she was around children," Lucidon said. "I think that's the great thing about children – something spontaneous can always happen. I think you can tell from the images that she really loves kids."

Still, Lucidon's most heavily-shared photograph came from a diplomatic session.

As photographers were resetting their photos to shoot the first couple from another angle, the Obamas leaned into one another. The president rested his forehead against Michelle, whose face glowed with a loving smile.

Last year, Barack Obama tweeted the photo with a Valentine's Day message to his wife.

"There's always spontaneous moments that can happen," Lucidon said. "I barely had enough time to lift my camera up to take that picture."

"Basically, for four years I was a chronic maybe for RSVPs," Lucidon said. "I mostly didn't get to show up for many things out of work. But it was the experience of a lifetime and it was worth all the time that went into it."

The job often required Lucidon to be quick on her feet – both literally and figuratively.

"I would typically ride two or three cars behind her in the motorcade," Lucidon said. "I'd have to quickly jump out of the car and run ahead."

Lucidon had to assess the lighting and adjust her camera in an instant so she could be ready to capture the first lady as she stepped from her car and greeted the people waiting to meet her. There rarely was time to scout a location.

"It's a lot of troubleshooting on the spot," Lucidon said. "There's not much setting up. I think all of my training as a newspaper photographer prepared me for that, to be technically proficient." 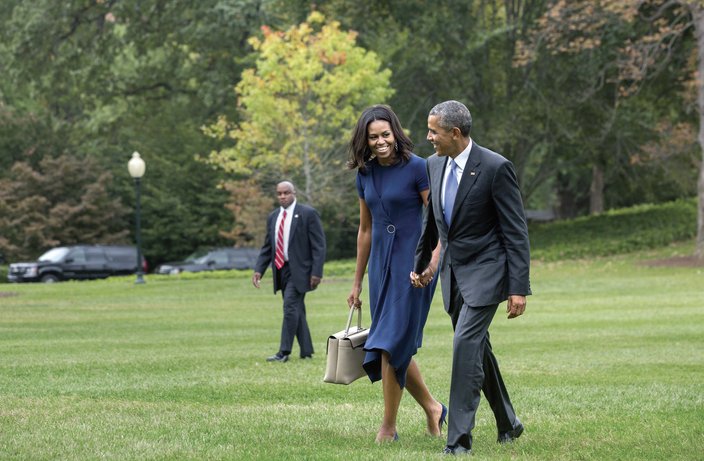 As an official White House photographer, Amanda Lucidon often photographed President Barack Obama and first lady Michelle Obama as they walked across the South Lawn from Marine One, like in this photo from Sept. 29, 2015. 'Sometimes they justed looked at each other,' Lucidon says. 'Those were images that you wanted to hold onto.'

AN EXPERIENCE OF A LIFETIME

Prior to moving to Washington, Lucidon had worked at a newspaper in Riverside, California for five years. But she accepted a buyout and headed for the nation's capital, figuring she would find an abundance of photography opportunities.

It turned out to be a good move.

Yet, Lucidon was still trying to find her footing when she headed out to the Obama inauguration on the National Mall, ready to snap some photographs of a presidency in its infancy.

Meanwhile, her father sat watching on television as the Obamas hopped from ball to ball, hoping to catch a glimpse of his daughter. He unexpectedly died the next morning.

"He was scanning the crowd in the background to see if he could see his daughter," Lucidon said. "Little did he know that I had a long way to go before I made it in the city."

Photos courtesy of Amanda Lucidon from "Chasing Light: Michelle Obama Through the Lens of a White House Photographer," published by Ten Speed Press.