Ghost guns proliferate in Philly, but new federal rule could reduce their use in crimes, prosecutors say

The number of homemade firearms confiscated by city police has surged in recent years, mirroring a nationwide trend 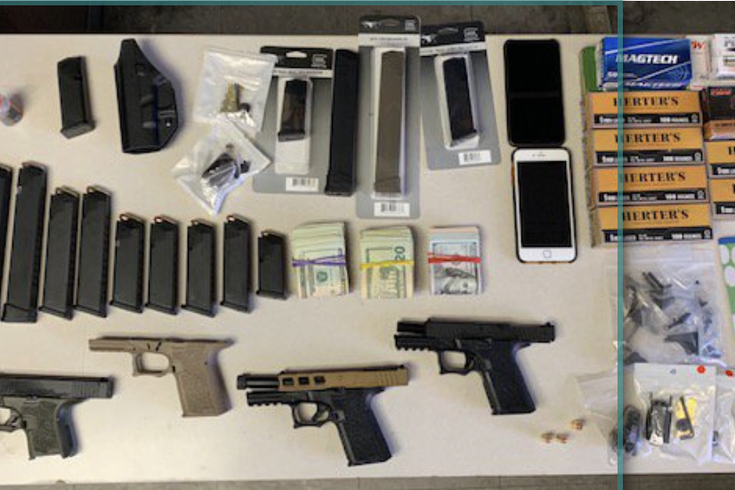 Source/Pennsylvania Office of the Attorney General

About 20,000 ghost guns – firearms assembled from kits – were recovered by law enforcement agencies in 2021, including the weapons shown above. Ghost guns can be purchased without a background check and do not have serial numbers, making them appealing to prohibited buyers.

A Philadelphia man whose criminal history prohibits him from owning a firearm was arrested earlier this month after he allegedly used a straw purchaser to buy two "ghost guns" and a .380 caliber handgun for him.

Law enforcement officers watched a woman purchase the weapons for Ricardo Williams, 36, at gun show in Morgantown, Berks County, using money provided by Williams, Philadelphia prosecutors said Monday. The woman allegedly handed the firearms to Williams, who has a history of robbery, burglary and narcotices sales.

After securing a warrant, police raided Williams's apartment on July 14. They seized six handguns, multiple rounds of bullets and two ghost guns that were not fully assembled. Williams has been charged with eight counts of illegally possessing a firearm and one count of conspiracy.

"We're grateful for the Gun Violence Task Force and our law enforcement partners for their thorough investigation into the defendant's illegal activities," District Attorney Larry Krasner said during the press conference.

The charges marked the latest example of the proliferation of "ghost guns" – firearm kits that are assembled by individuals rather than gun manufacturers. Anyone can purchase the kits, including people who are prohibited from owning firearms, because they do not require clearance checks. They also are available online, making them accessible to minors.

This lack of regulation makes ghost guns appealing to gun traffickers, prohibited purchasers and domestic abusers, according to Brady United, a gun control advocacy group. They also are considered untraceable because they do not have serial numbers.

As the popularity of self-assembled guns has grown in recent years, the Philadelphia Police Department has seen a stark increase in the amount seen on the streets. Nearly 1 of 10 guns seized in the city is homemade, police said late last year.

As of June 22, Philadelphia police had confiscated 256 ghost guns this year, Deputy Commissioner Joel Dales said last month. Last year, the police department seized 571 of them. But only 107 were seized in 2018 and 2019 combined.

Across the United States, there were some 20,000 ghost guns reported to the Bureau of Alcohol, Tobacco, Firearms and Explosives as being recovered by law enforcement agencies last year – a ten-fold increase since 2016.

In April, Daniel Whiteman was arrested in Philadelphia for 3-D printing ghost guns in his Roxborough apartment. Whiteman allegedly assembled at least six guns and was in the process of assembling another when investigators showed up at his home. Whiteman had a previous robbery conviction that prohibited him from legally possessing guns.

At the time of the arrest, Gun Violence Task Force Supervisor William Fritze said that cracking down on the danger of ghost guns hitting Philadelphia streets was a top priority.

Earlier this year, President Joe Biden set a rule to regulate ghost guns and combat gun violence. The rule stated that ghost guns qualify as firearms under the Gun Control Act, which requires manufacturers to include serial numbers on the kits' frame or receiver. Commercial sellers must become federally licensed and run background checks prior to a sale.

Additionally, if a person sells a privately-made gun, the dealer must attach a serial number before reselling it.

The rule is set to take effect next month but has drawn a legal challenge. Last week, a group of Democratic attorneys general, including Pennsylvania's Josh Shapiro and New Jersey's Matthew Plakin, filed a court brief urging a federal judge in Texas to reject the challenge.

"Without meaningful federal oversight, unserialized guns have regularly fallen into the hands of prohibited persons, with often deadly results," the attorneys general wrote.

According to the City Controller's database, there have been 1,309 shooting victims in Philadelphia this year; 272 of them have died. The database does not state how often ghost guns were used in those shootings.

Its database included 5,181 guns that were listed with unknown manufacturers, but only 82 of them could be traced back to a gun dealer. There were 126 guns made from Polymer80 gun kits. None of them were recovered prior to 2018. But in 2020, there were 120 recovered, highlighting the increased popularity of ghost guns.

The database also shows that 51% of guns in Philadelphia associated with crime came from in-state dealers.