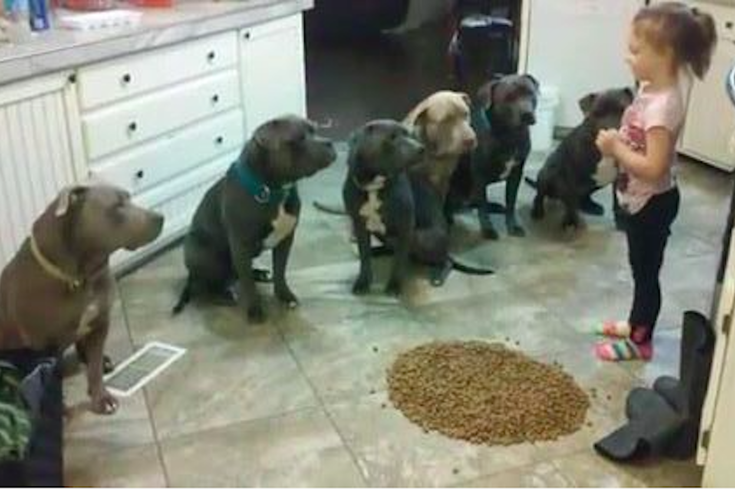 A video of a 4-year-old girl feeding six hungry pit bulls has sparked online controversy, especially among dog lovers. The identity of the Port St. Lucie, Florida girl and when the video was taken was not immediately known.

The viral clip, which shows the young girl politely ordering the dogs to sit, stay, and then eat, has several animal advocates speaking out on social media:

"The little girl is awesome, the dogs are awesome, but the entire recipe of that video and the risk involved for the breed is not awesome."

In the video, originally posted to Facebook, a female's voice can be heard saying, "Six male pit bulls. People say it can never be done. They live and eat together. They're a family. That was a 4-year-old that was able to tell those dogs what to do and when to do it. Thank you. Have a great day. And love your pit bull."

While the intended message of the video may be to shed a positive light on the breed, many have argued that the girl was at risk given the unpredictability of the animals.

"Saying this nicely......Please stop sharing and tagging me in the video of the 4 year old feeding 6 pitbulls by dumping a pile of food on the floor, the little girl is awesome, the dogs are awesome, but the entire recipe of that video and the risk involved for the breed is not awesome. I will not argue about it so dont try, that is my educated opinion on the video, period."