'This behavior and this hatred is taught,' Gisele Fetterman says of incident in Allegheny County 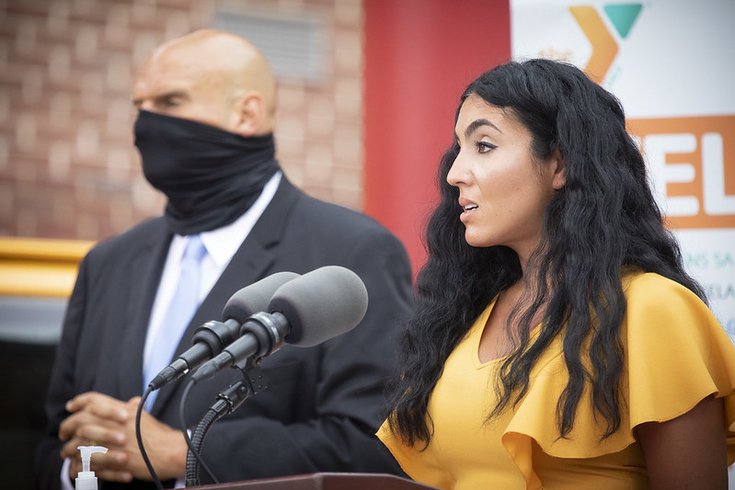 Gisele Fetterman, Pennsylvania's second lady, filmed a disturbing video of a woman calling her a racial slur in a grocery store parking lot. The incident is under investigation. Above, Fetterman speaks at a press conference in August.

Gisele Barreto Fetterman spoke out on Twitter on Sunday night after she was verbally harassed with racist language at a grocery store near Pittsburgh.

Fetterman, the wife of Lt. Gov. John Fetterman, shared a brief clip in which a woman directed a racist slur at her while she sat in her vehicle in an Aldi parking lot. Fetterman was born in Brazil and moved to New York City with her family when she was eight years old.

In an interview with the Washington Post, Fetterman said the woman in the video began to verbally assault her as she stood in a check-out line in the Braddock, Allegheny County store.

The woman repeatedly directed the n-word at Fetterman until another customer offered to walk Fetterman out to her car, she said. The woman followed her there. Just as she was leaving, Fetterman took the video.

Warning: The video included in the tweet below contains a racial slur.

*TRIGGER WARNING* I love love love this country but we are so deeply divided. I ran to the local grocery store and was met by and verbally assaulted by this woman who repeatedly told me I do not belong here. The confrontation continued into the parking lot where I was able to pic.twitter.com/kzSoxCVJ2x

finally capture it after the crying winded down. This behavior and this hatred is taught. If you know her, if she is your neighbor or relative, please, please teach her love instead.

The Second Lady typically travels with a security detail, but decided to run an errand at the grocery store by herself. She reportedly sent her detail a picture of the woman's license plate. Pennsylvania State Police are investigating the incident.

Fetterman, who was an undocumented immigrant, received her green card in 2004 and married John Fetterman in 2007, the same year he became mayor of Braddock. He was elected to his current position in 2018.

The incident comes less than a month before the presidential election. During his re-election campaign, President Donald Trump has played to racial tensions by initially failing to condemn white supremacists and claiming low-income people of color are "ruining" the suburbs.

Today at the grocery store, PA’s Second Lady @giselefetterman was subjected to a racial slur and taunts. As she said: “this hatred is taught.” It’s on us to teach our children kindness, acceptance and inclusion, and condemn hate whenever and wherever we see it.

Gov. Wolf later tweeted a statement of his own.

The ethnic intimidation and hate speech spewed at the Second Lady of Pennsylvania is shameful and unacceptable.

Racism is always unacceptable and unworthy of Pennsylvanians.

No one should ever be made to feel unwelcome in our commonwealth because of their race or ethnicity.

Gisele Fetterman spends much of her time making our state and world a better place and she — and every Pennsylvanian — deserves our respect, not the hatred too often displayed by people who seek only to further divide this country at a time when unity is so desperately needed.

The Second Lady has my and Frances’s full support and gratitude for her tireless work to make Pennsylvania the diverse, inclusive place it is today, even in the face of such ignorance and adversity.

It's not yet clear whether the woman seen in the video, if identified, could face charges in the incident.